Over 4,000 people have gone missing since 2011, and activists and family members are questioning the government’s silence. 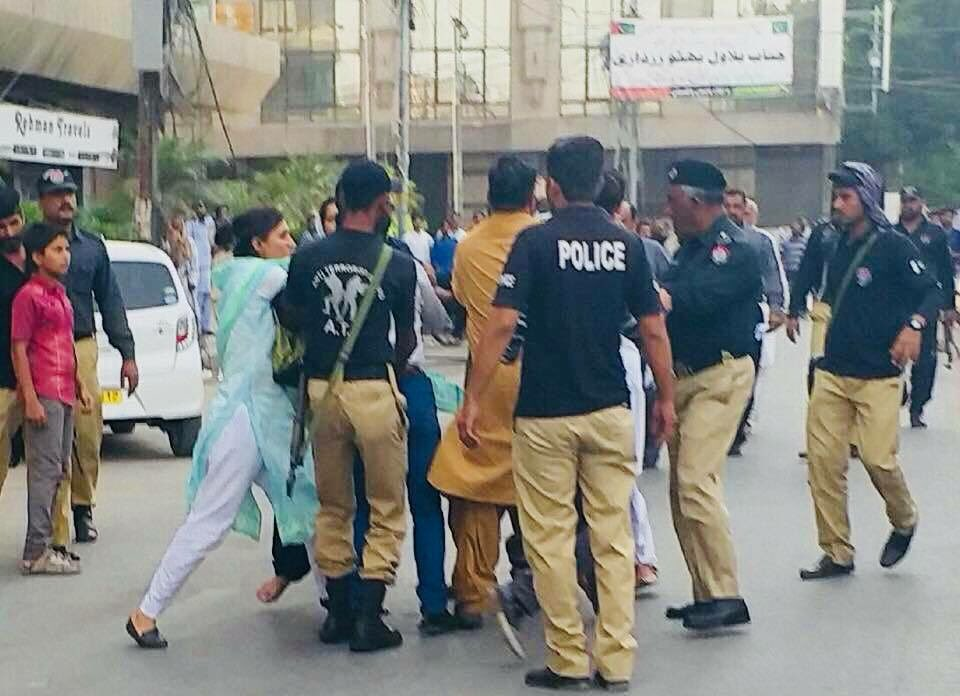 Karachi (Pakistan): Even after being in the national and international news for years, the menace of enforced disappearances in Pakistan is far from over, thanks to the lackadaisical attitude – or even tacit involvement – of state authorities. More than 4,000 cases of enforced disappearances have been reported, and the victims and their families are still awaiting either recovery or justice, as the case may be.

Reports claim that those who have been harassed and have gone missing include activists, bloggers and journalists. Activist Raza Khan from Lahore, Punjab, went missing on December 2, 2017. He was a member of Aghaz-e-Dosti (Initiation of Friendship), an initiative that promotes peace between India and Pakistan.

Voices against enforced disappearances are being heard from various parts of Pakistan. For instance, the Voice for Baloch Missing Persons held a long march, led by Abdul Qadeer Baloch, also known as Mama Qadeer Baloch, on foot from Quetta to Islamabad in 2014.

Manzoor Pashteen from Khyber Pakhtunkhwa led the Tahafuz Movement for the Pashtun minority to raise their voice for missing persons in the country.

Sindhi women members of the forum Voice for Missing Persons of Sindh led a 72-hour hunger strike from May 20-22, 2018 in Karachi, the capital of Sindh, demanding the release of their abducted family members.

State police resorted to violence against a non-violent protest at the Karachi Press Club in order to remove a camp set up by the women. Local police were seen beating up protestors and behaving cruelly towards women. A young woman’s shirt was torn.

“We saw some people in civilian dress moving around the camp when one of them, whose face was covered with a piece of cloth, started chanting anti-state slogans. When I pointed out the man who was chanting the slogans, he went to stand behind the forces. I think authorities send such people to disturb the situation in such events. State police arrested protestors and misbehaved with young ladies,” said Assad Butt, focal person of the Sindh chapter of Human Rights Commission of Pakistan.

Butt added, “I begged them not to turn the situation into a war zone. These people were in anguish, and they wanted to know the whereabouts of their family members legally. It is not an unconstitutional demand, and the state ought to listen to them.”

“Hunger strike was our last option to shake the authorities who have not heard our cries for justice for 14 months,” said Sassui Lohar, daughter of Hidayat Lohar, a school teacher who was abducted on April 17, 2017 from school premises. “We moved from one police station to another to lodge a First Information Report (FIR).We were told by the police that our father had been taken by high authorities and that they could not register an FIR,” said Sassui.

After the abduction of her father, Sassui said, her family has been going through a tough time. “I and my sister, Sorath, who is with the forum for missing persons, stopped studying due to our worsening financial condition and started working to support our family and also to continue the struggle for Baba (father).”

“When your protector turns against you, what hope of protection can you have from the government?” asked Sassui.

“Our people were holding a peaceful protest; we did not even utter a harsh word against them. The authorities conveyed through their behaviour that something bad might happen to us,” Sassui said, narrating the situation at the hunger strike camp. “Even though we tried to avoid them, one man who was later identified as belonging to the forces, suddenly abused, beat and arrested our people,” she said.

“I refused to change my clothes which were torn by the police until the authorities came and we showed them how their men had behaved with us. We are not the only ones to suffer; many families from across the Sindh, as well as many other parts of Pakistan, are suffering,” Sassui continued. 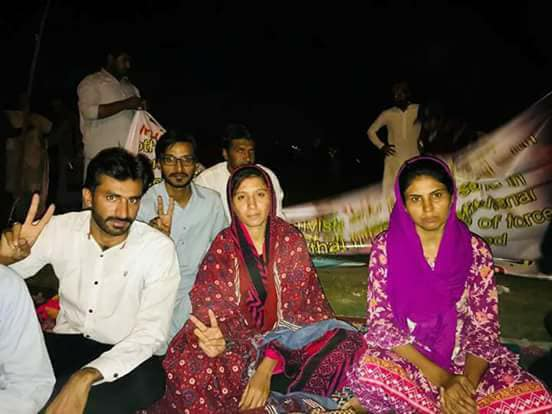 Tanveer Areejo, whose father, Khadim Hussain Areejo, was taken on April 17, 2017 from Hyderabad, said, “My father, who works with the government, was abducted on his way to work along with my cousin. However, they later released my cousin, who told us how some people came in big cars, carrying guns. My cousin was told, ‘You could go now, and your uncle will come after investigation’.”

“There are people with different opinions in Pakistan. But that does not mean that they should be arrested for their beliefs. Moreover, my father was not affiliated with any political party. He was 57 years old,” said Areejo.

“I never imagined that one day I would become the leading voice of the missing persons’ forum, Sindh,” said Sorath, Hidayat Lohar’s other daughter and deputy convener of VMP Sindh. Initiated by all political parties of Sindh, the VMPS forum itself came under stress when its convener, Puhnal Sariyo, was also abducted. Sariyo was later released, but he could not continue his work at the forum due to health issues. So the responsibility of raising a voice for the 160 missing persons in Sindh fell on Sorath’s shoulders. “I told myself that I must accept it and challenge myself to fight for our fundamental rights,” she said.

Sorath complained that whereas internationally acclaimed terrorists such as Hafiz Saeed had the right to hold protests, those who expressed different opinions were being abducted.

“We are being punished for having views on human rights,” said Sorath.

She added, “We are not asking anything undemocratic. We are simply asking them to show us our family members and to present them in the court if they have committed any wrongdoing. If our demands our illegal, they should tell us that what we are demanding is unconstitutional. They don’t realise the sorrow, the struggle for survival and mental torture we are facing at the hands of state authorities.”

“I have felt that having an education gives me the strength to raise my voice for justice. But what happens to families whose children are being taken from villages and whose voices have fallen on deaf ears?” asked Sorath.

The family of Inaam Abbasi, a magazine editor who was also abducted, said that Abbasi was involved neither in any political activity nor in anti-state activities. Ironically, his magazine had taken projects from the Sindh cultural department. How was it then possible to go against the state with controversial political activities? they asked.

This number is dismissed by activists as a gross underestimate. Wahab Baloch, president of the Baloch Rights Council, said that 14,000 people have been abducted from Balochistan and another 32,000 from Khyber Pakhtunkhwa. 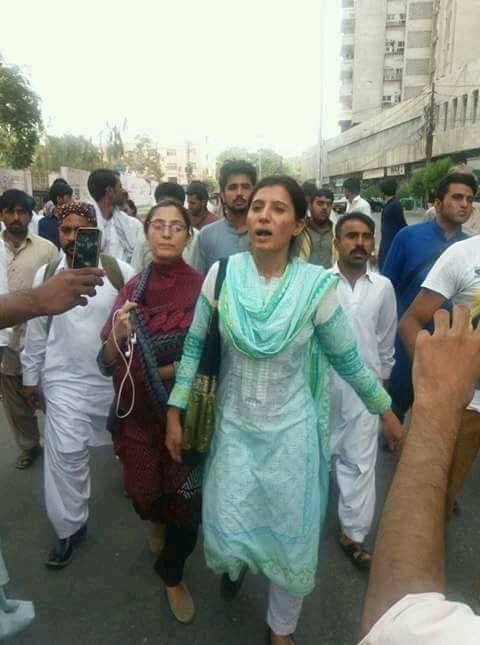 In Sindh, almost 200 persons are missing, of whom 160 are Sindhis, 24 belong to the Christian minority and 26 are Shia, said Assad Butt.

Butt added that the state authorities did not accept the numbers being provided to them. Unlike in other cases, there is CCTV footage in the cases of missing Shia persons which clearly show who had taken them away. Despite such proof, the judiciary and the authorities are still in denial.

In the case of Raza Khan, state authorities say that they have no idea about his whereabouts.

“I do not see a fair system in the society; we have to pay a bribe to get a hearing date. Otherwise, we are given a long list of pending cases. I personally hate paying a bribe, but I have no option but to approach the judiciary for recovery of my Baba. So I paid around 4,000-5,000 Pakistani rupees for each hearing date,” said Tanveer Areejo.

Many cases of enforced disappearances are still pending in the court due to the lack of seriousness on issues of human rights.

Sorath said that the family members of missing persons go through a difficult process during hearings. They are asked to pay money to the police for providing clothes to the missing ones. “When the abductees are not in the custody of the local police, how can they take money from the poor families?” she asked.

According to Sorath, the home minister blamed dacoits, claiming that they could be behind the abductions. “But who is responsible for protecting us even if dacoits abducted our family members? Would those who blamed the dacoits for the disappearances give us justice?” she asked.

“Sorath, Tanveer and Sassui are brave Sindhi women who have the courage to ask for their fundamental rights. HRCP always supports all victims, no matter where we have to hold protests, including in front of the offices of the security forces. Now the time has come to solve these issues according to human rights and constitutional laws,” said Assad Butt.

Sorath and Tanveer both seemed confident of getting justice. They said that they were humiliated during the hunger strike, but they were also getting more strength and support from various part of the society.

When they began to raise their voices, they were alone, with support from only a small number of people. “But things have changed now, and voices of support are coming in from Punjab,” said Wahab.

“Our movement will not stop until all our family members are released. We are asking for our fundamental rights that are written in the constitution of Pakistan,” said Sorath.

Veengas is a Karachi-based journalist who focuses on human rights and political issues. Twitter: @veengasj