Visa in Hand, Brothers Reunited After Partition Can Now Spend More Time Together

A video of Sika Khan and Mudammed Siddique reuniting in Kartarpur after nearly 75 years had gone viral on social media. 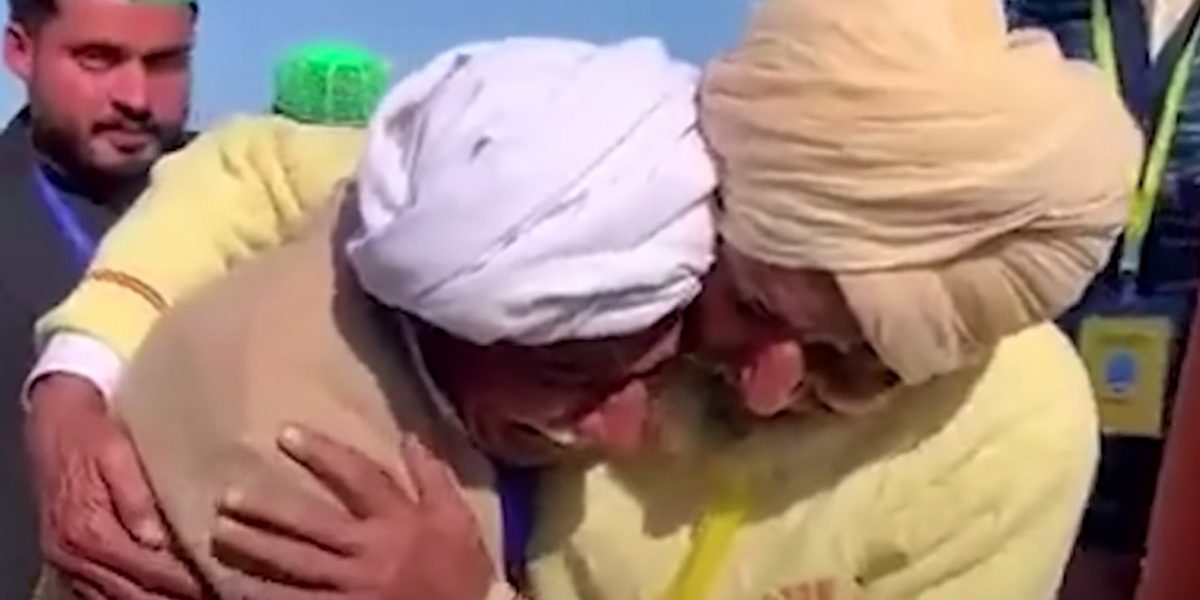 Chandigarh: Two brothers separated during the 1947 Partition and recently united at the Kartarpur Gurdwara for a brief period will finally be able to spend a few weeks together.

The Pakistan High Commission in Delhi on Friday (January 28) issued a two-month visa to Sika Khan of Punjab’s Phulewala village in Bathinda district to visit his brother, Mudammed Siddique, in Pakistan’s Faisalabad.

This comes after the video of the tearful reunion in Kartarpur, showing the brothers meeting and hugging each other after 74 years, had gone viral. Their meeting, however, did not last more than an hour, as both had to return to their respective countries.

After that, efforts began to send Sika to Pakistan, so that the brothers could spend a few days together. Jagsir Singh, from Sika’s village, told The Wire that both the Indian and Pakistani authorities played a proactive role in issuing Sika’s visa.

“He will leave for Pakistan in the next two-three days. His brother’s family will meet him at Wagah border and then take him to Faisalabad,” said Jagsir.

“I can’t tell you how happy I am. I am thankful to everyone who helped me get a visa,” Sika Khan, now 75, told The Wire as he was returning home from the high commission office in Delhi.

The Indo-Pak partition along Punjab and Bengal was one of the bloodiest chapters in the history of the subcontinent, wreaking havoc on millions of lives. Thousands separated from their families in the course of this mayhem. Their pain has been immortalised in several novels and films such as Khushwant Singh’s Train to Pakistan, Amrita Pritam’s Pinjar, Bhisham Sahni’s Tamas, M.S. Sathyu’s Garam Hawa and Sabiha Sumar’s Khamosh Pani.

One novel, Karmawali, written by former chairman of the Haryana Urdu Akademi Kashmiri Lal Zakir, was based on true events similar to the separation and meeting of these two brothers. The novel revolved around a woman named Karmo who lived in Punjab before Partition.

When Partition-related rumours began to circulate, she and her family left for Pakistan and lost her son, Khushia, in chaos. A Sikh family finds him and raises him. Years later, Karmo is able to meet her son again.

The story of these two brothers is equally tragic, yet it embodies a sense of hope.

Jagsir Singh told The Wire that Sika’s mother was originally from Phulewala village (where Sika lives) and was married to a man from a village in Jagraon near Ludhiana.

At the time of Partition, the brothers’ mother had come to stay in her maternal home in Phulewala village with her younger son Sika, who was barely six months old. Soon the situation became tense. Tens of thousands of people were displaced, killed and forced to flee. When things settled, it was found that Sika’s father and his elder brother were not in Jagraon.

His maternal uncles went to look for them everywhere but could not trace them. Her mother died by suicide months later, leaving young Sika in the lurch.  “He then grew up in the village at his maternal uncles’ home and still stays with them,” said Jagsir.

He said since the time Sika found out about his family background and the pain of Partition, he always hoped that his father and brother would be alive and he would meet them one day. And in 2019, when a Pakistan-based forum Punjabi Lehr ran a story on Mudammed Siddique, now 84, on their YouTube channel, the two brothers found each other and got back in touch.

With the opening of the Kartarpur Sahib corridor that allowed pilgrims from India to visit the Sikh shrine in Pakistan, both sides planned their union on March 23, 2020. Two days before that, however, the COVID-19 lockdown was announced and the corridor closed indefinitely.

“It was only one and a half years later, on November 17, 2021, that the Kartarpur corridor was reopened. This is when we re-planned their union and reached Kartarpur this month, on January 12,” said Jagsir.

He said emotions ran high and tears did not stop when the brothers met each other. The entire village is now happy that Sika will finally spend a few days with his brother – something he has been longing for his entire life.

Jagsir said that Sika is not very well off; he works as an agricultural labourer. The whole village collected money and bore the expenditure of his Kartarpur visit. Again, people in the village will collect some money to make sure that he has a comfortable journey to Pakistan and returns back safely to his village, said Jagsir.

“We all are happy that his life that began with a tragic tale has a happy ending now. What happened in 1947 can’t be reversed. At least they both can now share the pain and joy together, before the end of their lives,” said Jagsir.

Meanwhile, soon after issuing the visa to Sika Khan, the Pakistan High Commission in Delhi tweeted that the story of the two brothers is a powerful illustration of how the historic opening of the visa-free Kartarpur Sahib corridor in November 2019 by Pakistan is bringing people closer to each other.

The commission also shared Sika’s video thanking everyone for uniting both the brothers.