Timeline: Myanmar's Year of Turmoil Since The Military Took Power in a Coup 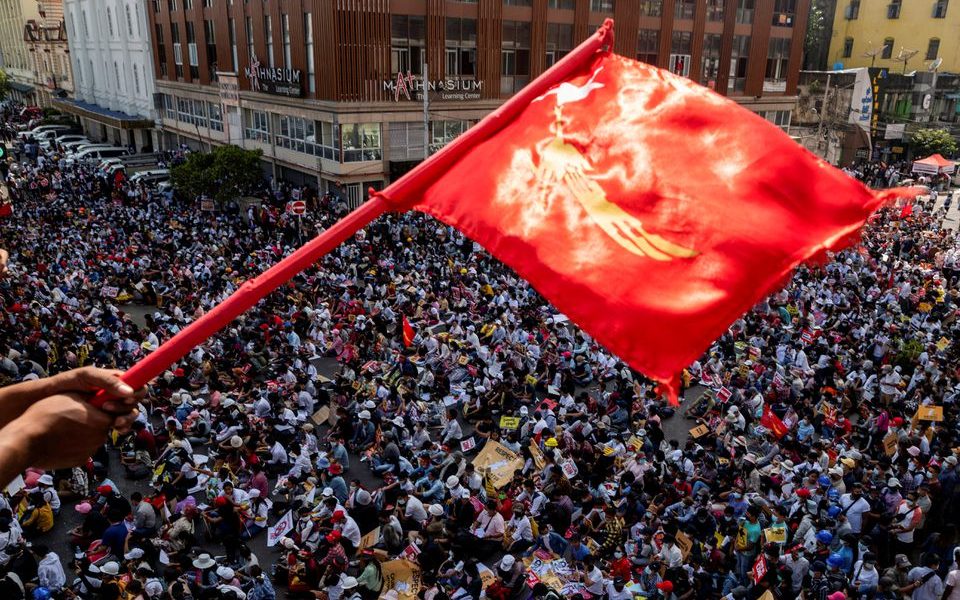 Following is a timeline of events:

The military declares a state of emergency for a year – later extended – and hands power to army chief Min Aung Hlaing.

February 3: Staff at 70 hospitals and medical departments stop work in protest. Many wear red ribbons as part of a civil disobedience campaign.

NLD offices are raided, documents and computers are seized.

Charges are also filed against the president over violating coronavirus restrictions.

February 6: Blocks are ordered on Twitter and Instagram, where protesters had been sharing information. The junta orders the internet shut down.

February 7: Protests sweep the country in the biggest show of anger since 2007 anti-military protests.

February 9: Police fire guns, mostly in the air, water cannons and rubber bullets at protesters in the capital, Naypyitaw. A woman is shot in the head and dies 10 days later.

About 1,000 supporters of the military attack opponents of the coup in Yangon.

February 26: Myanmar’s UN envoy urges the United Nations to use “any means necessary” to stop the coup. He is fired the next day.

March 2: Association of Southeast Asian Nations (ASEAN) foreign ministers hold a call with a junta representative. They urge Suu Kyi’s release and an end to lethal force against protesters.

March 4: At least 19 police cross into India saying they don’t want to take orders from the junta.

March 27: Troops kill at least 160 people as the military marks Armed Forces Day with a parade.

March 28: About 3,000 villagers flee from Karen State to Thailand after the army launches air strikes in territory controlled by the Karen National Union insurgent group.

Security forces also open fire at a funeral in Bago town for 114 people killed in a crackdown the previous day.

April 24: Southeast Asian leaders say they have agreed on a plan with Min Aung Hlaing to end the crisis.

April 27: The KNU captures an army output near the Thai border. The military responds with air strikes.

May 4: Junta-controlled media announce a ban on satellite television receivers.

May 24: Suu Kyi appears in court for the first time since her government was overthrown.

Danny Fenster, 37, an American managing editor of the Frontier Myanmar news site, is detained at Yangon airport as he prepares to fly to Malaysia.

June 8: The United Nations says some 100,000 people in Kayah State have been displaced by fighting that included “indiscriminate attacks by security forces” in civilian areas.

June 21: Min Aung Hlaing and Nikolai Patrushev, the secretary of Russia’s Security Council, commit to strengthening security and other ties at a Moscow meeting.

August 1: Min Aung Hlaing takes the role of prime minister in a caretaker government. He repeats a pledge to hold elections by 2023.

August 18: The death toll as a result security force crackdowns on protests since the coup tops 1,000, according to the Assistance Association for Political Prisoners.

October 16: ASEAN countries exclude Min Aung Hlaing from a summit citing lack of progress on its plan to end the crisis.

November 15: Fenster freed and returns to the United States after being jailed for 11 years on various charges.

December 5: Suu Kyi is found guilty of incitement and breaching coronavirus restrictions. She is set to serve two years in detention at an undisclosed location, a sentence reduced from four after a partial pardon from military chief.

January 14: Five new corruption charges against Suu Kyi, 76, are announced. In all, she faces up to 164 years in jail.