Meanwhile, protestors outside Naval Base have demanded the former prime minister and his family be held accountable for the crisis and arrested. Army soldiers walk past damaged vehicles of Sri Lanka's ruling party supporters after they were set on fire during a clash of pro and anti-government demonstrators near the Prime Minister's official residence, amid the country's economic crisis, in Colombo, Sri Lanka, May 10, 2022. Photo: Reuters/Dinuka Liyanawatte

New Delhi: Sri Lanka gave emergency powers on Tuesday, May 10 to its military and police to detain people without warrants, after a day of clashes that killed eight people and injured more than 200, in violence that prompted Prime Minister Mahinda Rajapaksa to resign.

The military can detain people for up to 24 hours before handing them to police, while private property can be searched by force, including private vehicles, the government said in a gazette notification on Tuesday.

“Any person arrested by a police officer shall be taken to the nearest police station,” it said, fixing a 24-hour deadline for the armed forces to do the same.

Some analysts expressed concern over the potential for abuse of the emergency measures.

“In a situation where there is both a state of emergency and curfew who can monitor to ensure these regulations are not abused?” said Bhavani Fonseka, of the Centre for Policy Alternatives think tank based in Colombo.

The president had already declared a state of emergency on Friday as protests escalated.

Meanwhile, a protest has begun in front of the Trincomalee Naval Base after reports emerged that that former prime minister Mahinda Rajapaksa and some of his family members have sought refuge there after leaving the official residence in Colombo, Daily Mirror reported.

Protestors have demanded the former prime minister and his family be held accountable for the crisis and arrested, the report said.

Rajapaksa, 76, resigned as Sri Lankan Prime Minister on Monday, May 9 amid unprecedented economic turmoil, hours after his supporters attacked anti-government protesters, prompting authorities to impose a nationwide curfew and deploy Army troops in the capital.

The violence saw arson attacks on the homes of at least 31 politicians, including Mahinda Rajapaksa’s ancestral house.

The ancestral residence of the Rajapaksa family in the southern city of Hambantota in Sri Lanka was set on fire by protesters hours after Rajapaksa’s resignation.

Prime Minister Mahinda’s House in Kurunegala was also set on fire by protesters while a mob also destroyed the D.A. Rajapaksa Memorial – constructed in the memory of Mahinda and President Gotabaya’s father – in Hambantota.

The houses of at least two mayors were also set on fire, police sources told Reuters. Sri Lankan media also reported that a fire had broken out near the back of Temple Trees, the official residence of the Sri Lankan Prime Minister in Colombo.

Sri Lanka‘s prime minister quit to make way for a unity government that would try to find a way out of the country’s worst economic crisis in history, but protesters said they also wanted his brother, Sri Lankan President Gotabaya Rajapaksa, to stand down.

On Monday, clashes broke out in Colombo, where supporters of the ruling party stormed an anti-government protest camp and were beaten back by police using tear gas and water cannon.

Ruling party parliamentarian Amarakeerthi Athukorala died after a standoff with anti-government protesters in the town of Nittambuwa near Colombo, police have said.

At least nine people were taken to Colombo’s National Hospital for treatment relating to injuries or tear gas inhalation. Local media reported as many as 150 were injured throughout the day.

A nationwide curfew has been imposed, on top of the state of emergency that was declared last week in the face of escalating protests. Supporter of Sri Lanka’s ruling party tugs a member of anti-government demonstrator by his shirt during a clash between the two groups, amid the country’s economic crisis in Colombo, Sri Lanka, April May 9, 2022. Photo: Reuters/Dinuka Liyanawatte

The island nation of 22 million people has suffered prolonged power cuts and shortages of essentials, including fuel, cooking gas and medicines, and the government is left with as little as $50 million of useable foreign reserves.

Sri Lankans have been taking to the streets in largely peaceful protests and demanding that the Rajapaksas step down.

In his resignation letter the prime minister said he was quitting to help form an interim, unity government.

“Multiple stakeholders have indicated the best solution to the present crisis is the formation of an interim all-party government,” the letter said.

“Therefore, I have tendered my resignation so the next steps can be taken in accordance with the Constitution.”

Nalaka Godahewa, a government spokesman, told reporters that all cabinet members had also stepped down. “Now the president will invite other political parties to form a unity government,” he told Reuters.

Local news reports have said that the resignation has also been notified through the official gazette.

On the streets of Colombo, the mood was jubilant but tense at night.

Pro- and anti-government protesters clashed for the first time since the unprecedented wave of demonstrations took hold in late March. 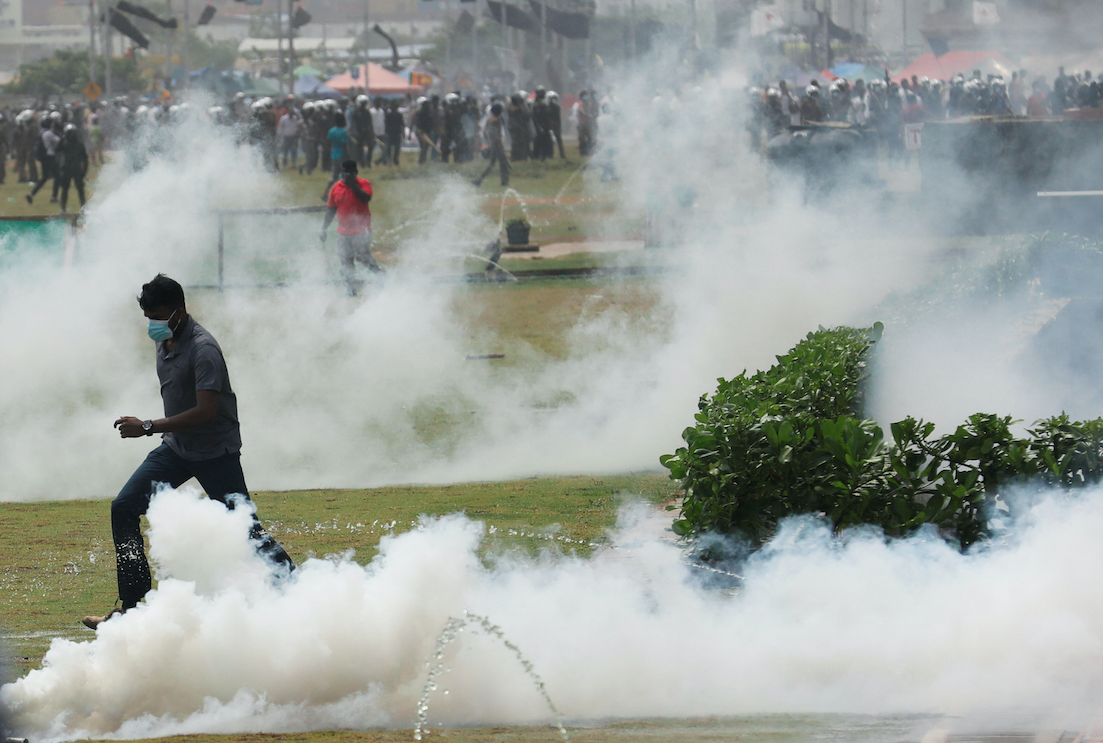 Hundreds of ruling party supporters had rallied outside the prime minister’s official residence before marching to an anti-government protest site outside the presidential office.

Police had formed a line ahead of time on the main road leading towards the site but did little to stop pro-government protesters from advancing, according to witnesses.

Pro-government supporters, some armed with iron bars, attacked anti-government demonstrators at the “Gota Go Gama” tent village that sprang up last month and became the focal point of nationwide protests.

This article, which was published on May 10 at 9:16 am, is being republished with more updates on the same date at 4:15 pm.