Shahidul Alam Taken Back Into Custody After Medical Tests

Over 250 photographers, artists, journalists and activists have issued a statement demanding the Bangladeshi photographer's immediate release. New Delhi: Bangladeshi photographer and human rights activist Shahidul Alam was on Wednesday taken to the Detective Branch of Metropolitan Police after undergoing a medical check up at the Bangabandhu Sheikh Mujibur Rahman Medical University (BSMMU) hospital in Dhaka.

The director of the hospital, Brigadier General Abdullah-Al-Harun, informed that Alam had undergone medical examinations although he did not specify what treatment, if any at all, was prescribed for the patient.

Besides, Alam was returned to the custody of the Detective Branch of Police in the afternoon itself instead of being kept at the hospital for further observation and treatment. The hospital was due to submit his health report to the high court at 1:30 am today. Alam though was not allowed to meet his lawyer.

Bangladeshi government, meanwhile, has moved through its attorney general a higher court (the appellate division chamber judge), seeking to stay the high court order for examination and treatment of Alam in a hospital. The ADC judge has referred the matter to the appellate division to be heard in the morning of August 9. Arguing that ‘Shahidul Alam had criticised the government,’ the attorney general asked for him to be placed in remand.

Recipient of the Shilpakala Padak Award (2014), Bangladesh’s highest honour, Alam was ‘abducted’ from his apartment by around 30 unidentified men in plain clothes on Sunday night. The men, who came in three cars, forced their way into the apartment building. They not only damaged CCTV cameras but also took away their hard drives and mobile phones of the security guards, according to a police First Information Report submitted by Alam’s wife, Rahunuma Ahmed.

Following national and international outcry over the abduction, the detective branch of the police announced they were going to file a case against Alam. The photographer was next produced in court in connection with a case filed under Section 57 of the ICT Act for making an online speech which ‘hurts the image of the nation’.

During the court appearance, Alam was unable to walk, and his sandals were missing. He stated to the court that he was beaten and tortured in police custody. According to witnesses, Alam showed clear signs of mental and physical abuse.

Alam is being represented in the high court by eminent jurist Kamal Hossain, along with Shahdeen Malik, Sara Hossain, Tanim Hossain Shawon, Jyotirmoy Barua and Aynunnahar Lipi among others. 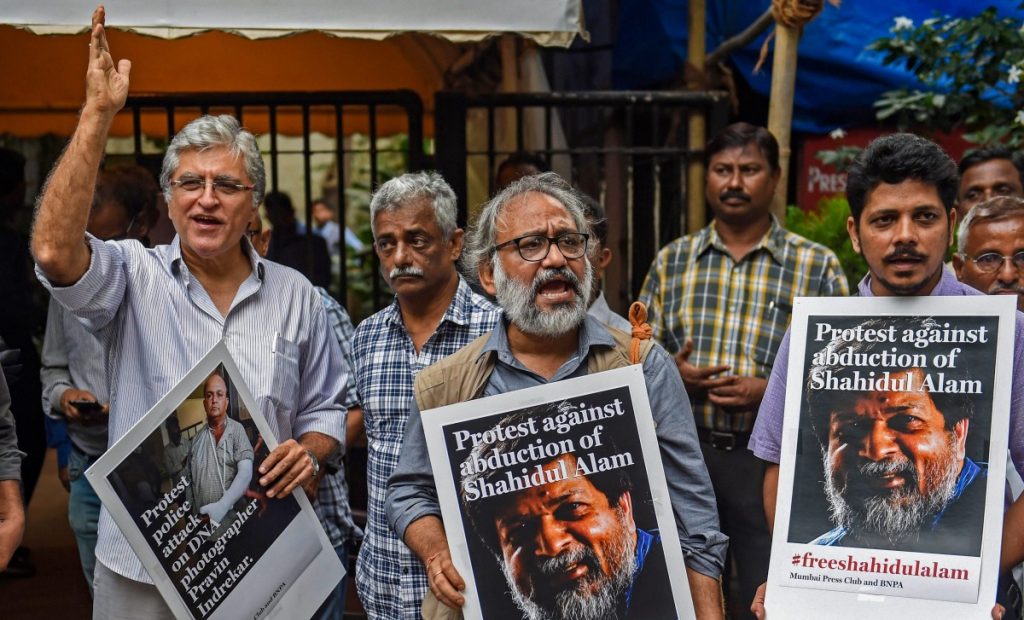 “We condemn, in the strongest possible way, the arrest, brutality and dishonour done to Dr. Shahidul Alam. The message is simple. Dr. Alam exercised his right as a citizen. No charges must be bought under section 57 of the draconian ICT Act,” the statement said.

The International Federation of Journalists and the South Asia Media Solidarity Network have also issued a statement demanding Alam’s immediate and unconditional release, and condemning the attack on journalists covering the demonstrations in Dhaka. “The inability of the authorities in Bangladesh to stop such attacks raises serious concerns about your government’s commitment to democracy, human rights and rule of law,” the statement said.

The statement from Drik is reproduced in full below:

Recipient of Bangladesh’s highest honor Shilpakala Padak Award (2014), globally renowned photographer, academic, and human rights activist, Dr. Shahidul Alam has been taken back to Detective Branch (DB) police custody from Bangabandhu Sheikh Mujibur Rahman Medical University (BSMMU) on August 8.
On August 5th, Shahidul Alam was abducted by force from his apartment by approximately 30-35 unidentified men in white plain clothes. The men came in three cars, and entered the apartment building by force at 10:30 pm. They took away phones from the building security guard, destroyed CCTV camera in the building, and took away CCTV camera hard drives, according to the FIR submitted to police.
On August 6th, Shahidul Alam’s wife, eminent anthropologist Rahnuma Ahmed, filed FIR at Dhanmondi Thana, with the above details. Following a day of national and international outcry over the abduction, and a press conference where his family lawyer Sara Hossain and eminent citizens demanded his immediate return, the Detective Branch of Police stated that they were going to file a case and then, produced him in court in connection with a case filed under Section 57 of the ICT Act for online speech which ‘hurts the image of the nation’.
At the time of his court appeareance, Alam could not walk, was missing sandals, and stated to the court that he had been beaten and tortured in police custody. Witnesses say he showed clear signs of mental and physical abuse.
On August 7th, eminent jurist, Dr Kamal Hossain, with Dr Shahdeen Malik, Sara Hossain, Tanim Hossain Shawon, Jyotirmoy Barua, Aynunnahar Lipi among others, represented him in the High Court. The court ordered ‘immediate medical examination and treatment.’ The order was served by 9 pm on the various police authorities, but medical examination did not happen that night.
On August 8th morning, Shahidul Alam was finally taken to the government hospital Bangabandhu Sheikh Mujib Medical University (BSMMU), and medical examinations were conducted as informed by the Director of the Hospital, Brigadier General Abdullah-Al-Harun. Around 2 pm, Shahidul Alam was returned to the custody of the Detective Branch of Police, instead of being kept at the hospital for further observation and treatment. His lawyer was given no access to him and it was not clear what treatment if any he received. The government hospitals’ health reports are due to the High Court at 10.30 am August 9th.
The Bangladesh Government, through the Attorney General, in the meantime sought to stay the High Court order for examination and treatment of Alam in hospital by moving the higher court (the Appellate Division Chamber Judge). The ADC judge referred the matter to be heard August 9th morning in the Appellate Division. The Attorney General of Bangladesh submitted that ‘Shahidul Alam had criticised the Government’ and referred to the order to place him in remand.