Hundreds of thousands of refugees are living in temporary shelters made of bamboo and tarpaulins at Kutupalong, many on steep hills and in low-lying areas likely to be flooded. 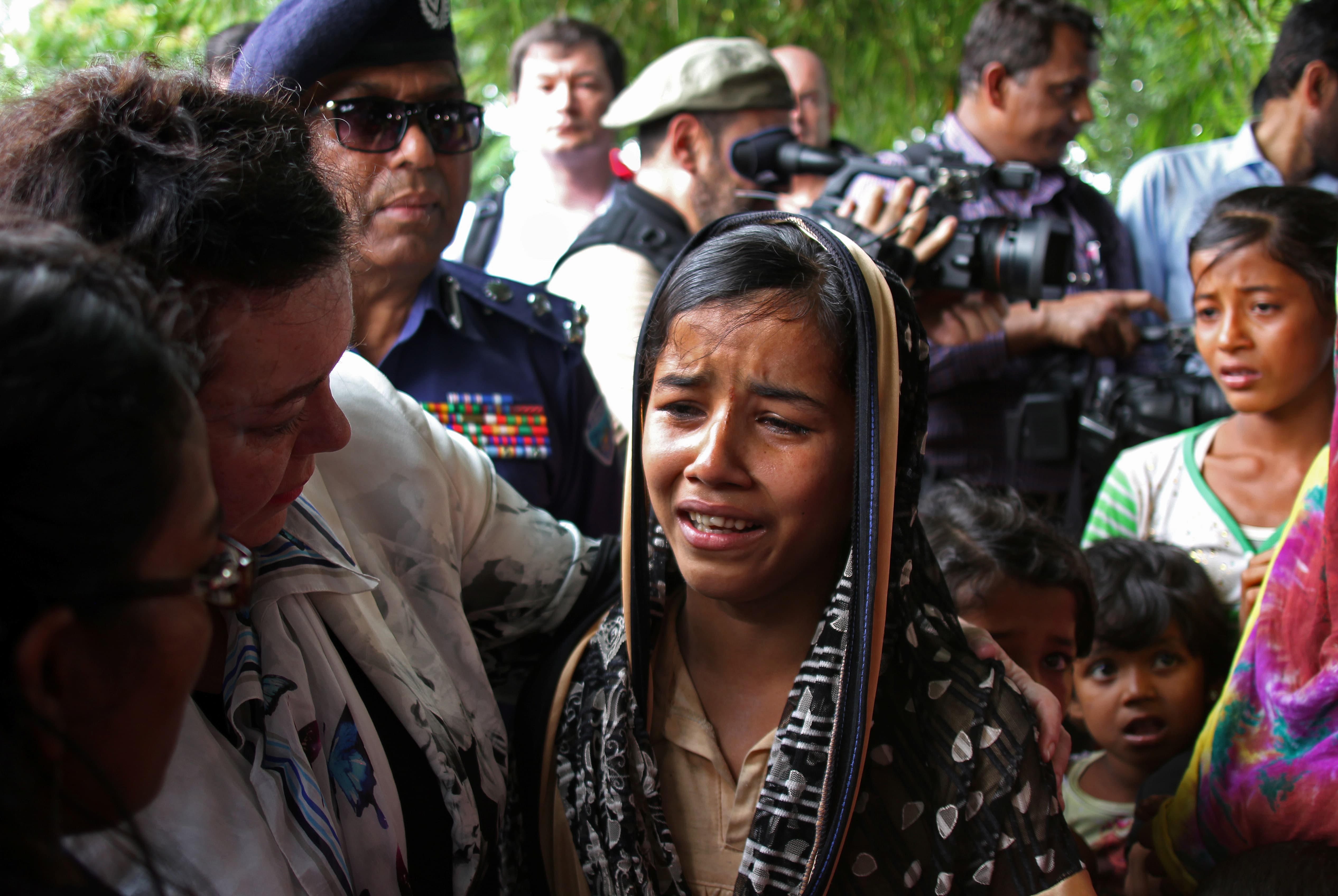 Kutupalong Refugee Camp, Bangladesh: Rohingya refugees in Bangladesh made emotional pleas to the UN Security Council on Sunday for help to return safely to their homes in neighbouring Myanmar and for justice over the reason they fled – accusations of killings, rapes and arson.

During a visit to an unclaimed strip of territory between the two states dubbed no-man’s land, several tearful women and girls threw themselves at British UN Ambassador Karen Pierce as they recounted what had happened to them.

“It shows the scale of the challenge as we try as a Security Council to find some way through that enables these poor people to go home,” Pierce said. “The sad thing is there’s nothing we can do right today that will make their distress any less.”

The Security Council envoys – who will travel to Myanmar on Monday and meet with its de facto leader Aung San Suu Kyi – also visited a dry and dusty Kutupalong refugee camp that housed many of the nearly 700,000 Rohingya who fled Myanmar’s Rakhine state.

“It’s quite overwhelming. Obviously the scale of this camp is unlike anything I’ve ever seen,” said deputy US Ambassador to the United Nations Kelley Currie. “It is going to be a disaster when the rains come.”

United Nations officials and aid groups have voiced concern that the coming monsoon season will worsen the humanitarian situation. Hundreds of thousands of refugees are living in temporary shelters made of bamboo and tarpaulins at Kutupalong, many on steep hills and in low-lying areas likely to be flooded.

The refugee crisis exploded about eight months ago when the Myanmar military launched a crackdown over Rohingya insurgent attacks on security posts. The US, Britain, United Nations and others described the operation as ethnic cleansing of the minority mainly Muslim Rohingya, a charge Myanmar denies.

Hundreds of refugees lined a road in Kutupalong camp on Sunday with signs that read “we demand justice” and “protected return to protected homeland.”

“We are standing here to demand justice as they (Myanmar military) have killed our men and tortured our women so much, so we are compelled to seek justice for those abuses,” Rohingya refugee Sajida Begum told Reuters.

Several female refugees who met with council envoys accused Myanmar troops of gang-raping them, attacking their young children and killing their husbands. Myanmar has said that its operations in Rakhine were a legitimate response to attacks on security forces by Rohingya insurgents.

“This is very complicated issue, and it’s related with history, with ethnicity, with religions,” Chinese deputy UN Ambassador Wu Haitao told reporters, in response to a question about whether China and Russia were preventing the council from considering a resolution on Myanmar.

“There is no easy answer but if we all work together I think we can find a way,” he said.

However, while the Security Council is united on travelling to the region, diplomats said they expect Myanmar ally China and Russia – both veto-wielding powers on the council – to resist any push for stronger council action, such as sanctions or a referral of the situation to the International Criminal Court.

“We don’t have any magic solution in the Security Council,” deputy Russian UN Ambassador Dmitry Polyanskiy told reporters in response to a question about whether the council would consider itself responsible for failing to address the crisis.

“The issue is still for us to promote bilateral ways to resolve this issue. We will try to convince both governments … to engage in constructive negotiations, discussion,” he said.

The council adopted a formal statement in November – a move that requires consensus by the 15-member body – that asked Myanmar to ensure no “further excessive use of military force” and to allow “freedom of movement, equal access to basic services, and equal access to full citizenship for all.”

Buddhist-majority Myanmar has for years denied Rohingya citizenship, freedom of movement and access to many basic services such as healthcare and education. They are considered illegal immigrants from mainly Muslim Bangladesh.