The military-led crackdown in 2017 had forced more than 730,000 Rohingyas to flee to Myanmar, later resulting in the Rohingya crisis. Rohingya refugees take part in a prayer as they gather to mark the second anniversary of the exodus at the Kutupalong camp in Cox’s Bazar, Bangladesh, August 25, 2019. REUTERS/Rafiqur Rahman

Cox’s Bazar: Rohingya Muslims demanded Myanmar be held to account at the United Nations’ top court in The Hague, where Myanmar leader and Nobel peace prize laureate Aung San Suu Kyi is set to defend the country against charges of genocide of the minority community.

More than 730,000 Rohingya fled Myanmar in 2017 after a brutal military-led crackdown the UN has said was executed with “genocidal intent” and included mass killings and rape.

Myanmar vehemently denies allegations of genocide. Myanmar says its military campaign across hundreds of villages in northern Rakhine state was in response to attacks by Rohingya insurgents.

Rohingya Muslims housed in sprawling refugee camps in southern Bangladesh reacted strongly on Monday to the prospect of Suu Kyi appearing this week at The International Court of Justice in hearings set for Dec. 10 to 12. 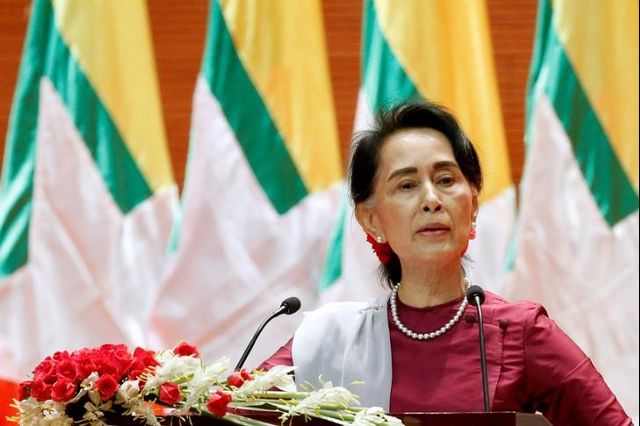 Here are some quotes from individuals:

Mohammed Zobayer, 19, who teaches at a learning center in the camps:

“We witnessed rape, torture and killings. We saw many killed before our eyes. All we could do was run while our homes burned. Now it is time for the global community to act and hold Myanmar accountable for the horrific crimes they committed. They must be held accountable for genocide against the Rohingya.

“Suu Kyi spoke of rape being used by the army as a weapon before she came to power, but she is now the defender of the army. Shame!

“We are eagerly waiting for the hearings … but are not sure if we will be able to hear it at all because of the poor internet connectivity here.”

Nur Alam, 65, whose son was shot dead by the army after the August 2017 crackdown:

“Once Aung San Suu Kyi was an icon of peace and we had huge expectations that things would change when she came to power. We prayed for her, but she has now become an icon of genocide. Instead of protecting us, she has joined hands with the killers. Now she is going to defend the killers. We hate her. Shame on her.

“She and the army and the killers of my son must all be punished. I have longed for this day to come. I’ll have no regrets in life if I see they are punished.”

Rashid Ahmed, 35, who says 12 of his family members were killed by the Myanmar army:

“Only justice can heal our wounds. I know I’ll never get them back, but they will rest in peace when their killers are punished.” Momtaz Begum, 31, holding her three-year-old son in her lap, said in tears:

“The army killed my husband. They raped me and torched my house, they stabbed my six-year-old daughter in the head. I have learned that there will be a trial of Aung San Suu Kyi and the army. We demand the trial of Suu Kyi and the military. Why did they kill our innocent people, our kids? Why did they torture and rape our women? We demand justice.”

Jamalida Begum, 29, who said she was raped by the army in 2016 after her husband was killed:

“The military came to my village and killed my husband and burned my house. Three soldiers dragged me to a bush and pointed a gun at me and raped me until I lost consciousness.

“I fled here after the army put up large posters with my photo and went door-to-door looking for me because I gave interviews to foreign journalists after the brutal incident.

“All I want is justice. I want the punishment of those who raped us, killed our people, torched our houses, threw our children into the fire.