India also hopes that the move will encourage more foreign governments to sponsor projects in the volatile state. 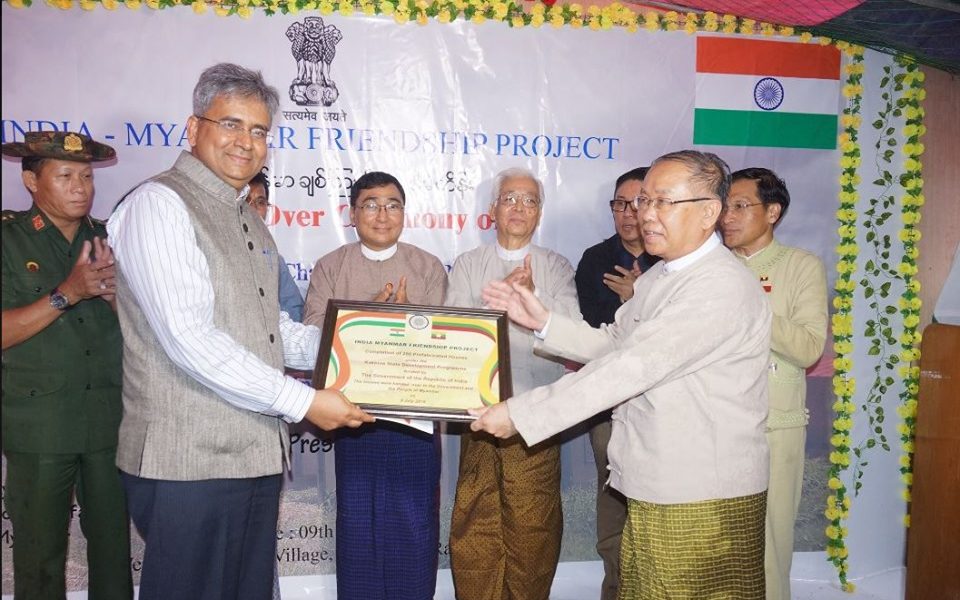 Saurabh Kumar handed over the 250 pre-fabricated houses for use of returnees from Bangladesh to Rakhine State. Photo: Facebook/Ministry of Information, Myanmar

New Delhi: India is hoping that handover of 250 houses for use of returnees would prod Bangladesh and Myanmar to fast-track the repatriation process of Rohingya refugees – and also get more foreign governments to sponsor projects in the volatile Rakhine state.

On Tuesday, Indian ambassador to Myanmar Saurabh Kumar formally handed over 250 pre-fabricated houses to a senior official of the Rakhine state government at a ceremony in Maungdaw. But, it remains to be seen when the houses will be inhabited.

Around 1.2 million Rohingya refugees fled their homes in Myanmar and crossed the border into Bangladesh since August 2017, following a major security crackdown after a terror attack on border forces.

The last attempt to begin the repatriation with an initial batch of 2,200 refugees was stalled in October 2018, when Bangladesh could not find any volunteers due to lingering concerns over retaliation from Myanmar security forces.

Since then, there has been no sign of the repatriation process restarting, with the awning trust deficit between Dhaka and Nyay Pyi Daw keeping both sides in their entrenched positions.

A senior Indian official said that the allocation of houses, which is the first project to be fulfilled under the 2017 agreement for Rakhine State Development Programme, will be managed by the Myanmar government.

The houses, built just outside the vicinity of three destroyed villages, will be allotted to different communities based on a certain formula. While other communities besides Rohingyas may also have lost their houses in the violence, Myanmar authorities may wait till the larger body of displaced locals are able to return.

The security situation within Rakhine is not entirely stable, with fighting breaking out between Myanmar military and Arakan army. Officials, however, said that it did not impact the region where the houses have been constructed.

While security concerns had been cited as the main issue for the repatriation process not starting, Indian officials have repeatedly asserted that socio-economic development will be key to resolving the ethnic tensions in the province of Rakhine.

Recently, Myanmar authorities have identified 21 more projects which will be utilised under the $25 million fund of India’s Rakhine State Development Programme.

Till now, China and Japan have announced major aid projects in Rakhine, but they have not yet been completed. In May, the regional ASEAN grouping also announced that it will take “immediately commence practical measures to alleviate the situation in Rakhine State”.

But, India is hoping that more countries will be encouraged to have substantive aid programmes in Rakhine. “There needs to be projects for clean water, schools and infrastructure,” said the senior Indian official.

During the recent session of the United Nations Human Rights council, India had again stated that the “only sustainable solution to the problems Myanmar is facing in Rakhine State in particular lie in efforts to promote socio-economic development”.

India had also been critical of any efforts to take punitive measures against Myanmar, with officials warning that it would be counter-productive.

This position has sometimes caused heartburn in Dhaka, which consequently leads New Delhi to balance its position. Bangladesh had supported the International Criminal Court’s preliminary investigation into war crimes in Rakhine, but India had opposed it on grounds of not being party to the Rome Statute.

On July 2, India also criticised the Special Rapporteur on Myanmar for her report urging Dhaka to shelve the plan to relocate refugees to an island and recommending that health and educational facilities be opened to Rohingya children.

“We are concerned at the SR’s approach to making recommendations that have an impact on Bangladesh’s society and governance,” said the Indian representative.