The two reporters had pleaded not guilty and told the court that the police had planted documents on them in the course of their work reporting on Myanmar's violence-plagued Rakhine State. 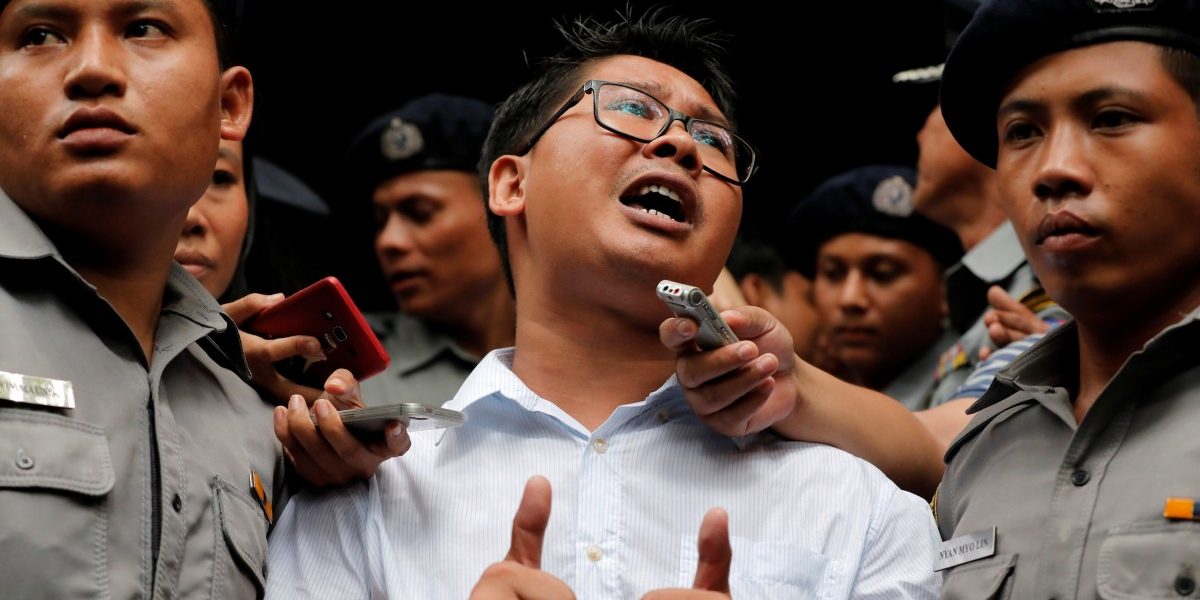 Yangon: A Myanmar judge on Monday found two Reuters journalists guilty of breaching a law on state secrets and jailed them for seven years, in a landmark case seen as a test of progress towards democracy in the Southeast Asian country.

“The defendants have breached Official Secrets Act section 3.1.c, and are sentenced to seven years,” the judge said, adding that the time served since they were detained on Dec. 12 would be taken into account. The defense can appeal the decision to the regional court and then the supreme court.

The two reporters had pleaded not guilty and told the court that the police had planted documents on them in the course of their work reporting on Myanmar’s violence-plagued Rakhine State.

Press freedom advocates, the United Nations, the European Union and countries including the US, Canada and Australia had called for the journalists’ acquittal.

“Today is a sad day for Myanmar, Reuters journalists Wa Lone and Kyaw Soe Oo, and the press everywhere,” Reuters editor in chief Stephen J. Adler said in a statement.

“We will not wait while Wa Lone and Kyaw Soe Oo suffer this injustice and will evaluate how to proceed in the coming days, including whether to seek relief in an international forum.”

The reporters had told the court that two police officials handed them papers at a restaurant in the city of Yangon moments before other officers arrested them.

One police witness testified the restaurant meeting was a set-up to entrap the journalists to block or punish them for their reporting of a mass killing of Rohingya Muslims in Rakhine.

At least 50 people were packed into the small court Monday, with many standing outside. Judge Ye Lwin read out a summary of witness testimony for about an hour before delivering his verdict.

He said it had been found that “confidential documents” found on the two would have been useful “to enemies of the state and terrorist organisations”. Documents in their possession and on their phones were “not public information”. 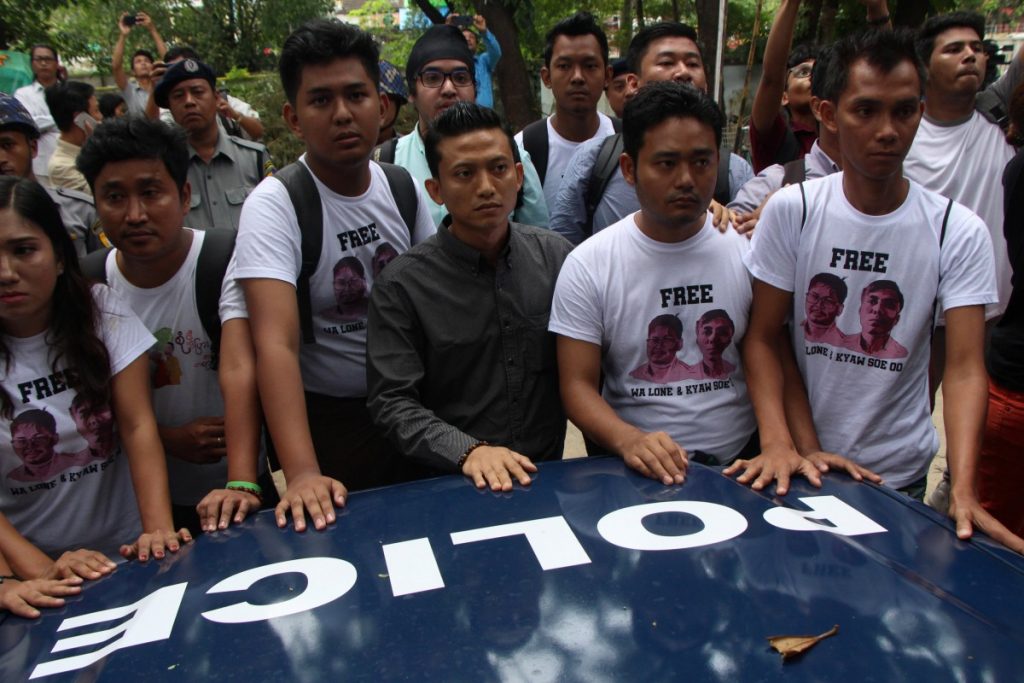 As the judge spoke, several reporters cried as they took notes.

Kyaw Soe Oo’s wife, Chit Su Win, burst into tears after the verdict, and family members had to support her as she left the court.

Wa Lone shook hands with supporters, telling them not to worry. Wearing handcuffs and flanked by police, he addressed a cluster of friends and reporters.

“We know what we did. We know we did nothing wrong. I have no fear. I believe in justice, democracy and freedom,” he said.

Kyaw Soe Oo also said the reporters had committed no crime and that they would maintain their fight for press freedom.

“What I want to say to the government is: you can put us in jail, but do not close the eyes and ears of the people,” he said.

Wa Lone and Kyaw Soe Oo – who both have young daughters and have not seen their families outside of prison visits and court hearings for nearly nine months – were then taken back to prison.

Myanmar government spokesman Zaw Htay didn’t respond to requests for comment about the verdict. He has mostly declined to comment throughout the proceedings, saying the courts were independent and the case would be conducted according to the law.

The verdict comes amid mounting pressure on the government of Nobel laureate Aung San Suu Kyi over a security crackdown sparked by attacks by Rohingya Muslim insurgents on security forces in August 2017.

More than 700,000 stateless Rohingya Muslims have fled across western Myanmar’s border to Bangladesh since then, according to UN agencies. 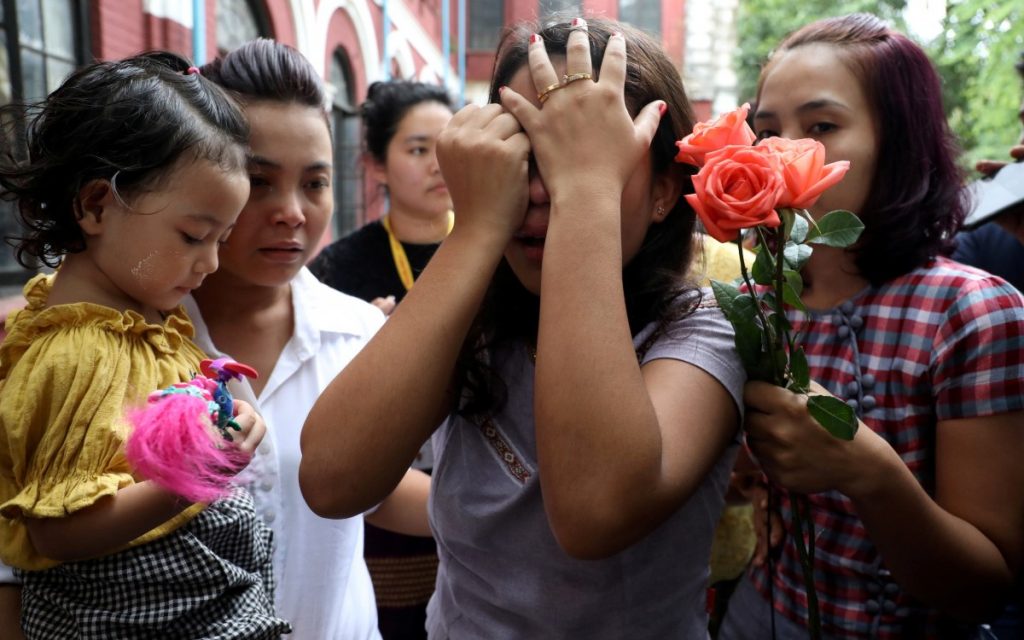 US ambassador Scot Marciel, who attended the hearing, said he was sad for the two reporters and for Myanmar.

“It’s deeply troubling, one has to ask will this process increase or decrease the confidence the people of Myanmar have in their justice system,” Marciel told reporters.

UN Resident and Humanitarian Coordinator in Myanmar Knut Ostby, said he was disappointed.

“The United Nations has consistently called for the release of the Reuters journalists and urged the authorities to respect their right to pursue freedom of expression and information.”

British ambassador Dan Chugg, speaking on behalf of EU members, said the verdict had “dealt a hammer blow for the rule of law”.

The reporters were arrested on December 12 while investigating the killing of ten Rohingya men and boys and other abuses involving soldiers and police in Inn Din, a village in Rakhine State.

Myanmar has denied allegations of atrocities made by refugees against its security forces, saying it conducted a legitimate counterinsurgency operation against Muslim militants.

But the military acknowledged the killing of the ten Rohingya at Inn Din after arresting the Reuters reporters.

A UN mandated fact-finding mission said last week that Myanmar’s military carried out mass killings and gang rapes of Muslim Rohingya with “genocidal intent” and called for top generals to be prosecuted. Myanmar rejected the findings.

The International Criminal Court is considering whether it has jurisdiction over events in Rakhine, while the US, the EU and Canada have imposed sanctions on the Myanmar military and police officers over the crackdown.