In the grand scheme of things in Pakistan, the PTM is a breath of fresh air, yet a drop in the bucket. 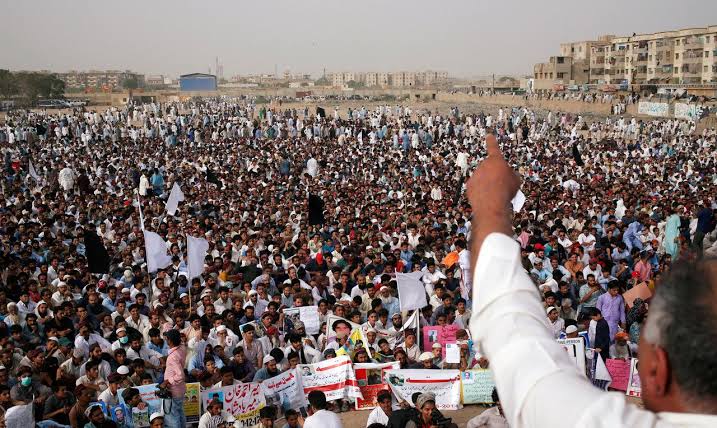 Members of the Pakistan's Pashtun community at a rally organised by the Pashtun Tahaffuz Movement (PTM) in Karachi, May 13, 2018. Photo: Reuters/Akhtar Soomro/FIle Photo

“In February, Arman Luni, a PTM activist from Balochistan, died after being beaten by police officers following his participation in a peaceful protest in the Lorelai district”, records a just-released scathing report by the venerable Amnesty International, on human and civil rights abuses in Pakistan.

This February 2 marks the first anniversary of the PTM – Pashtun Tahaffuz Movement or Pashtun Defense League – stalwart Professor Arman Luni’s killing due to police brutality. Luni was a teacher, poet and political organiser, who along with his sister Wrranga, had joined the PTM ranks to protest the Pashtun lands east of the Durand Line being used by the Pakistani army establishment to harbour and launch its Taliban proxies against Afghanistan and the US and Coalition forces stationed there.

The PTM had been catapulted on to Pakistan’s political stage after its massive protest against another police brutality in January 2018 when Naqibullah Mehsud – a young Pashtun man from the former tribal district of South Waziristan – was killed extrajudicially, by a police officer named Rao Anwar in the provincial metropolis Karachi. The PTM’s immediate demand then was to seek justice for Naqibullah, which still remains elusive.

The movement also sought an end to the army’s impunity in the former Federally Administered Tribal Areas (FATA), demanded that Pashtuns forcibly disappeared by the army in the so-called War Against Terrorism be produced before the courts, landmines removed from the ex-FATA, people displaced internally and externally due to military operation be repatriated to their homes and also be given reparations for destruction of their homes and businesses.

The PTM has, since, gone through the usual ups and downs that most similar movements undergo over the course of their evolution, with most important being the imprisonment of its two parliamentarians Ali Wazir and Mohsin Dawar last year on trumped-up charges of murder, and its charismatic figurehead Manzoor Pashteen earlier in the week. 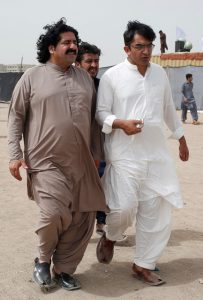 Dawar – a cool-head lawyer – was arrested again last week, while leading a protest against the incarceration of Pashteen but was released the next day. Pashteen has been charged with sedition, conspiracy and a speech allegedly ‘subverting the constitution’.

The irony is that the army dictator General Pervez Musharraf, who has been convicted of high treason an sentenced to death by a special court, remains at large. Regardless, the spontaneous outpouring of support for the PTM leader within and outside Pakistan, and countrywide protests, indicate that the PTM, as well as its message and appeal, are alive and kicking, despite the Pakistan army’s dire warning that the movement’s “time is up”.

The PTM’s time is clearly not up. The tremendous support it generated across Pakistan, especially from the leftist Awami Workers Party (AWP), despite its ethno-national focus on Pashtuns, indicates that the PTM has room to grow and flourish.

That the AWP leaders and cadres came out in droves – and got arrested by the dozens – in support of the PTM, suggests that while the movement champions the Pashtun grievances, its message resonates across the national and class spectrum in Pakistan because of the common tormenter – the army.

The plight of the Okara’s Punjabi farmer, the toiling Baloch of Gwadar, the landless Sindhi peasant or a disappeared Urdu-speaking Shia Mohajir is the same as that of a Pashtun who has been squished under the army’s heavy boot. The ethno-national inequality and the class divide have always overlapped in multinational states like Pakistan and have posed the perennial conundrum for the progressive thinkers and activists, whether the national issue has to be addressed first or is it the class question that needs the immediate attention and remedy.

In Pakistan’s context it is an intertwined phenomenon where the army has acted not merely as the praetorian guard that has anointed itself to define the national interest but virtually as an economic class, as well. And it has done so with the help of collaborators across the ethno-national spectrum. The traditional political parties were forced to play ball with the army or face extinction.

On their part, the traditional or legacy political parties have remained under clan leaderships and derived electoral strength in large part from patronage politics rather than ideological and issued-based agenda. This, in turn, has led the mainstream political parties to remain beholden to the army that controls levers of patronage.

Also read: Why the Government of Pakistan Must Heed the Voices of Young Pashtuns

The two traditional Pashtun nationalist political parties viz. the Awami National Party (ANP) with its historical base in the present-day Khyber-Pakhtunkhwa (KP) province, and to a lesser extent the Pashtunkhwa Milli Awami Party (PMAP) that draws support from the Pashtun areas of the Balochistan province, have effectively remained Islamabad-oriented since at least 1988. They have been stakeholders in the federal and respective provincial governments, which inevitably entails remaining reticent about the army’s Afghanistan project, wherein the Pashtun areas contiguous to the Durand Line have been used as a bridgehead for harboring and launching the Afghan Taliban.

For example, one cannot think of a province-wide – let alone country-wide – protest by either the ANP or the PMAP demanding the Pakistani state and Deep State to stop meddling in Afghanistan. While the stalwarts of both parties have paid lip service to the issue, they have frequently governed their home provinces without ever practically trying to stop the Pakistan army’s intervention onto Afghanistan.

The ANP governed the KP province from 2008-2013 and the PMAP held the gubernatorial slot for Balochistan from 2013-2018. Not that there is anything wrong with coming to power through even a nominally democratic process, the problem was that neither of the signature Pashtun nationalist parties did anything material about the Pakistan army’s policy of using the erstwhile FATA as a sandbag against Afghanistan.

The army, on its part, never abandoned its pursuit of the so-called strategic depth in Afghanistan. For this purpose, the Afghan Taliban have remained the army’s tried and trusted proxies, who had to be homed and harboured in the ex-FATA and the Pashtun regions of Balochistan. This meant that the native Pashtuns of those areas had to suffer a double whammy i.e. face the brutality of the Taliban as well as the army, which went after the so-called Bad Taliban – the ones who disobeyed its command – and cosmetically, to placate international concerns, against the Good Taliban – the ones who have remained under its discipline. These were the circumstances, in which the PTM leaders and cadres came of age and realised that they have to fend for themselves.

Despite strong bonds of kinship and fraternity, the top leaders of the ANP and the PMAP have not visited any prominent population centre of the ex-FATA during almost two decades of war, death and destruction. The PTM rose from the ashes of this war and indignity at the hands of foes and abandonment by the friends. But could it make a difference?

Also read: What’s Next for Pakistan’s Pashtun Movement After a Brutal Army Crackdown

In the grand scheme of things in Pakistan, the PTM is a breath of fresh air, yet a drop in the bucket. On its own, it can draw attention to the plight of the Pashtuns of ex-FATA, present their case nationally and worldwide, and serve as a roadblock of sorts, to the army’s decades-old policy of using the Pashtun regions straddling the Durand Line as a jumping board for its Taliban proxies. But, by itself, it may not be able to put an end to the policy and practice of the Pakistan army to seek hegemony over Afghanistan and to install its puppet regime there.

To this end the PTM will have to convert the mainstream Pashtun nationalist parties to its cause, which is a tall order. But even more difficult is to convince the three-time former prime minister Nawaz Sharif’s Punjab-based Pakistan Muslim League (PMLN) and the later former PM Benazir Bhutto’s Pakistan Peoples Party (PPP) to close ranks with the PTM and convince the army that its project of prosecuting foreign policy through jihadist proxies a la the Taliban, has a tremendously bloody domestic blowback.

Also read: In Pakistan, the Press Remains in Chains While Pashtun Activists March On

While the PMLN supremo, Nawaz Sharif, had tried to confront and rein in the army, his ill health took a major toll on him and his campaign, and sidelined him for the foreseeable future. His party currently is toeing his younger brother Shahbaz Sharif’s line, which effectively is to plod along with the army in the hopes that the latter would ditch its blue-eyed boy Imran Khan and let the PMLN to return back to power. The PPP has almost been confined to Sindh, the home province of its founder Zulfikar Ali Bhutto, and has no inclination to take on the army over any major issue let alone the ex-FATA and Afghanistan, which hardly resonate with its electoral base, if at all.

The Pakistan army under its chief, General Qamar Javed Bajwa, who has a three-year extended tenure under his belt, is unlikely to change its tack vis-à-vis the PTM. It would continue to try to crush the movement by force. With the political parties tamed and the media cowed down into submission, the army has its reasons to believe that it can prevail. History, however, tells another story. Each time the Pakistan army has overplayed its hand and tried to conquer its own people, it has backfired, and it had to beat a military or a political retreat.

The PTM’s cause is just, its means constitutional and the ends democratic and humanistic. The movement and its leaders have a long and arduous journey ahead of them. But then, the life and struggle of the Badshah Khan– the father of non-violent Pashtun nationalist campaign, known as the Frontier Gandhi – tells us that there is no shortcut to a good, old-fashioned political struggle. While attempting to build coalition bridges with the mainstream political parties, the PTM will have to slog on.