Waiting for a Passport: A Pakistani Hindu Family in India Hopes to Return Home

Ajeet Kumar Nagdev wants to return to Balochistan and his extended family. Diplomatic red tape has delayed their 1,700 km journey by more than a month.

When eight-year-old Lovina’s mother Rekha Kumari, 38, died in Nagpur, Maharashtra, due to kidney failure, it was more than a personal tragedy. The death left her Pakistani Hindu family temporarily stranded in India.

Born in India on September 6, 2012, Lovina’s name is endorsed on her mother’s Pakistani passport, which became invalid when Rekha died.

The child, called Gurya (doll) at home, has never been to Pakistan. In 2010, her parents moved from Usta Mohammad in Balochistan, Pakistan to Balaghat in Madhya Pradesh, a little known town in central India, leaving behind a large extended family.

Despite its population of under 10,000, Balaghat has a sizeable community of Pakistani Hindu migrants, including from Usta Mohammad (which has a population of 84,000) at the border of Balochistan and Sindh. Nagpur in Maharashtra state, which is close to Balaghat, has an even larger number of Pakistani Hindu migrants. The childhood home of Dr A.Q. Khan, ‘father’ of Pakistan’s nuclear bomb, Nagpur even has a Quetta Colony.

Finding the grass not always greener on the other side, some migrants decide to return. Since the first lockdown imposed due to the coronavirus pandemic in 2020, until March 17, 2021, 1,288 Pakistani Hindus have gone back, says the Pakistan High Commission in Delhi. Another 107 are on a list compiled on March 22, 2021, waiting to return.

Only rarely are there complications. In one instance, a mother crossing over to Pakistan at the Wagah border found that her baby’s passport had expired, a Pakistan High Commission official tells me. They had to stay back to get the child’s passport updated.

Deciding to go back

Speaking over the phone from his rental in Balaghat, Rekha’s husband Ajeet Kumar Nagdev, 41, tells me the family went to Pakistan only once after the move, for a wedding in 2011.

Since Rehka’s passing, he has been struggling to take care of the children, cook meals, and deal with not only the emotional but the logistical aftermath of his wife’s death. She was a matriculate, more educated than Nagdev, who left school after Class VIII.

We converse in Urdu. Gurya comes to the phone to say hello. She has a slight lisp and says that she’s playing with her dolls. Her brothers, Gurmeet and Ranjet – 15 and 12 respectively – sometimes play with her too.

“All Hindus in Pakistan are Sindhi-speaking”, including all those settled in India, says Nagdev, but the children here largely speak Urdu.

Gurya misses her mother. They all do.

“What can I do? I go into the kitchen to weep, so the children don’t see me cry,” says Nagdev who has just finished cooking dinner – a potato dish, and vadas with yoghurt that the children like.

He began to help out in the kitchen and cook for the family after Rekha’s health began deteriorating, around 2017 or 2018. She developed high blood pressure, shortness of breath and kidney issues. “First one kidney, then the other.”

Finding it increasingly difficult to cope, they decided to return to Usta Mohammad to their large, well-settled business community that has been there for generations. They lived there in a large joint family home with five of Nagdev’s brothers, their families, and the families of the two deceased eldest brothers. Nagdev, the youngest of twelve, has three sisters in Usta Mohammad. Rekha’s four brothers are there too.

In India, their relatives are migrants in nuclear families – Nagdev’s brother and some cousins in Balaghat and Nagpur, and Rekha’s sisters in Pune and Indore.

The pandemic affected Nagdev’s hosiery-selling business at village marts around Balaghat and exacerbated their sense of isolation. 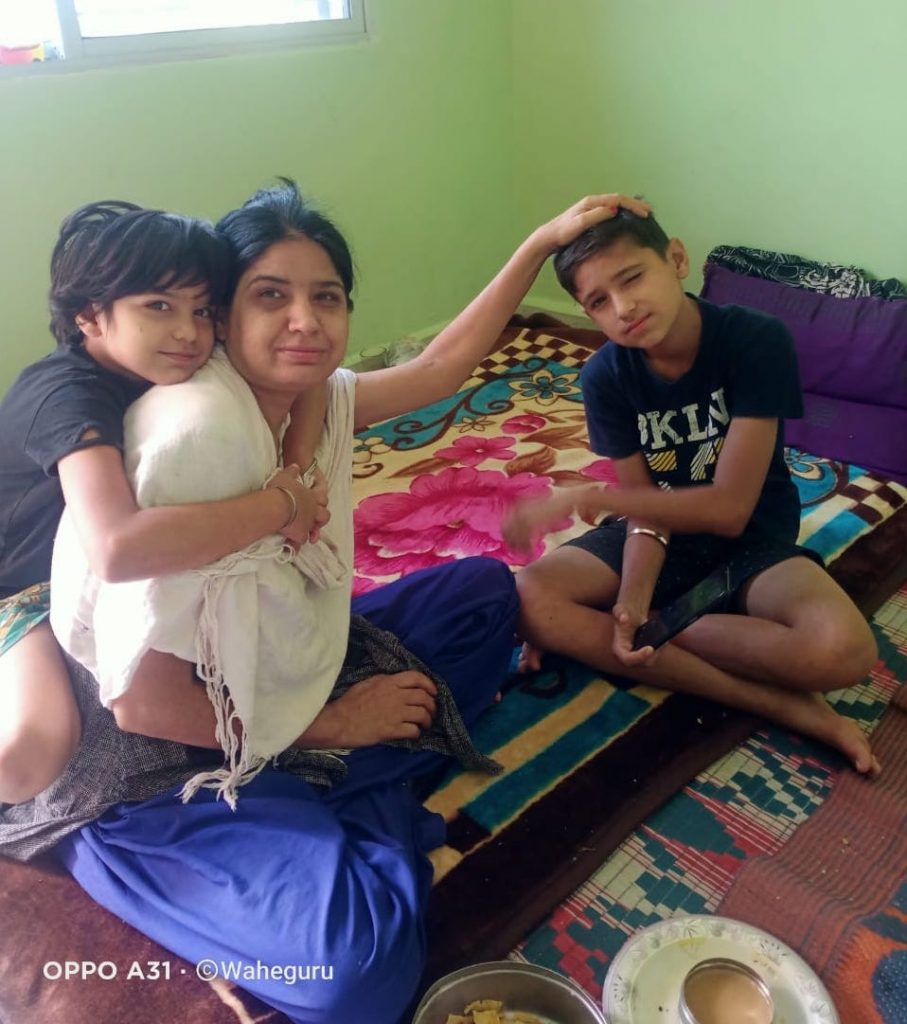 Gurya with her mother Rekha and one of her brothers. Photo: By arrangement

Like other Pakistanis migrating to India on grounds of marriage or religion, the family have long-term visas (LTV). To travel back to Pakistan, LTV holders need a ‘no-objection return to India’ or Nori certificate valid for three months, issued by the Indian government.

Many migrants are wary of talking to the media, fearing repercussions back home  or in their adopted country.

I was alerted to the case via a tweet on May 9, which said, “Please help”. It shared a report by Shishir Arya published in the Times of India.

The tweet was by one Kapeel Kumar, a social activist in Pakistan. He added that the report was about his chachu (uncle).

Nagdev had already completed the paperwork for the family’s move back to Pakistan. Their names were on the list of 136 Pakistanis, mostly Hindu, cleared to return when the border next opened. But the April 17 border-crossing date was changed to April 23, reported Arya.

She became ill on April 10, says Nagdev. The next day, as her condition worsened, he locked up their rented house and sent the children to relatives’ houses – Gurya to a cousin and the boys to his brother’s.

He had to take Rekha to a hospital in Nagpur, and rented a car for the nearly four-hour drive. He stayed at a cousin’s empty apartment there.

After she died, he went to another cousin’s, feeling alone even as community members and relatives gathered to offer him condolences.

“When I got back to Balaghat, I couldn’t bring myself to enter our house,” he says.

He stayed for a few days with his brother, but “how long could we stay there? He has his own family too”.

They couldn’t avail of the April 23 border-crossing date. Neither country would have allowed Lovina to travel without a passport.

The borders have since been closed. Since the pandemic, India and Pakistan sporadically allow each other’s citizens to cross over. The next border-crossing date is expected to be announced within a month.

It took him time to collect all the documentation required to get a passport made for his Gurya. Once he has that, Nagdev can leave “with five days’ notice” he says, desperation in his voice.

Given the raging pandemic and the 1,700 km journey from Balaghat to Delhi, one wonders if the documentation could be done online, which would help others too. The Pakistan High Commission in Delhi, however, cannot process online applications – the Indian government has reportedly blocked the .pk domain.

Since the mission cannot issues machine-readable passports, Lovina will get a handmade passport like her mother’s, valid for travel between India and Pakistan.

The issuance of a new passport requires in-person as well as a Computerized Registration Certificate (CRC), proof of Pakistani citizenship for those who are under 18. Officials also need to ensure that the photo on the passport and the person are the same. The requirement of a CRC had earlier been relaxed, to enable Lovina’s name to be endorsed on her mother’s passport, an official tells me.

“We are cognizant of the tragedy faced by Ajeet Kumar,” he says. The mission is helping him financially by covering travel expenses as well as exempting the urgent passport fees.

On Sunday, May 23, barely a month after his wife’s passing, Nagdev again packed his sons off to his brother’s, and at 12:30 pm set off for the Gondia train station, 48 km away, with Gurya. There were no buses running – they got a ride on a motorcycle.

From Gondia, they caught the 2:45 pm train to Nagpur, reaching at 5 pm. I connected with them while they waited to catch the 8:40 pm train to Delhi. Shishir Arya had come to meet them and kindly brought them some food.

They were to reach Delhi by about 10:30 or 11 am, then make their way to the Pakistan High Commission. Nagdev hoped to get the passport within a few hours, then catch the overnight train back to Balaghat.

To return to Pakistan, he’ll have to make a similar train journey, taking the overnight Chattisgarh Express from Gondia to Amritsar. From there, they’ll cross the Attari-Wagah border on foot, and stay overnight at the Ranjit Singh gurudwara in Lahore.

After that, another overnight train will take him to Sukkur, where someone will drive down from Usta Mohammad to meet them and take them back – another four-hour journey. 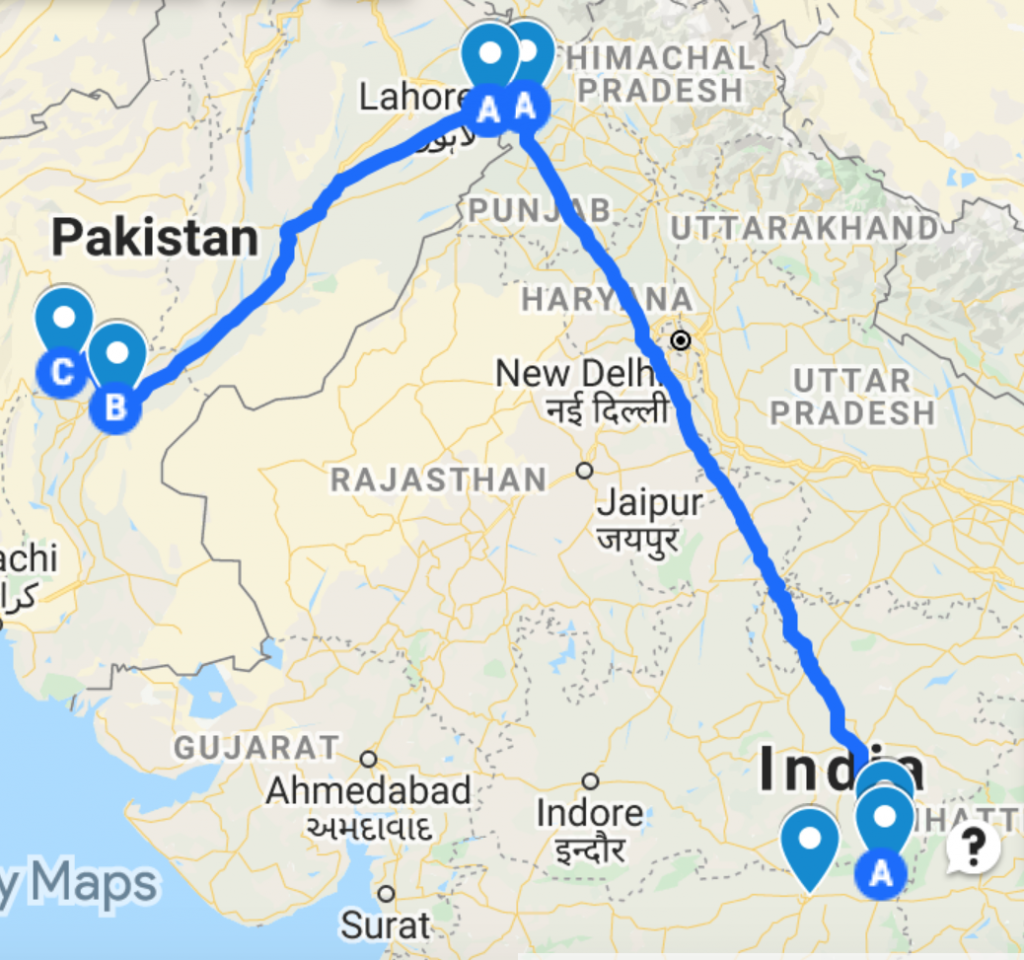 The journey Nagdev and his family will have to make from Balaghat to Gondia, onwards to Amritsa and Lahore, Sukku and finally reaching their home in Usta Mohammad. Photo: Google Maps

The cross-border moves of Pakistani Hindus often get politicised. One lobby projects their migration to India as proof that Pakistan treats its minorities badly. Another projects their return as proof that they are better off in Pakistan. Some organisations in India try to convince migrants to stay back, like the Sindhi Hindi Panchayat, an organisation of Pakistani immigrants in India which is even willing to provide financial help to enable them to stay on.

The BJP spokesperson in Madhya Pradesh, Durgesh Keswani, himself a migrant, also offered to help Nagdev if he agrees to stay back, reports Shishir Arya.

Someone also came to Nagdev to help with his citizenship under the Citizenship Amendment Act, he says. Denounced as discriminatory, the CAA, amended in 2019 to provide a fast track to citizenship for Hindu, Sikh, Christian, Zoroastrian and other (non-Muslim) migrants, sparked widespread protests across India.

Nagdev doesn’t want to avail of any of these offers.

In the end, it seems many of these migrations are not about religion or patriotism but aspirations for a better life. Why can people in the region not live and work in each other’s countries, as and when they want, wonders an Indian journalist, asking not to be quoted. “A doctor in India should be allowed to offer services at a hospital in Pakistan and also the other way round. For that matter, why can’t journalist exchanges be allowed?”

These are policy issues mired in decades of mistrust and tensions, particularly since the 1965 war. Before that, all people needed to cross the border was a permit.

But all Ajeet Kumar Nagdev wants is to return to his joint family in Usta Mohammad where he will feel less alone, and his children will be looked after.

Beena Sarwar is an editor and filmmaker from Pakistan who teaches journalism at Emerson College, Boston. Editor Aman Ki Asha, she blogs at Journeys to Democracy. Twitter @beenasarwar.