The injured people have been shifted to the Jinnah Hospital where the condition of six of them is said to be critical. 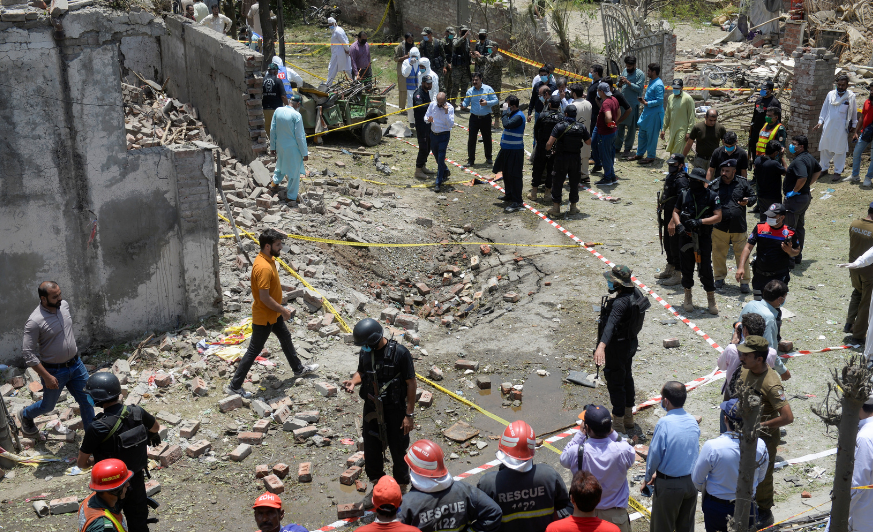 Police officers and rescue workers gather at the site after a blast in a residential area in Lahore, Pakistan June 23, 2021. Photo: Reuters/Mohsin Raza

Lahore: A powerful car bomb went off outside the house of Mumbai terror attack mastermind and banned Jamat-ud-Dawa (JuD) chief Hafiz Saeed here on Wednesday, killing at least four people and injuring over 20 others, police said.

The blast took place at a police picket outside Saeed’s residence at the BOR Society in Jauhar Town.

Inspector General (IG) of Police (Punjab) Inam Ghani said there could have been a “major loss” had there been no police picket outside the house of the high-profile personality, referring to Saeed.

He said three people were killed in the car bomb blast while more than 20 others were injured. Since then, the toll has gone up.

“Explosive material was installed in the car. There was a police picket outside the high-value target’s house. The car could not cross the police picket,” Ghani said, describing it as “a terror” act.

The Counter Terrorism Department (CTD) has taken over the blast site and investigating from all aspects, he said.

“The CTD will determine whether the blast was a suicide blast, if a device was used,” he said.

Ghani also claimed that “hostile” intelligence agencies could be involved in this blast.

The injured people have been shifted to the Jinnah Hospital where the condition of six of them is said to be critical.

“The injured also include policemen. The condition of six injured of the 17 admitted to hospital is critical,” said Dr Yahya Sultan of Jinnah Hospital.

“The nature of the blast is being determined,” he said, adding that the federal agencies are assisting the Punjab government in the investigation.

Punjab chief minister Usman Buzdar instructed that those responsible for the explosion be brought to justice and the best possible medical aid be provided to the injured.

It was a powerful blast that damaged a number of houses, shops and vehicles in the area. A roof of a house caved in because of the impact of the blast, says Rescue 1122.

According to police, a rickshaw and motorcycles parked nearby were completely destroyed by the blast. The sound of the blast was so loud that it was heard faraway.

The blast sparked rumours that Saeed was present in the house.

The 71-year-old radical cleric has been serving a jail sentence at the Kot Lakhpat Jail Lahore for his conviction in terror financing cases.

Saeed, a UN designated terrorist whom the US has placed a USD 10 million bounty on, has been convicted for 36 years imprisonment in five terror financing cases. His punishment is running concurrently.

Saeed-led JuD is the front organisation for the Lashkar-e-Taiba (LeT) which is responsible for carrying out the 2008 Mumbai attack that killed 166 people, including six Americans.

The US Department of the Treasury has designated Saeed as a specially designated global terrorist. He was listed under the UN Security Council Resolution 1267 in December 2008.

The global terror financing watchdog Financial Action Task Force (FATF) is instrumental in pushing Pakistan to take measures against terrorists roaming freely in Pakistan and using its territory to carry out attacks in India.

Note: This article has been updated with an increased toll.