Separatist and terror outfits operating in the restive province of Baluchistan regularly carry out attacks on security installations and security personnel. 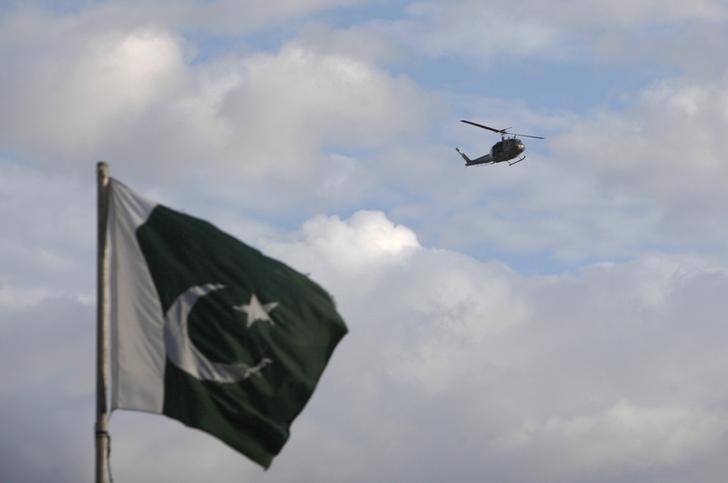 A helicopter flies past Pakistan's national flag in the premises of parliament house during the Revolution March in Islamabad on September 2, 2014. Photo taken September 14, 2014. Credit: Reuters/Akhtar Soomro/Files

The attack was carried out on Thursday on the state-run Oil & Gas Development Company Ltd (OGDCL) workers in Ormara town in Gwadar district.

The Inter-Services Public Relations (ISPR), the media wing of the Pakistan Army, confirmed that the militants had also sustained heavy losses in the exchange of fire and seven Frontier Corps (FC) soldiers and seven private security guards were killed in the attack.

“The terrorists attacked the convoy from the mountains near Ormara on the Balochistan-Hub-Karachi coastal highway and heavy exchange of fire took place. The convoy was returning to Karachi from Gwadar,” a top police official in Gwadar said.

He said it was a planned attack and the militants had prior information about the convoy going to Karachi.

“They were waiting for the convoy. Despite the FC and security guards losing their lives, the other FC personnel managed to safely get the convoy away from the spot near Oramara,” the official said.

Gwadar port is the focal point of the USD 60 billion China-Pakistan Economic Corridor (CPEC) development projects and a number of officials of the state-owned institutions and foreigners work at the port city under heavy security cover.

The ISPR, without giving the exact numbers, said a large number of terrorists had attacked the convoy.

“Security forces responded effectively, ensured security of the OGDCL persons and managed their safe exit from the area,” it said in a statement, adding that “substantial losses were also incurred to the terrorists” during the exchange of fire.

According to the ISPR, the security forces have cordoned off the entire area and a search was underway for the militants involved in the attack.

No banned separatist or terrorist outfit or group has claimed responsibility for the attack.

Prime Minister Imran Khan condemned the attack and sought a report into the incident, the Radio Pakistan said.

The premier expressed grief with the families over the death of personnel of security agencies.

Separatist and terror outfits operating in the restive province of Baluchistan regularly carry out attacks on security installations and security personnel.

On Wednesday, at least 10 people – seven labourers and three children – were injured when suspected militants lobbed a hand grenade at labourers working at an under-construction bridge in the Samungli area on the outskirts of the capital city, Quetta.