Why Pakistan Is Having a Tough Time With its Mosques

The current ‘confrontation’ between the mosques and the government is a product of the state’s encounters with religion. 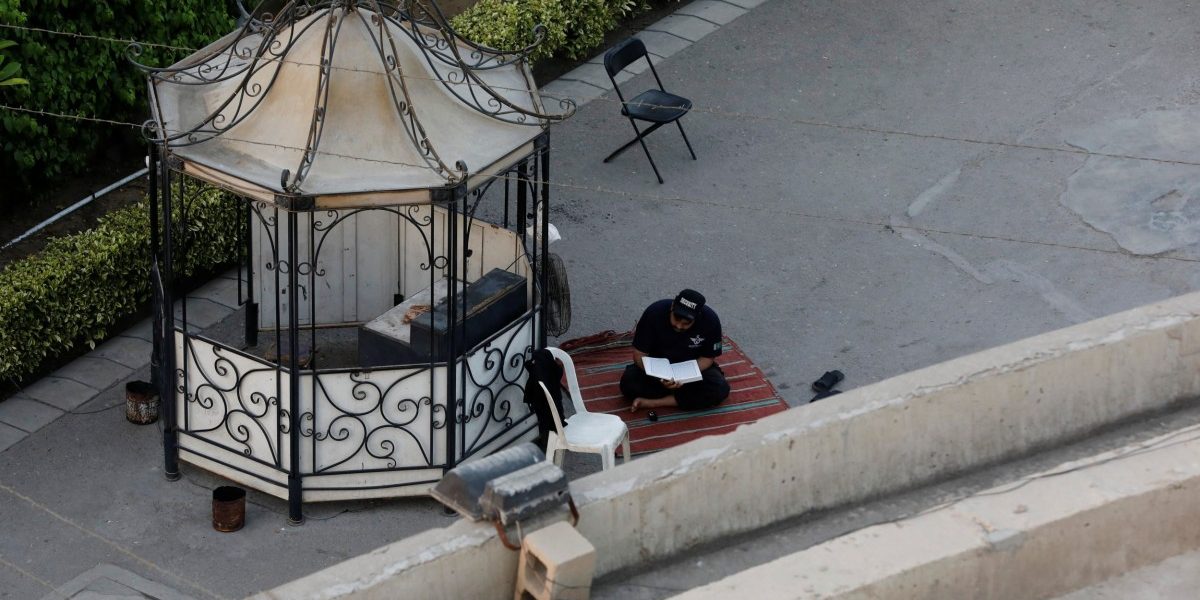 A security guard reads the Koran outside his post before breaking his fast during the Muslim fasting month of Ramadan, amid lockdown in efforts to stem the spread of the coronavirus disease (COVID-19), in Karachi, Pakistan April 26, 2020. Photo: Reuters/Akhtar Soomro

Lahore: With the beginning of Ramzan, as it stands, mosques across Pakistan remain open, with the government issuing a standard operating procedure (SOP) for devotees who want to pray at mosques. These procedures require keeping a certain distance between people. However, given the historical independence of mosques in the country, it seems highly unlikely that the government will be able to enforce this SOP.

For example, different governments have tried standardiding the timing for azaan and prayer, in vain. In the aftermath of 9/11 and the fear of Talibanidation of mosques across the country, there have also been futile efforts to have a standardised, uniform, government-approved khutba, sermon, across the mosques. Even this Ramzan, there are certain areas where Ramzan ‘started’ a day before the rest of the country, following the Arab world, hence Eid would be celebrated a day before the rest of the country, as has been the case for many years. In Islamabad, the controversial Lal Masjid, headed by Maulana Abdul Aziz, sympathetic of the ISIS and a vehement critic of the Pakistani state, remains as independent as always, regularly giving sermons, while hundreds of his supporters gather in the premise of the mosque for prayers, despite government and court orders.

There have already been reports from across the country that various mosques are flouting these SOPs and it is business as usual. The government is regularly repeating the warning that if these SOPs are not being followed then they would have no other option but to shut the mosques. Given how much space the state has already conceded to mosques in the past several decades, there are reasons to believe that this too is a hollow warning, and mosques would remain open, despite whatever the government says.

Instead of exercising its sovereign authority and enforcing a shutdown of the mosques, the government’s strategy has been to have religious scholars on national television to make a plea to the people to not go to the mosques. Similar messages have come from the president and other representatives of the state. The most recent example of this was Maulana Tariq Jamil’s address to the nation, while the prime minister heard in the audience, surrounding by representatives of the media. Tariq Jamil is one of the most famous Islamic preachers in the country, a member of the Tableegh-e-Jamaat.

While the government struggles to shut down mosques, it has had no issues in shutting down Sufi shrines, which historically, within South Asia, were much more important religious centres than mosques. Shia Imaam bargahs and mosques were also effectively shut down, not by a strict government order but rather on the decision of Shia scholars. Similarly, Church leaders too refused to have a large religious congregations on the occasion of Easter, in lieu of the coronavirus.

The argument I am making here is that the insistence of mosques to remain open, despite the dangers, cannot be understood through the framework of ‘religious irrationality’ or religious leaders standing in opposition to the government. In fact, I believe that this ‘confrontation’ between the mosques and the government is rather a product of a long process of the state’s encounter with religion, and the state’s active promotion of a particular religious tradition over the others.

Right from its inception, the Pakistani state has appropriated religion and religious spaces for its own political agenda. In the context of the Sufi shrines, the process began with the formation of Auqaf during the tenure of Ayub Khan, a government organisation that was responsible for looking after the affairs of Sufi shrines across the country. One of the stated goals of Auqaf was to bring practices at Sufi shrines in line with the ‘Islamic teaching’. In this relationship that developed between the Sufi shrines and the state, it was the state that was to have a paternalistic role vis-à-vis the shrine and define for it what is true religion or not.

Also read: Explainer: As COVID-19 Numbers Rise, Why Is Pakistan Reluctant to Call a Lockdown?

With the interference of the Auqaf department in the everyday experience at these Sufi shrines, there was an active policy of standardising religious traditions at Sufi shrines, with the state promoting a particular version of religion which it thought was the correct version. Thus, several religious traditions, which were seen as impure due to their pre-Islamic influences were looked down upon, discouraged and sometimes outlawed at Sufi shrines.

In the process those Sufi shrines which were more mainstream, in bigger cities, and where the state had much more of a presence, slowly became more ‘sanitised’ in line with the state’s understanding of ‘normative religion’. The biggest example of this is the shrine of Data Darbar in Lahore, where overtime all of these ‘non-normative’ traditions have been outlawed to promote a certain version of what a Sufi shrine should look like. Data Darbar today stands in contrast to the shrine of Lal Shahbaz Qalandar in Sehwan Sharif, Sindh, or Shah Hussain’s shrine in Lahore, where some of these idiosyncratic traditions survive, despite the presence of the Auqaf department.

As a guiding principle I have found that shrines that are away from important urban centres have, to a certain extent, retained some of their idiosyncratic tradition, but that is constantly changing as different areas of the country being incorporated into to the larger, economic and political systems.

This most recent example of the state promptly shutting down Sufi shrines, while expressing an uncertainty about mosques is yet another case of the state defining what normative religion in Pakistan is. For all the ‘soft image’ appropriation of Sufi shrines, in this world view, the religiosity they represent lies on the margins of what actual religion is. It is no surprise therefore that there was no trouble for the state to shut it down, while the same cannot be done for the mosques, for they represent normative religion.

It is therefore not a straightforward case of some religious groups exerting their independence but rather a complicated process through which legitimacy is rendered to certain religious traditions and spaces by the state and not to others.