Following the 'rejection' of the no-confidence motion and the dissolution of assemblies, the chief justice of Pakistan had reached the Supreme Court and taken suo motu cognisance of the events.

Pakistani lawmakers of the united opposition walk towards the parliament house building to cast their vote on a motion of no-confidence to oust Prime Minister Imran Khan, in Islamabad, Pakistan April 3, 2022. Photo: Reuters/Akhtar Soomro

New Delhi: After a no-confidence motion against Prime Minister Imran Khan was “rejected” by the National Assembly (NA) deputy speaker and President Arif Alvi dissolved the NA, the Pakistan Supreme Court said that all orders passed by the Prime Minister and the President will be subject to the top court’s order.

A three-judge bench of Chief Justice of Pakistan Umar Ata Bandial and Justices Ijazul Ahsan and Mohammad Ali Mazhar, hearing the case, issued notices to all the respondents, including President Alvi and deputy speaker of the NA, according to Pakistani newspaper Dawn. The court also directed the Attorney General Pakistan (AGP) to determine the constitutional validity of the deputy speaker’s ruling.

The hearing has been adjourned to Monday, April 4.

On Sunday morning, NA deputy speaker Qasim Khan Suri had dismissed the opposition’s no-confidence motion as being violative of the constitution. Thereafter, Khan had, in a televised address to the nation, said that he “advised” the President to dissolve assemblies.

On Sunday afternoon, CJP Bandial had reached the Supreme Court and taken suo motu cognisance of the events. The deputy attorney-general has resigned in response to Sunday’s events.

In the wake the deputy speaker and the President’s rulings, CJP Bandial observed that public order should be maintained and that no state institution should take “extra-constitutional” steps in the current situation.

The parliament was supposed to vote on the no-trust motion tabled by the joint opposition of the Pakistan Democratic Movement and Pakistan People’s Party. They had been confident of getting past the simple majority mark of 172 in the National Assembly.

Deputy speaker Suri said that the no-confidence motion was unconstitutional, as it was against Article 5 of the constitution. The speaker was not present in the house, and the opposition was not given a chance to speak.

Article 5 states that “Loyalty to the State is the basic duty of every citizen”. The second part of the article asserts that “Obedience to the Constitution and law is the [inviolable] obligation of every citizen wherever he may be and of every other person for the time being within Pakistan”.

Taking the floor shortly after the session began, information minister Fawad Chaudhry reiterated the premier’s earlier claims that a foreign conspiracy was behind the move to oust the government.

“On March 7, our official ambassador was invited to a meeting attended by the representatives of other countries. The meeting was informed that a motion against PM Imran was being presented,” he said, according to Dawn.

After Chaudhry spoke, Suri said that the points that the minister had raised are “valid”. “No foreign power shall be allowed to topple an elected government through a conspiracy,” the deputy speaker said.

After the deputy speaker made the ruling, television screens in Pakistan were filled with scenes of lawmakers protesting and moving towards the well of the chamber.

Within seconds, Khan appeared live on television “congratulating the Pakistani nation” for the no-trust motion being dismissed.

The President of Pakistan, Dr Arif Alvi, has approved the advice of the Prime Minister of Pakistan to dissolve the National Assembly under the Article 58 (1) read with Article 48(1) of the Constitution of the Islamic Republic of Pakistan.

Following the ruling by the deputy speaker, the chamber of the National Assembly witnessed chaos, with opposition members refusing to leave the house.

Later in the day, a member of the opposition, Ayaz Sadiq, was put in the speaker’s chair and he reportedly conducted proceedings. The microphones of the house were not switched on, so nothing could be heard, but TV reporters stated that the text of the original no-trust motion was put to vote by the opposition’s member in the speaker’s chair. Sadiq is a former speaker of the National Assembly.

This was also confirmed by the PPP leader Bilawal Bhutto Zardari in his live phone call with Geo News. He said that PMLN’s Ayaz Sadiq was already part of the panel of speaker. “Since the speaker and deputy speaker were not in the house, another member from the panel can also conduct the house. He put our motion to vote and it got 195 votes. That number should be noted.” 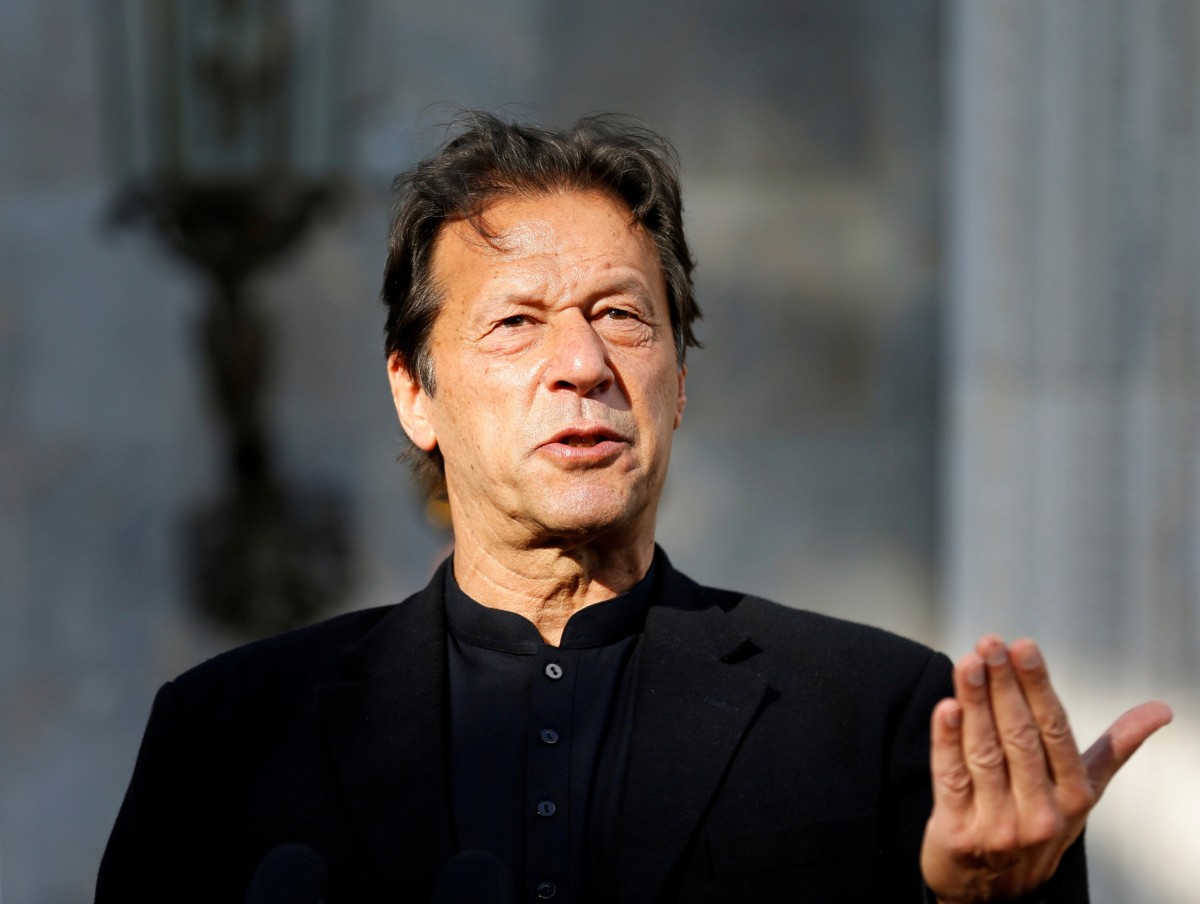 PML-N leader Shahbaz Sharif told Geo News that Article 6 of the constitution, which relates to high treason, would apply to Khan and the National Assembly speaker.

Opposition leaders have also said in the local media that they will approach the Supreme Court to intervene and are committed to continuing their protests within the parliamentary chamber.

PPP leader Bilawal Bhutto Zardari told the media that the opposition will be sitting on dharna in the National Assembly to ensure that there was voting on Sunday. “Our lawyers are also getting ready to go to Supreme Court… The Supreme Court has to decide that the vote will take place today. This juvenile move has exposed Imran Khan.”

After Sunday’s events, Director General of the Inter-Services Public Relations (DG ISPR) Major General Babar Iftikhar claimed that the army had nothing to do what had happened. “Absolutely not,” he responded, when asked if the army had been involved.

Minister of state for information and broadcasting Farrukh Habib said on Twitter that new elections will be held in 90 days.

Several legal and constitutional experts in Pakistan have said the dismissal of the no-trust motion goes against the laws of the land.

Political drama in Pakistan was also witnessed in the Punjab assembly on Sunday, which was supposed to elect a new leader. According to Dawn, the session was adjourned without the vote after ruckus by both the opposition and government lawmakers. PML-Q’s PTI-backed Chaudhry Parvez Elahi and PML-N’s Hamza Shehbaz were expected to go head to head in the race to become the next chief minister.