Where has that money gone? And what is the intent of the Imran Khan government in managing the economic and social effects of the novel coronavirus? 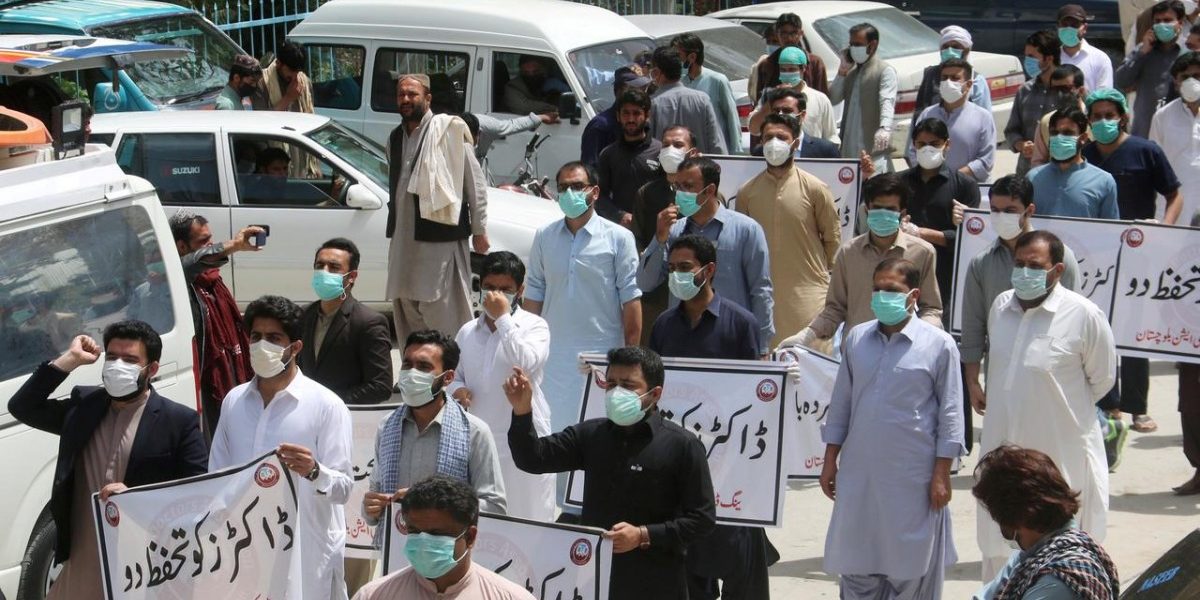 The spike in novel coronavirus cases that Pakistan saw in the run-up to Eid-al-Fitr, when people left their homes to shop for the festival, has levelled and the country seems to have dodged the worst of the COVID-19 pandemic for now.

But though the curve may have flattened, the way millions of dollars of aid, which was meant to manage the COVID-19 challenge in Pakistan, appears to have disappeared raises questions on the intent of Imran Khan’s government.

On May 9, 2020, after a ‘lockdown versus livelihoods’ calculation, the Pakistan government decided to lift the lockdown. This decision coincided with a marked acceleration in the number of COVID-19 cases. As of August 5, the country has 281,136 confirmed cases and 6,014 fatalities.

According to the estimates of several international lending agencies, Pakistan has faced an economic loss of up to PKR 2.5 trillion in the current fiscal year because of the COVID-19 pandemic. A study by the Pakistan Institute of Development Economics shows that poverty in the country may double from 23% to 57% as a result of the coronavirus-induced economic slowdown.

To mitigate the negative effects of this medical crisis on the economy, Pakistan has sought debt relief of slightly over $2 billion (PKR 335 billion) from its G20 creditors. Among the G20 countries, China is its largest bilateral creditor with $9 billion in outstanding liabilities against Pakistan, followed by Japan with $5 billion.

By early April 2020, when there were just about 2,000 COVID-19 positive cases in Pakistan, the World Bank’s (WB) board of executive directors approved a $200 million package to help Pakistan. Further, to support Pakistan’s public health response to the novel coronavirus and allow it to meet the basic needs of the vulnerable and poor segments of society, the Asian Development Bank (ADB) approved a $300 million emergency assistance loan to Pakistan, $200 million of which was meant explicitly for unconditional cash transfers to members of vulnerable sections of society, with the rest for health emergencies.

In March 2020, the ADB had approved $2.5 million in grants to help Pakistan purchase personal protective equipment (PPE) and other medical supplies. In April, the International Monetary Fund (IMF) had approved the disbursement of $1.386 billion as financial assistance to Pakistan so it could to meet its urgent balance of payment needs stemming from the COVID-19 outbreak. The Islamic Development Bank (IDB) also provided a $650 million financial package to support Pakistan in its efforts against the coronavirus pandemic.

All these grants were provided to the Pakistani government to assist in effective and timely action in response to the spread of the coronavirus. The purpose was to bolster Pakistan’s national healthcare and to mitigate socioeconomic disruptions that came to the forefront due to the pandemic. The WB aid was meant for a focused support towards emergency response in the health and social sectors and the IMF loan was to boost Pakistan’s foreign exchange reserves. The US too has contributed nearly $27 million to its health partnership with Pakistan. It donated 100 state-of-the-art ventilators to be distributed across various hospitals in Pakistan earlier this month. No equipment, no tests

Despite these huge grants and substantial endowments, Pakistan’s response to the coronavirus pandemic has been inadequate. Notwithstanding the launch of a ‘National Action Plan for the Corona Virus Disease (COVID-19)’, a lack of basic healthcare facilities and inconsistent implementation of government policies resulted in the rapid and incessant spread of COVID-19 throughout the country. Hospitals lack crucial protective suits and other supplies.

There have been reports of discrimination against minorities in terms of access to relief items or even access to healthcare. Some 46% of Pakistanis do not have access to water and soap at home. Frontline healthcare workers do not have basic personal protective equipment. Hospitals are short of rudimentary equipment like gloves, sanitisers, overalls, ventilators, and even ancillary staff. In Quetta, Balochistan, doctors and medical staff treating coronavirus patients who protested over the non-provision of PPE kits were arrested by the police.

The Human Rights Commission of Pakistan (HRCP) in its study titled ‘Pakistan’s Response to COVID-19′ has declared that the government’s management of the pandemic has been thoroughly unsatisfactory, particularly combined with an alarming decrease in testing. A call attention notice submitted in the national assembly by legislators of the Pakistan People’s Party asserted that contrary to the World Health Organisation’s recommendations for 20 million tests, only 1.6 million have been conducted throughout Pakistan.

The analytical study by the Human Rights Commission of Pakistan states that “the government’s overall response has been marred by inconsistent messaging at the top.” The study concluded that besides eroding the public’s trust in governing institutions, the pandemic has worsened prevailing structural discriminations and exposed misplaced socio-economic priorities in Pakistan. The study states that only a fraction of healthcare workers (3%) have been affected in Pakistan relative to approximately 13% in other countries. This indicates a failure on the part of the Pakistani government to provide adequate PPE kits, leading to care-givers avoiding patients.

The massive loans to ease the economic blow of the COVID-19 pandemic have also not reflected in the state of the economy which, at the close of the fiscal year on June 30, 2020, recorded a negative growth of -0.4% against the estimated fixed target of positive 3.3%.

Pakistan’s current federal budget doesn’t take COVID-19 conditions into account. It stated that PKR 70 billion was allocated for the COVID-19 response, but specifications of how this amount was going to be spent were not provided.

It is interesting to note that while the Pakistani establishment has been pleading for endowments and loan freezes from the international community by citing the impact of the COVID-19 on its fragile economy, it has been downplaying the seriousness of the virus for its domestic audience.

Prime Minister Imran Khan made contradictory statements, sometimes defusing and at other times aggravating panic, and then dithering over whether to implement a lockdown or not. Even as Khan’s government accepted the many financial grants from aid agencies to fight the pandemic, it was in his very presence that Tablighi cleric Maulana Tariq Jameel, asserted that COVID-19 is the result of the “wrongdoing of women.” 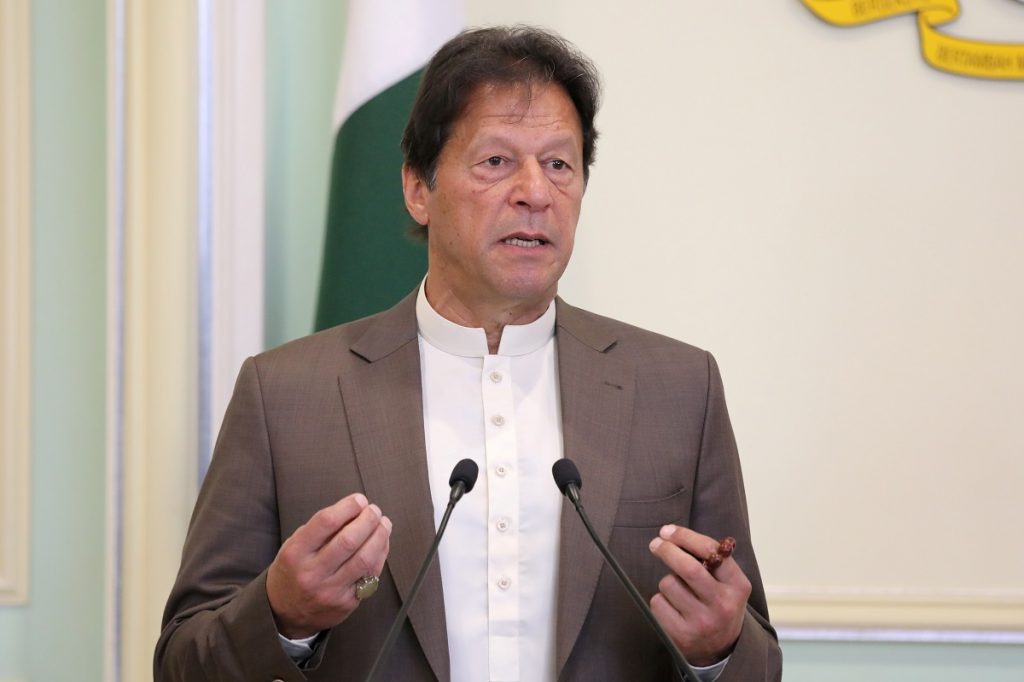 Institutionally, the disorientation of the government was evident as it first declared that the National Disaster Management Authority (NDMA), a civilian organisation headed by a serving lieutenant general, would ‘be the lead operational agency’ in the campaign against the virus. But later the National Command and Operation Centre (NCOC) was put in place, without parliamentary or cabinet approval, to ‘synergise and articulate [a] unified national effort against COVID-19.”

Khan’s government modified the decade-old Benazir Income Support Programme (BISP) as ‘Ehsaas Emergency Cash Programme’ and announced financial aid to those who had suffered the loss of livelihood due to the lockdown. In the absence of any reliable data on families that had been affected financially by COVID-19, the government distributed relief money only to those registered under the BISP. The United Nations Development Programme has pointed out that because the government’s administrative and political structures lacked direct contact with the people at the local level, Pakistan has not been able to take decisive action against the pandemic.

One year ago, Pakistan entered an extended fund facility arrangement with the IMF, but the effects of the pandemic on this already-contracting economy have been devastating. Even in these testing times, Imran Khan’s messaging appears confused, despite his constant reiteration that it isn’t. His insistence on ‘a smart lockdown’ has only created uncertainty, without alleviating the problems of the poor. In parliament in the budget session, he said, “The country had two paths going forward: there are enough facilities to cope with the virus if people take precautions, but if people show carelessness, the disease will continue to wreak havoc.” Go figure.

Despite receiving millions in aid due to the COVID-19 pandemic, Pakistan is neither testing enough nor is it preparing to ramp up testing in case of a new outbreak. With plummeting testing, and unrestricted Eid-ul-Adha celebrations, there is likely to be a surge of cases. Evidence suggests that Pakistan’s pandemic response is unlikely to stand up to the challenge.