Supporters of jailed ex-premier Nawaz Sharif said there were problems with the vote count and the process was an assault on democracy in a country that has a history of military rule. 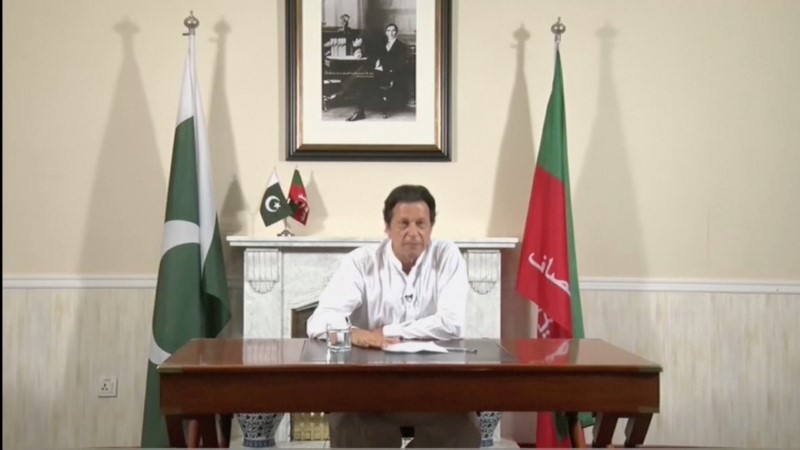 Cricket star-turned-politician Imran Khan, chairman of Pakistan Tehreek-e-Insaf (PTI), gives a speech as he declares victory in the general election in Islamabad, Pakistan, in this still image from a July 26, 2018 handout video by PTI. PTI handout/via Reuters TV

“This will be the first government that will not carry out any political victimisation,” Khan said in a speech on Thursday.

Supporters of jailed ex-premier Nawaz Sharif said there were problems with the vote count and the process was an assault on democracy in a country that has a history of military rule.

The stock market shot up nearly 2% in early trading on relief the likely coalition government will not be a weak one. Pakistan faces a mounting economic crisis that is likely to require a bailout by the International Monetary Fund, although PTI has not ruled out seeking succour from China, Islamabad’s closest ally.

Election Commission of Pakistan (ECP) secretary Babar Yaqoob said told reporters early on Thursday counting had been delayed by technical failures in an electronic reporting system and the tallying was now being conducted manually. The results had been due by 2 am (2100 GMT). 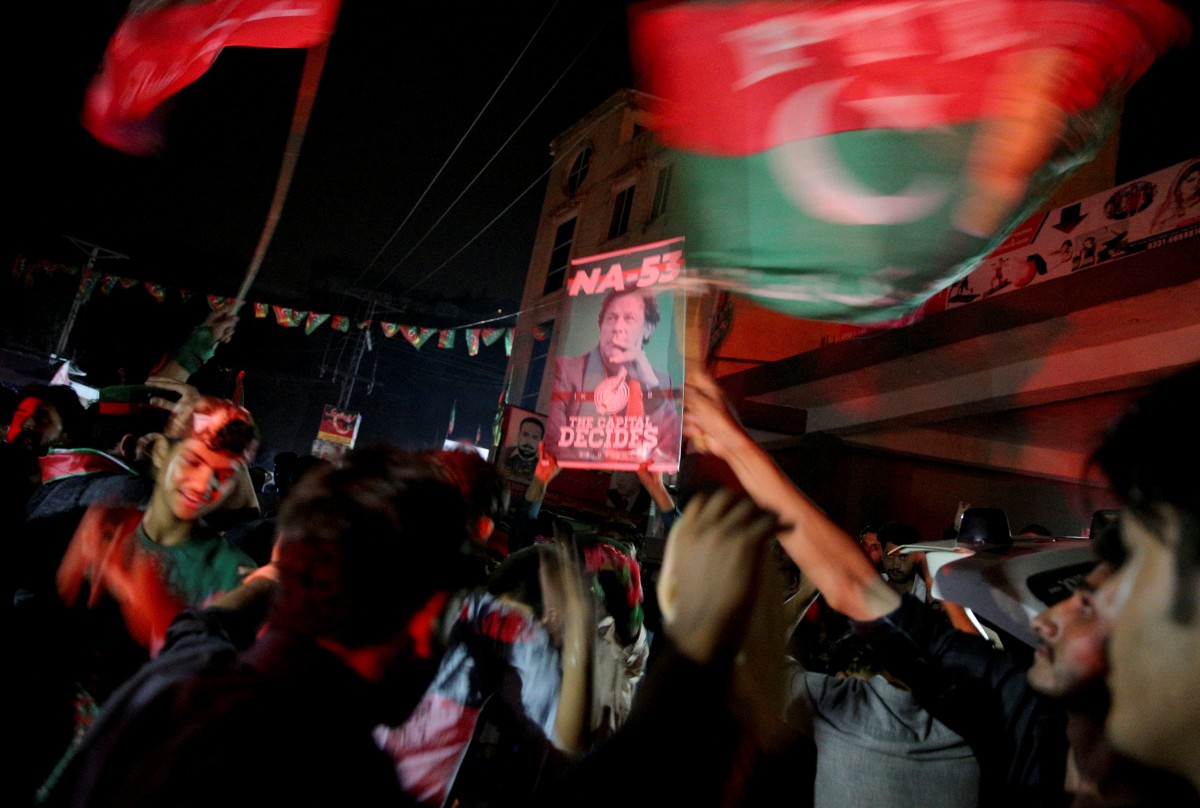 Supporters of Imran Khan, chairman of the Pakistan Tehreek-e-Insaf political party, celebrate near his residence in Bani Gala during the general election, in Islamabad, Pakistan July 25, 2018. Credit: Reuters/Athit Perawongmetha

“There’s no conspiracy, nor any pressure in delay of the results. The delay is being caused because the result transmission system has collapsed,” Yaqoob said.

Chief Election Commissioner Sardar Mohammad Raza also defended the process, saying “elections were 100 percent transparent and fair”, but could not set an exact deadline when the full results would be released.

With 48% of the total vote counted, Khan’s PTI was listed by the ECP in its provisional results as leading in 113 of 272 contested National Assembly constituencies.

Sharif’s Pakistan Muslim League-Nawaz (PML-N) was ahead in 64 constituencies, and the Pakistan Peoples Party (PPP), led by the son of assassinated two-time prime minister Benazir Bhutto, led in 42 constituencies.

Khan’s party spokesman, Fawad Chaudhry, tweeted “Congratulations to the nation on a new Pakistan! Prime Minister Imran Khan”, although his party has officially held off on declaring victory.

Although Khan still appeared likely to fall short of the 137 seats needed for a majority in the National Assembly, he should not have problems finding coalition partners from smaller parties and independents. 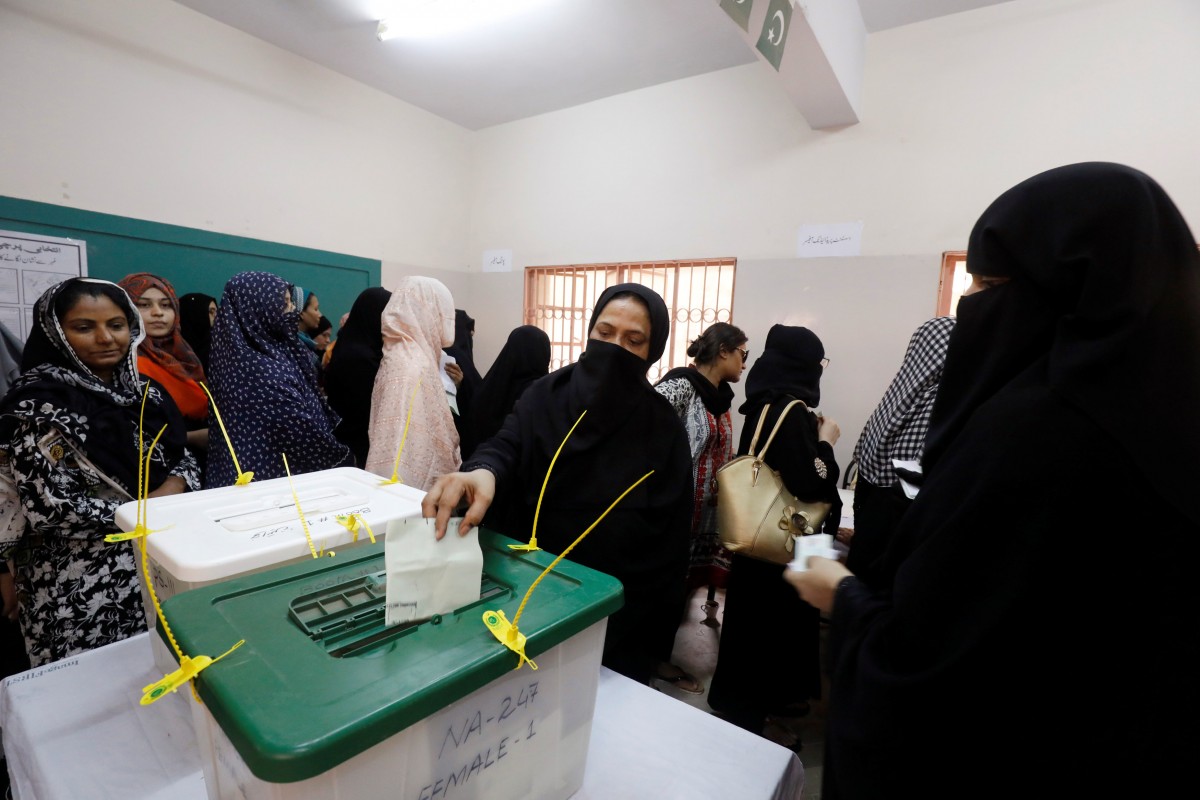 A woman casts her ballot while other wait for their turn at a polling station during the general election in Karachi, Pakistan, July 25, 2018. Credit: Reuters/Akhtar Soomro

Khan’s party spokesman, Fawad Chaudhry, tweeted “Congratulations to the nation on a new Pakistan! Prime Minister Imran Khan”, although his party has officially held off on declaring victory.

Pakistan‘s benchmark 100-share index surged as much as 1.9% to 42,136 points in early trading. Analysts said investors were relieved Khan is now unlikely to have to rely on major opposition parties in a messy coalition.

“Now they can go ahead with smaller allies and make necessary reforms without much opposition,” said Saad Hashemy, local brokerage Topline Securities’ director of research.

Wednesday’s voting was marred by a suicide bombing that killed 31 people near a polling station in Quetta, capital of the southwestern province of Baluchistan. Islamic State claimed responsibility.

This election will mark only the second civilian transfer of power in Pakistan’s 71-year history.

But campaigning has been plagued for months by allegations the powerful armed forces have been trying to tilt the race in Khan’s favour after falling out with the outgoing ruling party of Sharif, who was jailed on corruption charges this month.

The PML-N, which came to power in a landslide 2013 vote, has sought to cast this election as a referendum on democracy, saying it was campaigning to protect the “sanctity of the vote”, a reference to a history of political interference by the military.

Early on Thursday, Sharif’s brother Shehbaz, who now leads the PML-N, rejected the results after complaints that soldiers stationed in polling stations had thrown out poll monitors from political parties during the counting.

About 371,000 soldiers have been stationed at polling stations across the country, nearly five times the number deployed at the last election in 2013.

The PML-N and the PPP both said their monitors in many voting centres had not received the official notifications of the precinct’s results, but instead got hand-written tallies that they could not verify.

“It is a sheer rigging. The way the people’s mandate has blatantly been insulted, it is intolerable,” Shehbaz told a news conference as the counting continued.

“We totally reject this result,” he said. “It is a big shock to Pakistan’s democratic process.” 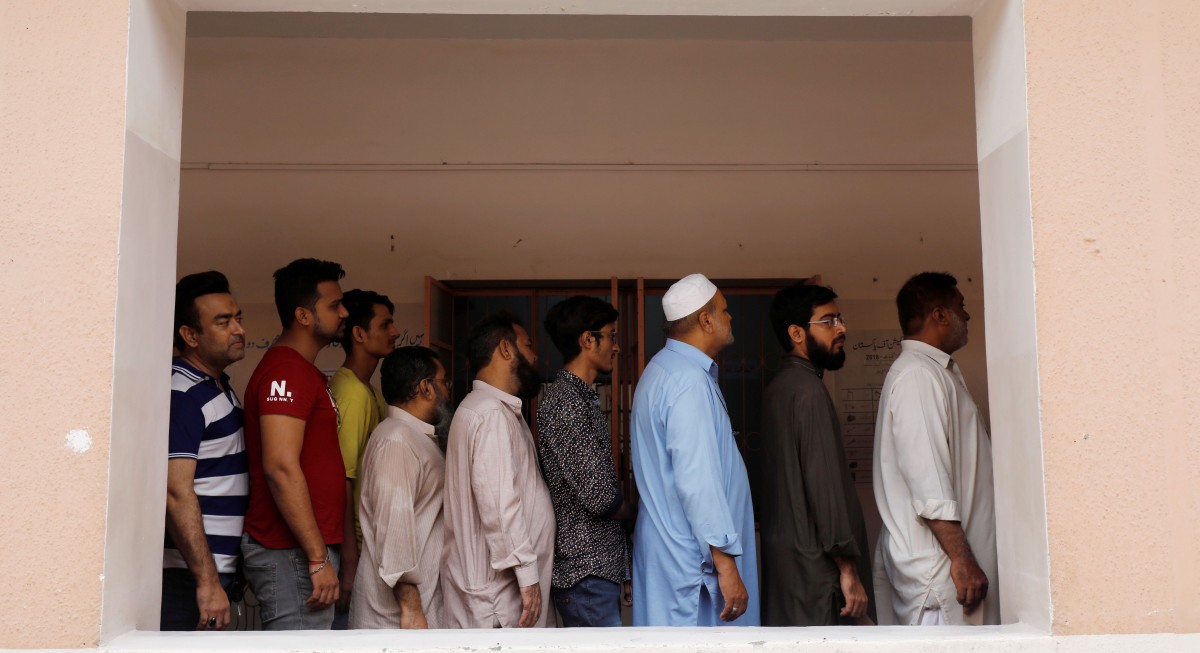 People wait in line to cast their vote at a polling station during the general election in Karachi, Pakistan, July 25, 2018. Credit: Reuters/Akhtar Soomro

The PPP also complained that its polling agents were asked to leave during the vote count in a number of voting centres.

“This is the warning bell of a serious threat,” said PPP senator Sherry Rehman. “This whole election could be null and void, and we don’t want this.”

Khan has staunchly denied allegations by PML-N that he is getting help from the military, which has ruled Pakistan for about half of its history and still sets key security and foreign policy in the nuclear-armed nation. The army has also dismissed allegations of meddling in the election.

Khan has promised an “Islamic welfare state” and cast his populist campaign as a battle to topple a predatory political elite hindering development in the impoverished mostly-Muslim nation of 208 million, where the illiteracy rate hovers above 40 percent.

If Khan’s lead holds, his party will likely be able to form a government with smaller parties and independents, avoiding the prospect of weeks of haggling.

Such a delay could further imperil Pakistan’s economy, with a looming currency crisis expected to force the new government to turn to the IMF for Pakistan’s second bailout since 2013. PTI has not ruled out seeking succour from China, Islamabad’s closest ally.