A total of 41 cases have been registered by Pakistan's Counter Terrorism Department against the JuD leaders, out of which 24 have been decided while the rest are pending in the ATC courts. 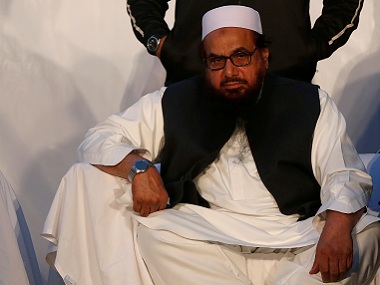 The Anti-Terrorism Court (ATC) of Lahore on Friday handed down 6 and 5 1/2 years of imprisonment to JuD leaders Muhammad Ashraf and Lucman Shah, respectively. ATC Judge, Arshad Hussain Bhutta, also imposed a fine of Rs 10,000 on each of them.

Saeed, a UN designated terrorist whom the US has placed a USD 10 million bounty on, was arrested on July 17 last year in the terror financing cases. He was sentenced to 11 years in jail by an anti-terrorism court in February of this year regarding two terror financing cases. The JuD chief is lodged at Lahore’s high-security Kot Lakhpat jail.

Saeed is wanted in India for planning the 2008 Mumbai attacks when 10 Pakistani terrorists killed 166 people, including six Americans, and injured hundreds others.

Paris-based global terror financing watchdog, the Financial Action Task Force (FATF), is instrumental in pushing Pakistan to take measures against terrorists roaming freely in Pakistan and using its territory to carry out attacks in India.

The sentencing of JuD leaders comes weeks after the FATF retained Pakistan on its grey list till February 2021 as Islamabad failed to fulfil the agency’s six key obligations, including the failure to take action against two of India’s most wanted terrorists – Saeed and Maulana Masood Azhar.

Saeed-led JuD is the front organisation for the Lashkar-e-Toiba (LeT), which is responsible for carrying out the 2008 Mumbai attack.

The US Department of the Treasury has designated Saeed as a Specially Designated Global Terrorist. He was listed under the UN Security Council Resolution 1267 in December 2008.

The FATF had placed Pakistan on the grey list in June 2018 and asked Islamabad to implement a plan of action to curb money laundering and terror financing by the end of 2019. The deadline was later extended due to the COVID-19 pandemic.

With Pakistan still in the ‘grey list’, the country may find it difficult to get financial aid from the International Monetary Fund (IMF), World Bank, the Asian Development Bank (ADB) as well as the European Union, thus further enhancing problems for the cash-strapped nation.