Two Arrested in Pakistan For Suggesting That Army Seize Power

Pakistan has been ruled by the military for almost half its history and repeatedly swung between democracy and military rule. 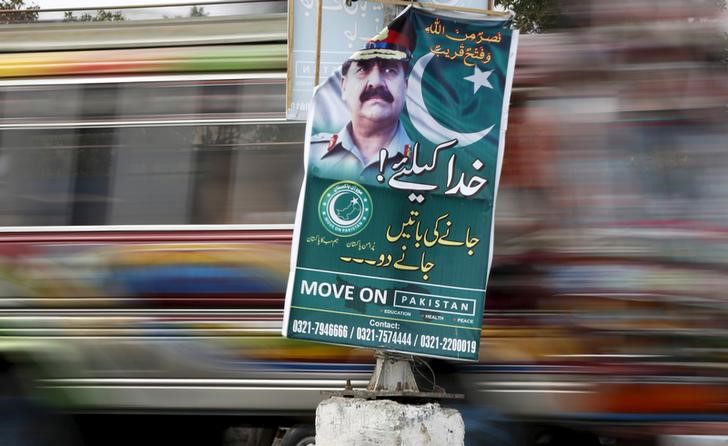 A bus moves past a banner hanging on a light pole with the picture of Pakistan's Army Chief of Staff General Raheel Sharif along a road in Karachi, Pakistan February 25, 2016. Reuters/Files

Karachi: Pakistani authorities have arrested two men in different parts of the country for suggesting that the army seize power from the civilian government of Prime Minister Nawaz Sharif, police said on Tuesday.

Pakistan, a nuclear-armed nation of 190 million, has been ruled by the military for almost half its history and has repeatedly swung between democracy and military rule.

Sharif was toppled in a coup in 1999 and returned to power after winning a 2013 election, but his relations with the powerful military have been testy at times and both sides are sensitive about talk of military intervention.

The arrests came after posters appeared in 13 cities seeming to invite army chief General Raheel Sharif, who is due to retire in November, to step in and rule the country.

A military spokesman disavowed the posters. Raheel Sharif, who is no relation to the prime minister, has said that he would step down as planned.

Police arrested one of the men, Muhammad Islam Khan, in the northwestern town of Bannu on Monday after he staged a poll on a street, asking people whether they were satisfied with the government or wanted the army to step in.

“We cannot allow such a sensitive exercise where you put politicians on one side and the army on the other when there is an elected political government and independent judiciary present in the country,” the police chief said.

Last week, another man, Muhammad Kamran, the head of a little known party called Move on Pakistan, was arrested in the capital, Islamabad, after putting up posters suggesting the army chief seize power, a police spokeswoman said.

The spokeswoman said Kamran was being questioned.

Sharif has faced criticism over recent months, since documents released as part of the Panama Papers data leak showed that his children owned several off-shore companies and used them to buy properties in London.

He denies any wrongdoing, as do his children.

The criticism and occasional strains in his relations with the army have raised questions about prospects for his government.

Pakistan‘s next general election is due in 2018.