Sharif is currently in jail after an anti-corruption court sentenced him on December 24 to seven years in jail in the Al-Azizia Steel Mills graft case while acquitting him in the Flagship Investments corruption case. 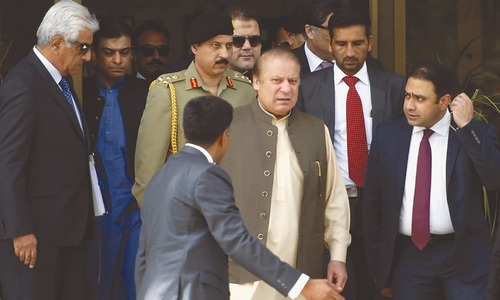 Islamabad: In a relief to jailed former Pakistan prime minister Nawaz Sharif, the Supreme Court on Monday dismissed the anti-graft body’s appeal against the suspension of his jail sentence and that of his family in one of three corruption cases faced by the embattled leader.

In July 2018, an accountability court handed Sharif 10 years as jail time for owning assets beyond known income and 1 year for not cooperating with the National Accountability Bureau (NAB).

The apex court, in its ruling, said that the NAB has failed to provide the “ground for cancellation of bail” and that the IHC had not exceeded its authority in granting bail to the convicts of the Avenfield case.

The 69-year-old three-time former prime minister and his family have denied any wrongdoing.

Sharif is currently in jail after an anti-corruption court sentenced him on December 24 to seven years in jail in the Al-Azizia Steel Mills graft case while acquitting him in the Flagship Investments corruption case in the Panama Papers scandal.

The Supreme Court’s decision brings a rare relief for the Sharif family, both of whose leaders Nawaz Sharif and Shahbaz Sharif are currently incarcerated, Dawn newspaper commented.

The NAB, Pakistan’s anti-corruption body, approached the apex court after the Islamabad High Court, on September 19, suspended prison sentences of the Sharifs awarded by an accountability court.

The accountability court convicted Maryam and Safdar in the Avenfield properties case and sentenced them to eight years and one year, respectively, in prison.

Upholding the lower court’s decision, the Supreme Court bench threw out the NAB’s request to revoke the Sharifs’ bails, observing that the anti-corruption watchdog had failed to provide the “grounds for cancellation of bail”.

Also Read: The Corruption Case That Undid the Sharif Family

The IHC did not exceed its authority in granting bail to the convicts of the Avenfield case, Geo TV quoted the bench as observing.

Justice Asif Saeed Khosa, who will be sworn in as the country’s next chief justice later this month, stated that the IHC decision was temporary and the apex court would not interfere with the decision.

“The person [Nawaz Sharif] is in prison and there is no allegation about the misuse of bail. We have a Constitution to follow and we will make sure justice prevails. There will be a fair trial in every case,” Justice Khosa remarked.

Responding to the apex court verdict, Maryam Nawaz, daughter of Sharif, said she was thankful to Allah Almighty.

She, however, said that true relief and happiness would be when her father came back home from jail.

The former premier has been a serving seven-year imprisonment at Kot Lakhpat prison after being declared guilty of corruption in Al-Azizia case.

Sharif has already filed an appeal in the Islamabad high court against the sentence.

“I am thankful to Allah Almighty for today’s decision. The fact is that not for a moment was I concerned about myself. Insha’Allah true relief & happiness would be when my father comes back home. I have faith in Allah and His infinite Mercy. Thank you all for your prayers & support,” Maryam tweeted.

Reacting to the top court’s decision, Information Minister Fawad Chaudhry took to Twitter and hailed the decision saying Sharif is still is in prison and hence the decision will not have any effect on the present state of the Pakistan Muslim League-Nawaz (PML-N) leader.

Three cases of corruption the Avenfield properties case, Flagship Investment case and Al-Azizia steel mills case – were launched by the NAB on September 8, 2017 following a judgment by the apex court that disqualified Sharif.

The apex court initially set six month deadline to conclude the cases but it was subsequently increase around eight times on the request of the accountability court.

Sharif was disqualified by the Supreme Court in the Panama Papers case in July, 2017.