As Nepal's Political Crisis Deepens, All Eyes Are on the Supreme Court

Two factions of the ruling party are holding conflicting street protests, in a bid to influence the apex court and Election Commission. 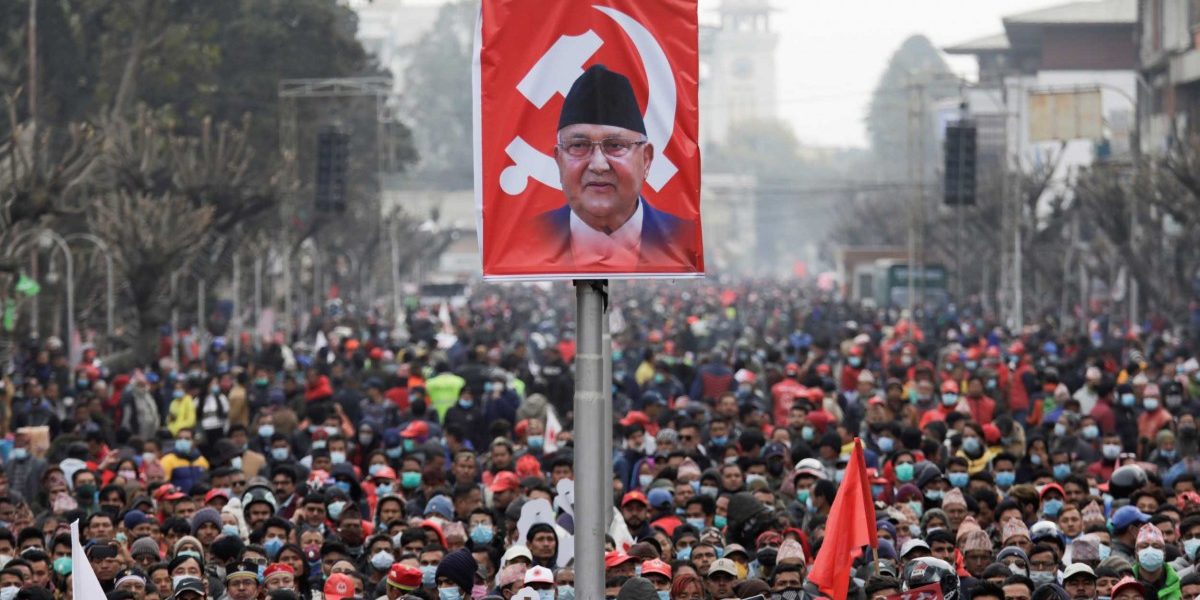 Pro-government activists gather near the portrait of Nepal's Prime Minister Khadga Prasad Sharma Oli, also known as K.P. Oli, during a mass gathering in his support, after the dissolution of parliament, in Kathmandu, Nepal February 5, 2021. Photo: Reuters/Navesh Chitrakar

With prolonged hearings in the Supreme Court on a writ petition filed against Prime Minister K.P. Sharma Oli’s move to dissolve the House of Representatives, tensions among state organs are increasing and parties are competing to amass people in the street to influence the judiciary and other constitutional bodies in their favour.

Oli’s move to dissolve parliament led to the split of the ruling Nepal Communist Party, formed after the unification of two communist forces CPN-UML and CPN (Maoist Centre) in 2018. Politically, the NCP is already divided but the Election Commission (EC) is yet to take legal decisions concerning the split. Ironically, one faction of the party is in government and another is participating in street protests.

Since the dissolution of Parliament, both factions, one which is leading the government and another which is in the streets, are holding large-scale mass protests in a bid to influence the Supreme Court proceeding and the EC.

Similarly, opposition parties Nepali Congress and Janata Samajbadi party are organising street protests against the Parliament dissolution. The NC, however, is of the view that there should not be attempts to influence court proceedings and everyone should abide by what the Supreme Court decides.

At the same time, an additional political crisis is unfolding. Speaker of the House of Representatives Agni Sapkota is in a confrontation with Oli and the President’s Office. Objecting to the decision made by Constitutional Council regarding appointments to constitutional bodies, Sapkota has filed a case in the Supreme Court. This clearly indicates a possible confrontation between key state actors. Such cases are rare in the modern political history of Nepal.

The ruling faction is making efforts to show that people are in favour of parliament dissolution, so they want initiate a fresh election. Another faction is showing strength by claiming that people are against the House dissolution. By amassing people in the streets of Kathmandu from surrounding districts, both factions aim to show the court that the people support their agenda and expect a court verdict in their favour.

The Supreme Court will deliver the verdict on Parliament dissolution, while the Election Commission will determine which faction is the official NCP. While protesting in the streets and delivering speeches, both sides have crossed the line; that is why Oli and other top leaders of the NCP have faced contempt of court cases.

Senior leaders are all set to appear before the court. At the same time, there are concerns that the Supreme Court is using the contempt of court tool to suppress the freedom of speech and expression, a fundamental right guaranteed by the constitution and other international legal instruments.

Sooner or later, both the Supreme Court and Election Commission will deliver their verdicts. There are 50-50 chances of the court validating the prime minister’s move to dissolve the House or rejecting Oli’s move.

Whatever the court decides, one thing is clear: Nepal is in for another round of political instability. If the Supreme Court restores Parliament, there will be a coalition government as a single party does not control a majority of the seats in the House of Representatives.

More than that, there are high-chances of parties engaging in horse-trading. Governments could be formed and toppled in the days ahead.

Several examples show that parties are yet to realise their past mistakes and correct their working styles. If the court validates prime minister’s decision to hold elections, there are chances of a deep crisis ahead.

Oli has proposed holding elections in two phases on April 30 and May 10. But given the time pressure and fragile political situation, elections are unlikely within the stipulated period. Additionally, the Election Commission is yet to take a decision concerning which faction is the official NCP.

Similarly, other political parties are unlikely to accept Oli’s leadership in deciding to hold elections, but in the absence of Parliament, there are constitutional difficulties in forming a new government.

The election will not happen in May but sooner or later, there will be no option for parties but to contest elections. There is no guarantee, though, that a new election will bring political stability in Nepal. A protester affiliated with a faction of the ruling Nepal Communist Party shouts towards a bus driver defying a general strike against the appointment of dozens of officials to constitutional bodies, saying due process of law was not fulfilled, in Kathmandu, Nepal February 4, 2021. Photo: Reuters/Navesh Chitrakar

In the divided political landscape and mixed electoral system, it is very difficult for any single party to get the majority seats required for forming government.

In the case of the Nepal Communist Party, in 2018, it was possible to gain almost two-third of the votes in Parliament due to the unification of two parties. Otherwise, the electoral mandate was for a coalition government. This unification was driven by the personal ambitions and dreams of two leaders – Oli and Pushpa Kamal Dahal – even though there were ideological, cultural and political differences between the two parties. These differences led to a split in the party three years later.

Still, the unification of the two parties and the formation of a strong government in 2018 heralded an era of political stability in Nepal, sprouting the hope of economic prosperity in Nepal.

Nepal entered a period of chronic political instability soon after democracy was restored in 1990. After 1990, not a single government completed its five-year tenure. In the last three decades, 26 governments have been formed in Nepal.

The long and painful political transition continued till 2015, when Nepal drafted a new democratic, republican and federal constitution. The election process under the new constitution was completed in 2018. When Oli was sworn in as the new prime minister in 2018, there was a hope that the government would last for five years and there would be an appropriate environment for common people to conduct their business.

However, there were no high expectations from those parties and leadership, because they had been tested in the past and proved ineffective in delivery. But there were slim hopes that there would not be conflict, continuous protests in the streets, strikes and disturbances, so that common people could work as normal. Similarly, there was a hope of job creation.

Similarly, the prime minister cannot dissolve Parliament in case there are chances of the formation of a new government from Parliament. The prime minister has to go through certain steps before announcing snap elections. The drafters of the constitution said the new provisions meant Nepal adopted a reformed Parliament system, which is different from that adopted after 1990. However, Oli dissolved Parliament with the logic that in a parliamentary system, the prime minister’s office has an inherent right to declare mid-term election.

Another argument made by Oli is that when he dissolved Parliament, he commanded majority support in the House so that there was no chances of forming a new government from the same Parliament.

So, this time Supreme Court is not only going to deliver a verdict on whether to hold elections or restore Parliament, it is going to define what type of parliament system that new constitution has envisaged.

As stated earlier, nothing is certain but one thing is sure: Nepal is going to face another round of political stability. The political instability will affect the country’s development and economic aspirations. Additionally, if the political crisis further deepens, the progressive constitution adopted in 2015 will be in peril.

Despite some reservations, all political parties express allegiance to the 2015 constitution. So the biggest challenge for Nepal is to come out of the current political crisis and save the constitution. This is the only route that can create hope for political stability in Nepal.

Kamal Dev Bhattarai is a Kathmandu-based journalist and writer. He writes on political and diplomatic affairs.