The map follows the construction of a road from India up to the Chinese border in Uttarakhand and the suggestion by the Indian army chief that Nepal was protesting 'at the behest' of China. 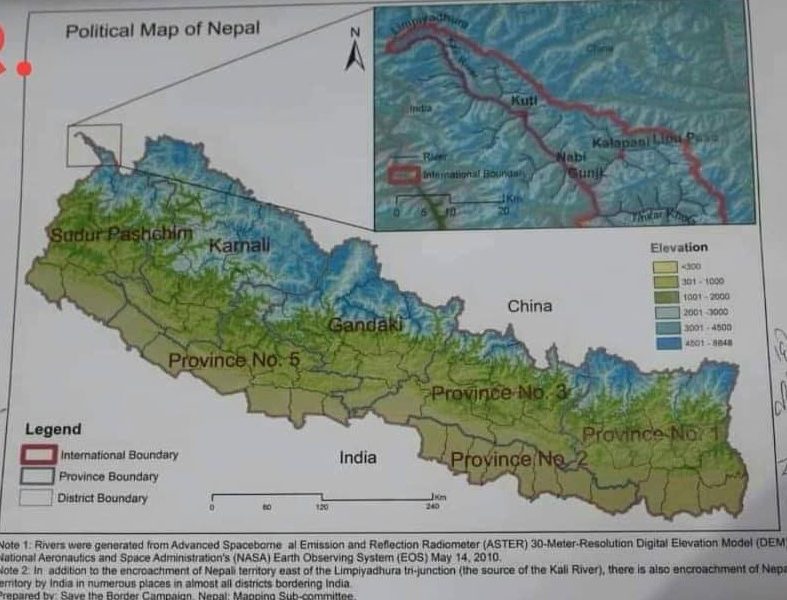 Map of Nepal released by civi society organisations in 2019, with the region of Lipulekh, which India says is its territory, shown as part of Nepal.

Kathmandu: The Nepal government has decided it will release a new, updated political map  which will include the disputed areas of Lipulekh, Kalapani and Limpiyadhura as part of Nepali territory.

India’s map have long shown these areas within India, though Kathmandu insists this is a violation of the 1816 Treaty of Sugauli.

The cabinet meeting held here on Monday endorsed the updated political map that includes a slive of land at the border with India near the Mahakali river as part of Nepal.

Government spokesperson Yuvaraj Khatiwada said that the new political map will be used  by every government body and in all text books.

Kathmandu has stepped up its protests on the border issue after the Indian defence ministry recently inaugurated a link road to the China border that passes through Lipulekh.

Following the road inauguration, the Nepal government released a press note stating that the eastern area from Mahakali River belongs to Nepal as per the Sugauli Treaty, 1816.

But the Indian government said that it had constructed the road in its own territory. A few days later,  the Indian Army chief General M.M. Naravane accused Nepal of acting ‘at the behest of someone else,’ a thinly veiled reference to China.

After a week of protest in Kathmandu, the Nepal government has now bitten the bullet and endorsed a new updated political map – something it had refrained from doing so far.

On Friday, President Vidya Devi Bhandari, while announcing the government’s policies and programmes for the upcoming fiscal year, had also said that the updated political map would be issued soon.