The return, a high-stakes gamble to galvanise their beleaguered party ahead of the July 25 election, could shake up a race that has thought to have been skewed by the military in favour of ex-cricket hero Imran Khan. 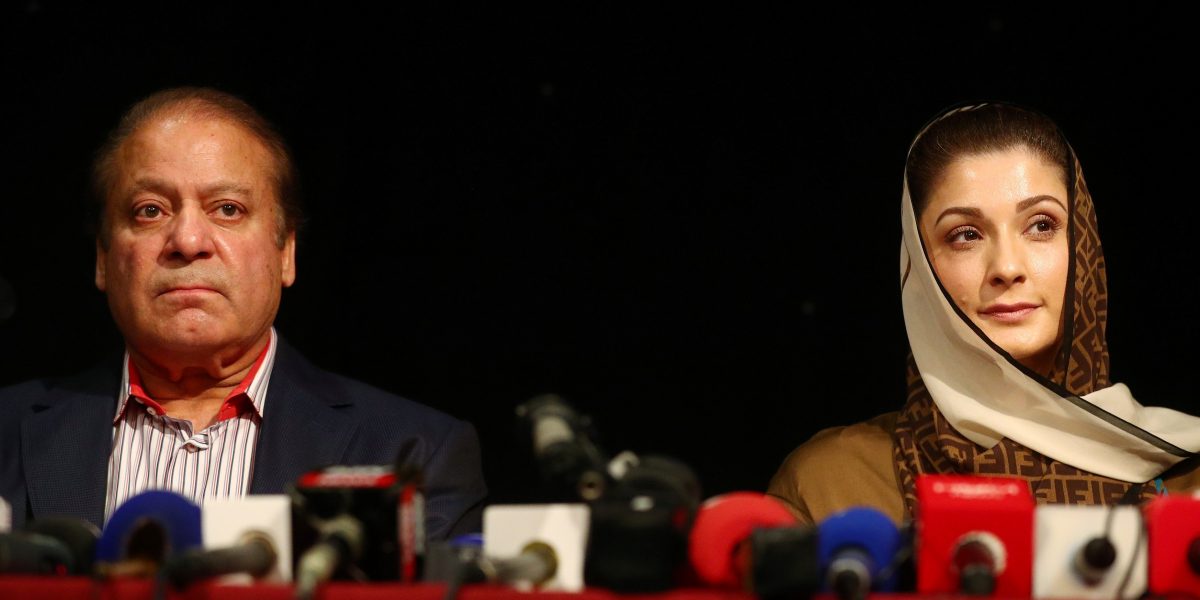 Ousted Prime Minister of Pakistan, Nawaz Sharif, appears with his daughter Maryam, at a news conference at a hotel in London on July 11, 2018. Credit: Reuters/Hannah McKay

Lahore: Ousted Pakistani Prime Minister Nawaz Sharif and his daughter Maryam arrived back to Pakistan on Friday to face lengthy prison sentences, in a high-stakes gamble to galvanise their beleaguered party ahead of a July 25 election.

The plane carrying Sharif and his daughter touched down in the central city of Lahore at around 8:45 pm. The pair, who were sentenced in absentia on corruption charges last week, were expected to be arrested soon after their arrival.

Their return could shake up an election race marred by accusations that Pakistan’s powerful military is working behind the scenes to skew the contest in favour of ex-cricket hero Imran Khan, who describes Sharif as a “criminal” who deserves no support.

Clashes broke out Friday evening at the main highway entry point to Lahore between pro-Sharif protesters and police who had been deployed in their thousands, a Reuters witness said. There were no immediate reports of injuries. 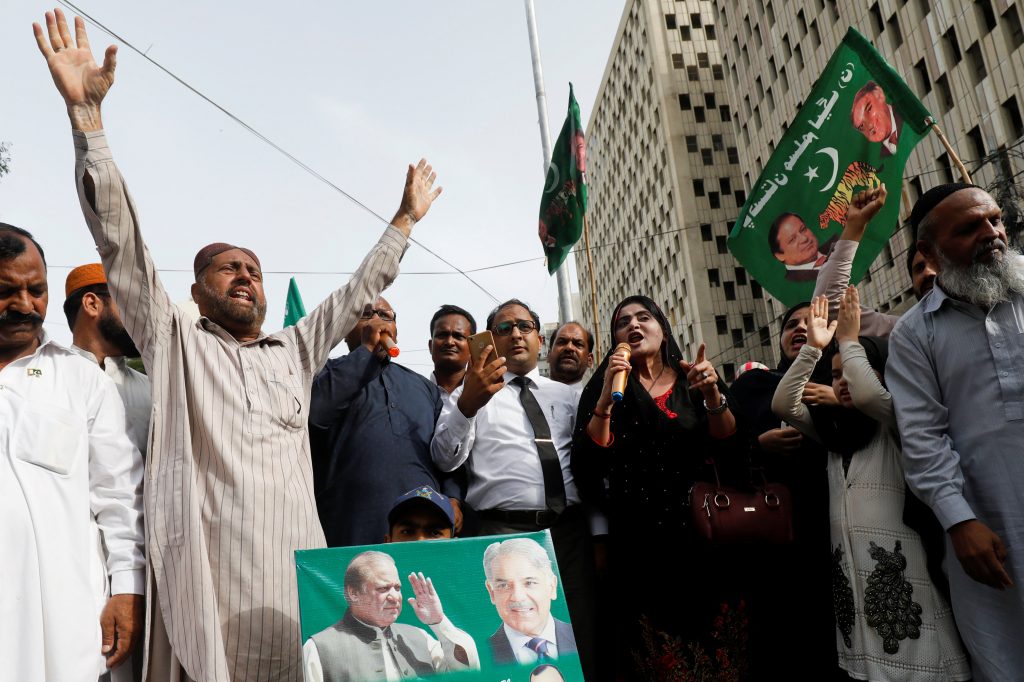 Supporters of the PML-N chant slogans against the arrest of their activists in Lahore who were on their way to welcome Nawaz Sharif and his daughter Maryam, during a protest in Karachi on July 13, 2018. Credit: Reuters/Akhtar Soomro

Mobile phone service was cut off by mid-afternoon, as Sharif’s brother, Shehbaz, led around 10,000 supporters of his Pakistan Muslim League-Nawaz (PML-N) on a march toward the city centre in defiance of a citywide ban on public gatherings, according to a Reuters witness.

Nawaz Sharif decried the tactics ordered by the caretaker government that took over in June ahead of the general election, as Pakistan’s constitution requires.

“What credibility will these elections have when the government is taking such a drastic action against our people and this crackdown is taking place all over the country?” Sharif told Reuters at the airport in Abu Dhabi as he waited for a connecting flight to Lahore.

Pakistan’s third major political movement, the Pakistan Peoples Party, joined the criticism of the crackdown, with its prime ministerial candidate Bilawal Bhutto Zardari questioning why Sharif’s supporters would be arrested and prevented from gathering.

“Why is Lahore under siege? Right to peaceful protest is fundamental for democracy,” tweeted Bhutto Zardari, the son of two-time prime minister Benazir Bhutto, who was assassinated at a political rally in 2007.

Adding to the tension surrounding the upcoming poll, a suicide bomber hit an election rally of a regional party in southwestern Pakistan, killing 70 people. The bombing was the biggest attack in Pakistan in more than a year and the third incident of election-related violence this week.

Sharif is returning from Britain after an anti-corruption court handed him a 10-year jail term and sentenced his daughter and political heir to seven years in prison after they failed to prove that money used to buy luxury flats in London in the 1990s was not ill-gotten.

Sharif alleges the military is aiding a “judicial witch-hunt” against him and his Pakistan Muslim League-Nawaz (PML-N) party. The party’s past five years in power has been punctuated by the civil-military discord that has plagued Pakistan since its inception. 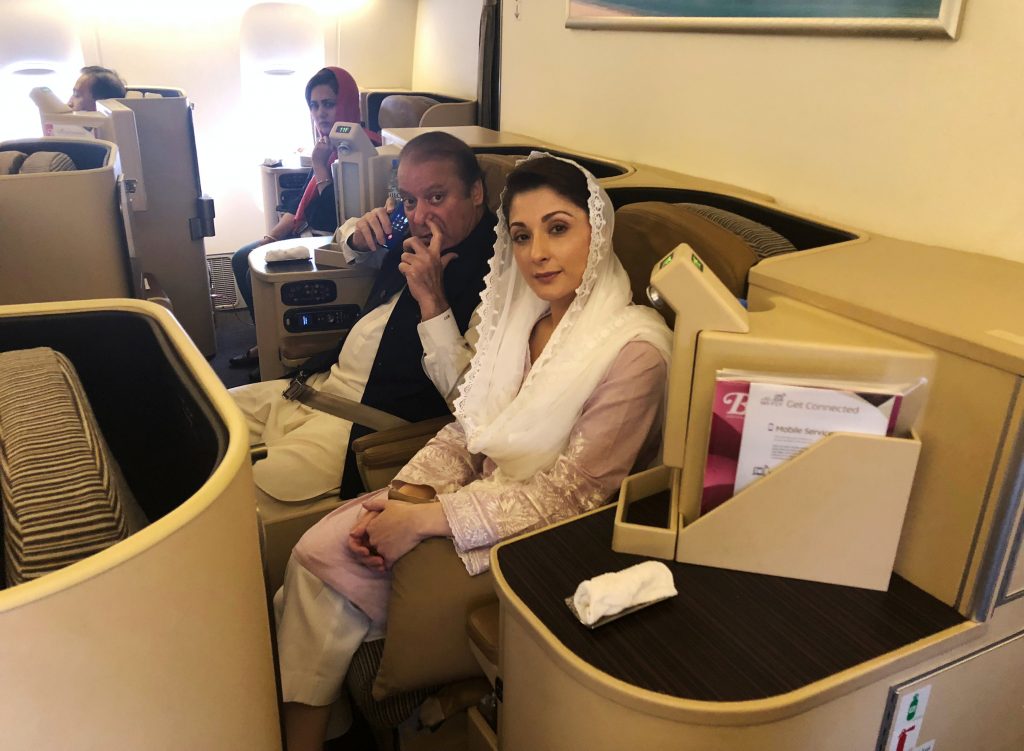 The military, which has ruled Pakistan for about half its history since 1947, has denied interfering in modern-day politics. It plans to place 371,000 soldiers around polling stations so there can a “free and fair” elections, an army spokesman said this week.

Sharif’s PML-N expects a groundswell of support as he returns from London, where his wife Kulsoom is critically ill and undergoing cancer treatment.

To prevent PML-N workers staging a hero’s welcome on the streets, authorities said they would arrest the father and daughter upon landing and transport them to the capital Islamabad by helicopter, local media reported.

Sharif’s return comes at a time of dwindling fortunes for his party, which a year ago was considered a run-away favourite to retain power.

Recent opinion polls suggest PML-N is losing its lead nationally to the Pakistan Tehreek-e-Insaf (PTI) party of arch-rival Khan, whose anti-corruption message has resonated with many Pakistanis.

Sharif was ordered jailed in a case stemming from 2016 Panama Papers revelations that showed they owned the apartments through off-shore companies. Maryam was convicted for concealing ownership of the apartments. They both deny wrongdoing.

After the Supreme Court ousted Sharif last July, the courts barred him from heading the PML-N party he founded. His brother Shehbaz became PML-N’s president, but Sharif remains the power behind the throne.

Since then, a host of his allies have been either disqualified by the courts, or face corruption cases. Many PML-N lawmakers have also defected to Khan’s party.

PML-N has also been riven by internal divisions. Sections of the party oppose Sharif’s combative approach against the army and fear it will turn off voters in a deeply conservative and patriotic Muslim nation of 208 million people.

The kind of reception Sharif receives on the streets of Lahore will be viewed carefully in Pakistan, where political popularity is often measured by the size of rallies that politicians can attract.

PML-N leaders say authorities have launched a crackdown against union council leaders, the street-level party workers who bring out people on the streets, detaining hundreds of workers over the last 36 hours.