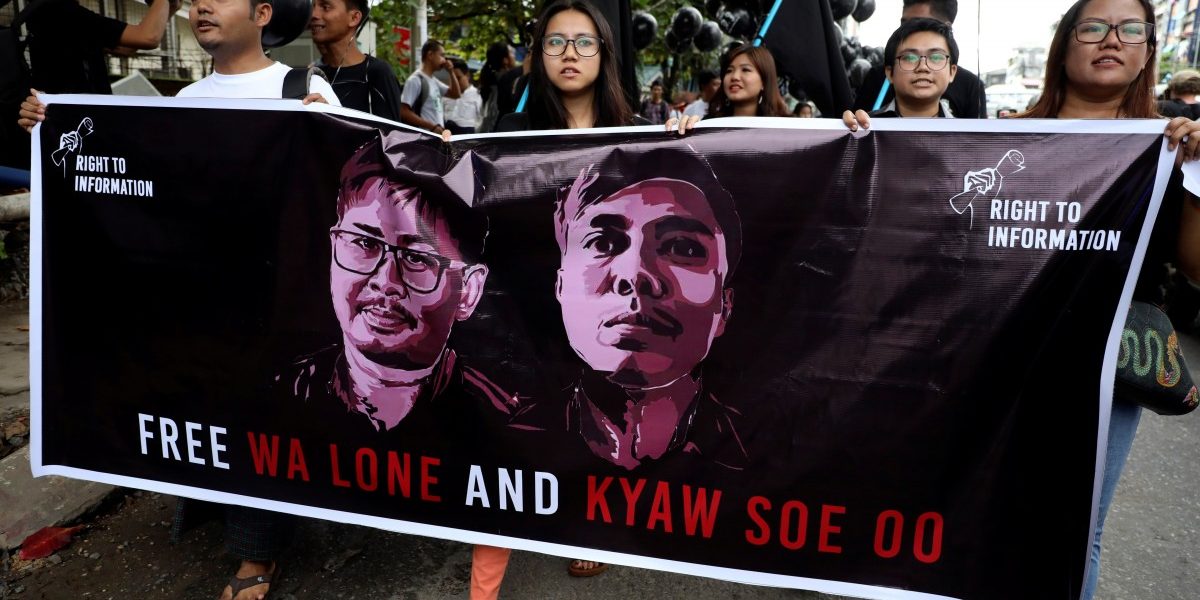 On May 7, the Myanmar government announced the release of two jailed local Reuters correspondents, Wa Lone and Kyaw Soe Oo, as part of a presidential pardon delivered annually on Burmese New Year. In total, 6,520 prisoners were released in Tuesday’s mass amnesty drive by President Win Myint.

Lone and Oo were arrested by the police in December 2017 while reporting on a story about the mass murder of 10 Rohingya men by Myanmar security forces in Northern Rakhine, and were later charged under the Official Secrets Act for possessing classified documents.

Last September, after almost eight months in detention, a district court sentenced them to seven years in prison. Their subsequent appeals to the Yangon High Court and the Supreme Court were dismissed in January and April of this year, respectively.

Lone and Oo were awarded the Pulitzer Prize last month for their story on the unlawful murder of Rohingya men.

The pardon – which came after a high-profile campaign led by Reuters, international human rights organisations and civil society activists in Myanmar – brings much relief and joy to the correspondents’ families, colleagues and friends. Missives of appreciation have flown in from various quarters, including Washington DC, Brussels, London and the UN. Without doubt, it is a crucial victory for independent journalism in the country and also, an indication that sustained diplomatic engagement and pressure from civil society can, in even the most difficult of circumstances, work.

But, to over-enthuse over this would be a mistake. There is a deeper malaise that plagues Myanmar today – one that annual Presidential amnesties cannot fix.

Reuters reporters Wa Lone and Kyaw Soe Oo react in a vehicle after being freed from Insein prison after receiving a presidential pardon in Yangon, Myanmar, May 7, 2019. Credit: Reuters/Ann Wang

Since the popularly-elected National League for Democracy (NLD) government came to power in 2015, lawmakers and military officers have rampantly used the country’s laws to go after journalists and activists with the aim of shutting down even the most benign forms of dissent against the establishment.

Article 66(d) of the Telecommunications Act has been the most-used legislation in this regard, followed by the Unlawful Associations Act, Section 505(a) of the Penal Code (undermining the military), and the Official Secrets Act.

To fully grasp how grave the situation is, one need only recall that last year in September, Nobel Peace Prize winner and Myanmar’s de facto head of state, Aung San Suu Kyi, actually defended the court’s sentencing of the two Reuters journalists, arguing that “they were not jailed because they were journalists” and that the case “had nothing to do with freedom of expression at all”.

Yet, according to recent civil society estimates, 23 cases were brought against the media under the Telecommunications Act and 31 journalists have been put on trial since Suu Kyi came to power. The past few weeks have been particularly damaging for press freedom in Myanmar.

On April 12, prominent filmmaker and human rights activist, Min Htin Ko Ko Gyi, was arrested for a series of posts on Facebook criticising the military-drafted 2008 Constitution, after a military officer from the Yangon Regional Command filed a lawsuit against him under both the Telecommunications Act and Section 505(a) of the Penal Code. Gyi, who is recovering from a liver cancer surgery, was denied bail twice.

On April 12, in a separate case, the military’s Yangon Regional Command filed a case under the Telecommunications Act against The Irrawaddy’s Burmese edition editor, U Ye Ni, for “unfair coverage” of the ongoing armed conflict between the military and the Arakan Army in Rakhine State.

On April 19, a Lieutenant-Colonel slapped dual charges under the Telecommunications Act and Section 505(a) on five members of the Peacock Generation thangyat troupe, a traditional theatre group that employs satire to criticise the establishment. They were denied bail three days later and packed off to Insein Prison. On the same date, in a separate case, a former military officer, Captain Ko Nay Myo Zin, was arrested for giving a speech against the military.

On May 6, the Ministry of Home Affairs’ Special Branch (SB) opened a case against the chief editor of the Rakhine-based Development Media Group (DMG), U Aung Min Oo, under the Unlawful Association Act. DMG is a popular Arakanese media group that has been reporting closely on the ongoing military-Arakan Army conflict.

On May 9, it was reported that the military has filed a lawsuit against a group of comedians of the Zwe anyeint troupe for a performance deemed to be defamatory to the military.

The list is endless, and these are only some of the most recent incidents. 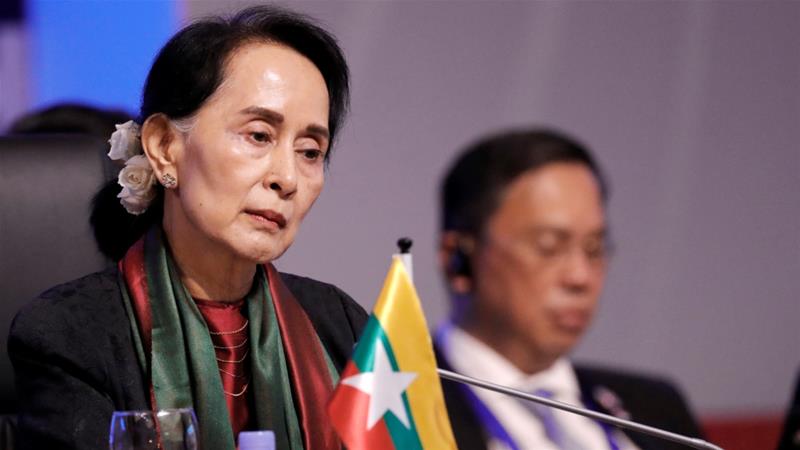 World over, criticism has poured in over Aung San Suu Kyi’s inaction over alleged atrocities against Rohingyas in Rakhine. Credit: Dondi Tawatao/Reuters

Despite much brouhaha over Myanmar’s new democracy, it has become amply clear that neither of the country’s two power centres – the military and the civilian government – appear to have an appetite for criticism from the media or the civil society.

By relentlessly pursuing cases against journalists and activists, the establishment – which is awash with a troublesome legacy of six decades of totalitarian rule – is only normalising a highly stunted idea of democracy in the general public discourse. The core principle of the freedom of the press is being continuously negated, in a stark throwback to the repressive days of the military regime.

The messaging here is less than subtle – any journalistic work or public speech act that calls out the government or the military for its misdoings is, by default criminal, and the law of the land agrees. For the military, particularly, the independent media and civil society have become de facto adversaries. This was made clear recently when the military’s ‘True News Information Team’ said, in a somewhat sinister tone, that the media’s constant criticism had “exhausted its patience” and the recent cases brought against journalists and activists were in that vein.

What is perhaps of greater alarm is the pro-establishment position that Myanmar’s courts have been taking on such cases. Instances, where a court has dismissed charges brought by the military or the government against the civil society, are rare. Instead of reining in the lawsuit frenzy, the country’s top judges have only encouraged the establishment’s anti-democratic impulses.

In a country where military executives command strong political leverage, the judiciary ought to be not just rational, responsible, and critical, but also courageous. Yet, Myanmar’s courtrooms continue to be cast with shadows of a hypersensitive establishment.

Lone and Oo should not have been put in jail for their journalistic work in the first place, let alone be given a seven-year sentence. The higher courts, especially the apex court, should’ve ideally set the lower court’s conviction aside given the glaring inconsistencies in the prosecutor’s version of events and a shocking testimony about a set-up by a police officer early into the trial. The courts, instead of heeding the police officer’s testimony, sentenced him to a year in jail.

So, to quickly conclude, as the UN in Myanmar said on Tuesday, that the Lone-Oo pardon is a “sign of the government’s commitment to the transition to democracy”, or the beginning of a new era of transparency, as the UK’s Foreign Secretary, Jeremy Hunt, asserted, would be hasty. If anything, it is merely an outcome of sustained and deft diplomacy by a group of important people with deep links to the international community.

Myanmar doesn’t need pardons to cure its anti-democratic affliction. It needs a bottom-up change in institutional attitudes. It needs thorough legal and political reforms to give the civil society and media their inherent right to free speech and criticism.

The laws that facilitate rampant punitive action for simply criticising the civilian government and military need to be done away with or cleansed. The judiciary needs to stop succumbing to the establishment’s whims and set strong democratic precedents – perhaps even take the lead in killing archaic legal provisions.

These are reforms that warrant much deeper and longer engagement with Naypyitaw than negotiating a one-time pardon. Hence, influential international actors in Myanmar who may be able to use their leverage to change institutional behaviour, including foreign media and governments, must not let the Lone-Oo release drive them into complacency. This is only if they do not wish to see another bunch of journalists thrown behind bars just for doing their job.