The USDP alleged irregularities from poor-quality ballot boxes and envelopes to advanced voting problems and government cash handouts that it said amounted to NLD bribes. The military-backed Union Solidarity and Development Party (USDP) called on authorities to hold another contest as soon as possible “to have an election that is free, fair, unbiased and free from unfair campaigning”.

The USDP challenge came as the ruling National League for Democracy (NLD) party looked set for its second successive election sweep, with wins in more than 80% of seats so far declared, with about a third of the results announced.

The NLD had won 209 of the 249 declared seats in the bicameral legislature compared with 15 for the USDP as of Wednesday night. The NLD needs 322 seats to form the next government and has already claimed victory in Sunday’s contest.

The NLD won by a similar margin in the last election in 2015, which was the first vote since the end of nearly 50 years of strict military rule and quasi-military rule.

A big win would be a welcome boost for Suu Kyi, a Nobel Peace laureate who has had a turbulent first term and struggled to meet high public expectations. She is tasked with developing a country that suffered decades of decay and required to govern with a military that persecuted her and the NLD for years.

The ballot was seen as a referendum on her fledgling democratic government, which is hugely popular at home. But its reputation abroad has collapsed due to accusations of genocide against the country’s Rohingya Muslim minority, which it denies.

Several dozen pro-USDP demonstrators gathered on Wednesday in the capital, Naypyidaw, carrying signs with slogans calling for a new and fair election.

The USDP challenge comes after weeks of unverified content and disinformation spread on social media about electoral fraud or irregularities before the ballot.

The NLD demanded proof of wrongdoing.

“There will always be some people who say it is not fair,” NLD spokesman Myo Nyunt said. “They must present evidence for their accusations.”

The military in an earlier statement said the election was carried out “successfully”. It made no immediate comment on Wednesday.

International and local observers said the vote went smoothly and without major irregularities.

The Election Commission on Wednesday said the allegations were from a minority of participants and the rest had approved. 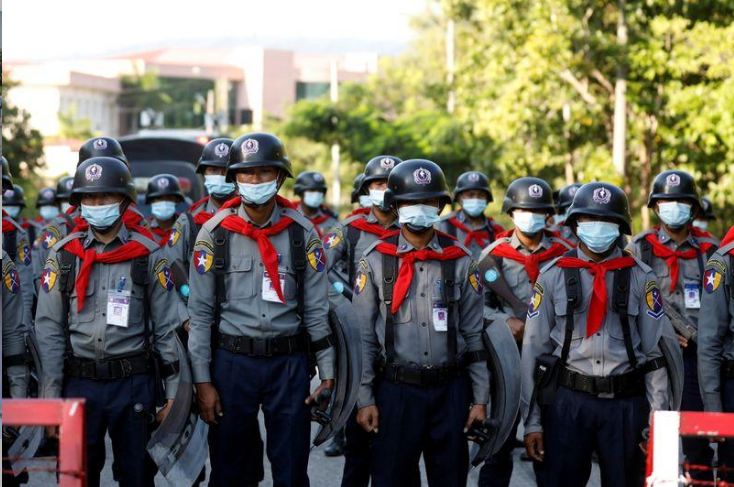 Despite the emergence of new parties, the contest was seen as a straight choice between the NLD and the USDP, the political juggernaut created by the junta before it ceded power.

The election body was criticised before the vote, including by the military commander-in-chief, senior General Min Aung Hlaing, who said there were “unacceptable mistakes”, underlining tension between the government and the military, which controls several key ministries.

“We’ve seen these narratives of bias, process irregularities and alleged fraud being pushed for weeks on social media – including by inauthentic actors and disinformation campaigns,” said Myat Thu.

Richard Horsey, a Yangon-based analyst with the International Crisis Group, said the USDP had signalled long before that it would not accept the outcome.

“It should be seen as a sign of desperation and the only way it could save face,” he said.

“Once again the party has fundamentally misjudged the public mood.”