Adding to the diplomatic pressure, Japan said it had agreed with India, the US and Australia on the need for democracy to be restored quickly. 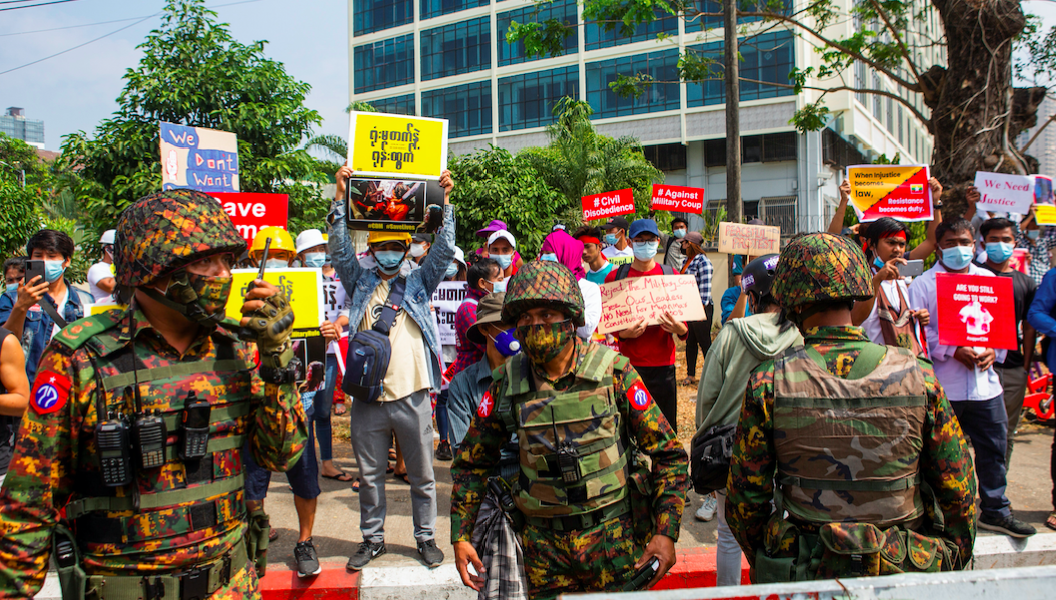 Soldiers stand outside Myanmar's Central Bank during a protest against the military coup, in Yangon, Myanmar, February 15, 2021. Photo: Reuters/Stringer

Opponents of Myanmar’s coup welcomed new sanctions from Britain and Canada as protesters took to the streets on Friday, marking two weeks of daily demonstrations against the Southeast Asian country’s military for seizing power.

Adding to the diplomatic pressure, Japan said it had agreed with India, the United States and Australia on the need for democracy to be restored quickly after the February 1, 2021 army takeover in which elected leader Aung San Suu Kyi was detained.

Youth leader and activist Thinzar Shunlei Yi applauded Britain’s asset freezes and travel bans on three generals as well as steps to stop any aid helping the military and to prevent British businesses working with the army. Canada said it would take action against nine military officials.

“We urge other nations to have such coordinated and united response,” she wrote on Twitter. “We will be waiting for EU sanctions announcement on 22nd,” she said, calling on people to gather at the EU office to push for sanctions to include measures against military businesses.

A small group of opponents of the coup gathered outside the British embassy in the main city of Yangon saying they wanted to offer thanks for the support. A member of staff came out to talk to them.

Protesters waving signs and flags drove around the northern city of Myitkyina on motorbikes, images on social media showed, and confronted police blocking some roads. Clashes have occurred in the town, the capital of Kachin State, over the past two weeks with police firing rubber bullets and catapults to disperse crowds.

Myanmar’s junta has not yet reacted to the new sanctions. On Tuesday, an army spokesman told a news conference that sanctions had been expected.

There is little history of Myanmar’s generals giving in to foreign pressure, and they have closer ties to neighbouring China and to Russia, which have taken a softer approach than long critical Western countries. Junta leader Min Aung Hlaing was already under sanctions from Western countries following the 2017 crackdown on the Muslim Rohingya minority. “Sanctioning military leaders is largely symbolic, but the moves to sanction military companies will be much more effective,” said Mark Farmaner, director of the Burma Campaign UK group in a reaction to the sanctions.

After nearly half a century of full military rule, businesses linked to the army have a significant stake across the economy in the country of 53 million people, with interests ranging from banking to beer, telecoms and transport.

The army seized back power after alleging fraud in the November 8, 2020 elections won by Suu Kyi’s National League for Democracy party, halting a transition to democracy that had begun in 2011 and detaining her and hundreds of others. Myanmar’s Assistance Association for Political Prisoners said 521 people had been detained as of Thursday. Of them, 44 had been released.

The junta has also come under pressure from demonstrations and a civil disobedience campaign that has paralysed much government business.

More protests were planned on Friday, marking the 14th day of what have become the biggest street demonstrations since the “Saffron Revolution” protests in 2007, which, though suppressed, helped nudge the military to begin withdrawing from politics.

The marches have been more peaceful than the bloodily suppressed demonstrations under previous juntas, but police have fired rubber bullets several times to disperse protesters. One protester is expected to die after being shot in the head in the capital Naypyitaw last week. The army says one policeman died of injuries sustained in a protest.

Three people were wounded by rubber bullets late on Thursday in the south-eastern town of Dawei when members of the community took to the streets to prevent the arrest of a protest leader, media outlet Dawei Watch said.

Protesters have called for the recognition of last year’s election as well as the release of Suu Kyi and other detainees. Suu Kyi faces a charge of violating a Natural Disaster Management Law as well as charges of illegally importing six walkie talkie radios. Her next court appearance has been set for March 1, 2021.

Suu Kyi, 75, spent nearly 15 years under house arrest for her efforts to bring democracy to Myanmar and won the Nobel Peace Prize in 1991 for her struggle.