Azadi March: A Catalyst For Democratic Change or Contradictory Processes?

The Maulana has dared to challenge an authoritarian system, but the fate of democracy will remain in doldrums until all democratic forces mobilise the downtrodden people of Pakistan. 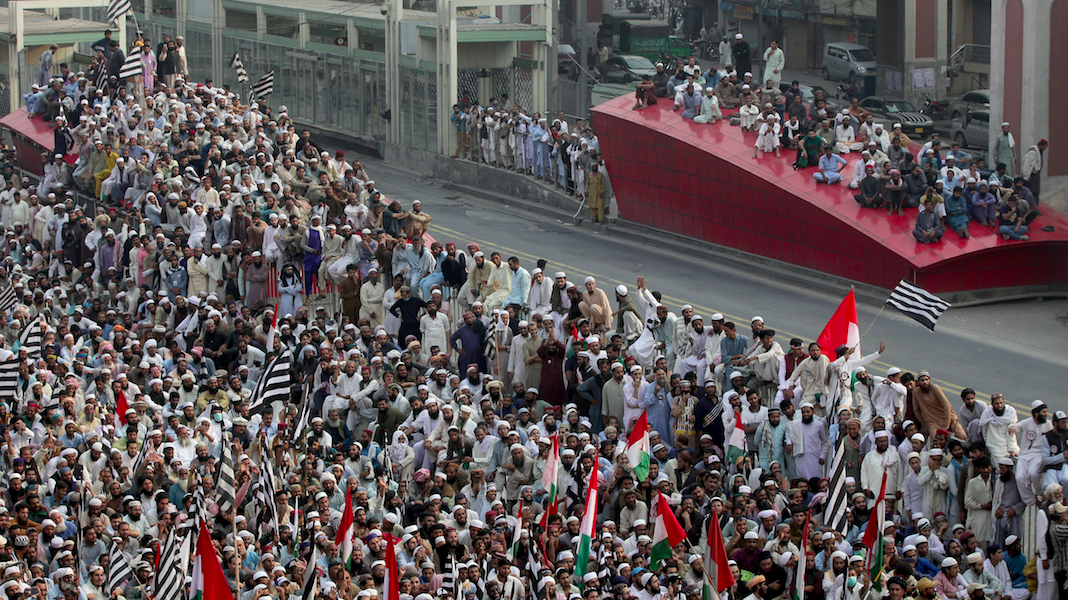 Supporters of religious and political party Jamiat Ulema-i-Islam-Fazal (JUI-F) listen to the speech of their leaders, during what they call is the Azadi March (Freedom March) to protest the government of Prime Minister Imran Khan in Lahore, Pakistan on October 30, 2019. Photo: Reuters/Mohsin Raza

According to Imtiaz Alam, this column written by him has been censored in Pakistan where news portals have refused to publish it. The Wire is publishing the article to ensure it reaches a wide audience in South Asia and the world.

When Maulana Fazl-ur-Rehman created a stir after arriving in the capital of Islamabad by saying that the Azadi March had potential to enter the prime minister’s house and arrest him, I recalled the plight of former prime minister Nawaz Sharif under the siege of the Imran Khan-Tahirul Qadri sit-in. I once asked him about his situation when rioters were knocking at the doors of PM House, and Nawaz Sharif told me how helplessly he was awaiting his own bloody demise. But, despite much greater numbers and motivation, the Azadi marchers had to stay put, away from the Red-Zone since Prime Minister Imran Khan still remained in safe hands.

Unlike Imran-Qadri’s long sit-in, sponsored by those trying to destabilise the Sharif government, the Azadi March is a demonstration of the downtrodden people of the most backward regions —predominantly from Khyber Pakhtunkhwa and Baluchistan and partly from Sindh and southern Punjab — against their deprivations and the illusion of a “false consciousness”.

It could, however, become a catalyst for contradictory processes that might be different from what is contended by antagonists in a precarious civil-military equation. Regardless of religious overtones, it is the frustration of the toiling masses of deprived Pashtun regions that has fuelled the revolutionary sentiment into the moderate conservative sections of the Deobandi school and the Pashtun nationalists.

Also read: Who is Fazl-ur-Rehman, and Can He Topple Pakistan’s Hybrid Regime?

We see in the march, the struggle of frustrated Pashtun youth for their democratic rights. Annoyed with the populist mimicry of ‘change’, the secular Pashtun nationalists Mehmood Khan Achakzai (PKMAP) and Mian Iftikhar Hussain (ANP) and the motivated cadres of Jammiat Ulema-i-Hind’s anti-colonial legacy have joined hands to challenge a Viceroy-type, semi-colonial authoritarian structure.

Surprisingly, a JUI activist from Baluchistan even told me that “the overthrow of Prime Minister Khan is not (their) ultimate aim; he should rather be pressurised to join hands in (their) struggle for civilian supremacy”.

Due to the foot-dragging by the so-called liberal parties of the centre-right and centre-left, the Jamiat Ulema-e-Islam-F is not in a position to instantly overthrow the Imran Khan government alone. It could, however, cause a serious dent in the diarchy of quasi-civilian and authoritarian structures. Interestingly, ousted from power, heterogeneous forces should be rallying against an exclusionary hybrid political structure. 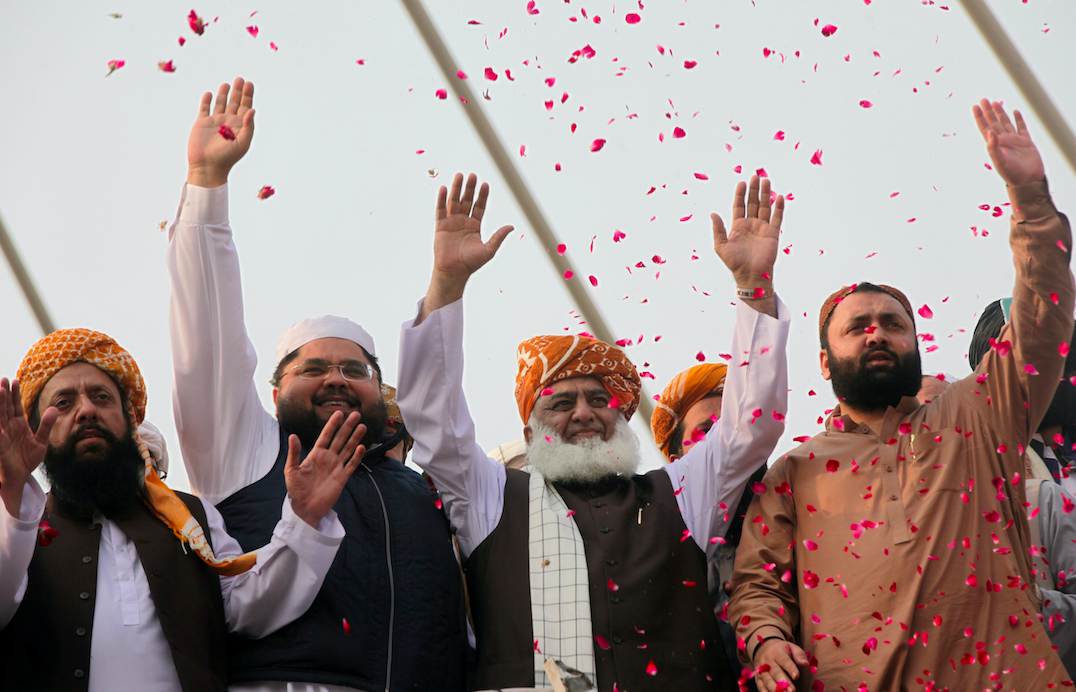 Indeed, the “status quo” that Imran Khan vowed to break is in a quandary at the hands of sham populism that ousted the parties of old regime and caused the marginalisation of most of traditional elites — both urban and rural. Coopted as a civilian façade by the powerful post-colonial power-structure, the populist regime has created a void without filling it with alternative forces of ‘change’.

The regime of ‘change’ has rather reinforced an autocratic power-structure at the cost of dominant civilian components and has, consequently, reinforced a worse status quo tilted against the constitutional order.

Riding a traditional conservative onslaught and exploiting the miseries of the rural masses of the most marginalised regions, Maulana Fazl-ur-Rehman is trying to win back the space lost with the break-up of the three-decades old mullah-military alliance.

Though the Maulana spent long years in democratic resistance against the most reactionary military regime of General Zia-ul Haq, he after losing the prime ministerial contest against General Musharraf’s proxy prime minister Zaffarullah Jamali in 2002, became a junior partner of the military regime under the aegis of his Mutahida Majlis-i-Amal (MMA), which formed the government in Khyber Pakhtunkhwa and became a coalition partner in Baluchistan.

At that time, he had accused General Musharraf’s political henchman General Zamir of horse-trading to subvert his maiden effort to become prime minister and now he, along with the Pakhtun nationalists, accuses General Zamir’s successor for his rout in Khyber Pakhtunkhwa and Baluchistan.

He has strongly aligned himself with the opposition’s outcry against what it alleges is the “stealing of the popular mandate”. In fact, both the victims of the authoritarian legacies of General Zia-ul Haq (PPP) and General Musharraf (PML-N) find a common cause against what they perceive as the propped-up puppet regime, while at once vying to find favour from the powers that be.

This is the same tendency for co-option and capitulation with autocratic establishment that cost both the PPP and PML-N governments heavily. They suffered due to their mutual hatred, despite the Charter of Democracy, and have now abandoned the Maulana. Without even effectively participating in the Azadi March and exploiting Maulana’s rabble rousing to his advantage, PML-N president Shehbaz Sharif even flouted the instructions of Nawaz Sharif in order to get some concessions for the medical treatment abroad of his critically ill brother. He has also, primarily, pushed forward his candidature in a probable in-house change.

Aware of Shehbaz’s Machiavellian machinations, a willy Maulana activated his connection with the well-connected Chaudhris of Gujarat, who on getting some wink from the right quarters got into the treacherous business of mediation. Waiting on the sidelines, the Speaker of Punjab Assembly, Chaudhry Pervaiz Ilahi could stage a friendly coup in Punjab where chief minister Ashiq Buzdar has already miserably failed.

The ‘middle-way’ being sought by the interlocutors could, however, become a precursor to an in-house change that could ease the political tension being perpetuated by an arrogant Khan whose disgusted allies seem to be eager to see his back.

After triggering the conflict within and finding his allies missing, Maulana avoided jumping the gun and decided to put his stay within the safer limits of ongoing power-play.

His two-day ultimatum for the prime minister’s resignation and its indefinite postponement allowed him the time to negotiate with those who wanted to keep their imposing space. Bilawal Bhutto’s apprehensions about the possibility of a takeover by the “third force” – though essentially unfounded since it is already in command – is coming into play in a very subtle way, if not immediately, but in the near future.

The issue of timing was and is quite crucial. Maulana’s onslaught looked premature and he should have waited for the fourth quarter of this fiscal year. He also miscalculated the eagerness of the two mainstream parties, who were still not prepared to pick the cudgel for civilian supremacy. Had they not been suffering from their expedient political interests, they would have joined hands not only in the long march but also in a joint sit-in that could have effectively paralysed a duel-power structure.

In the struggle to resolve the principal contradiction in civil-military relations, a conservative Maulana aimed for a greater resolution than his liberal allies who are still not resolved for a consistent democratic stand.

Consequently, it allowed Maulana to capture the centrestage. Abandoned by his liberal allies, Maulana is now relatively free to play his card to his advantage, with those who can have a bargain with him.

Barring his resignation, PM Imran Khan is showing some flexibility on the issues that are of greater concern to the helmsmen. But no one across the political spectrum is ready to shake hands with PM Khan, who has created a debilitating animosity within the whole political class. He has lost sufficient popular support, except those who remain enamoured by his cult, and has failed to deliver on most of his wild promises.

His main plank of accountability of the corrupt has boomeranged because of the witch-hunt and political victimisation of his major opponents. Surrounded by sycophants and amateur loyalists, he has no option but to increasingly rely upon his non-political patrons. The more he relies on the establishment, the greater the space he loses to wriggle out of the political mess that he has also accentuated.

The Maulana has dared to challenge an authoritarian system, but the fate of democracy will remain in doldrums until all democratic forces mobilise the downtrodden people of Pakistan and the Punjabis don’t remain sitting on the fence. The Maulana has extended his sit-in till next week in the hope of getting some political dividends, but a unified democratic struggle remains a farfetched dream.