Diplomatic sources indicated that India will seek to verify the extent of the discussion on joint patrolling of Maldivian territory. 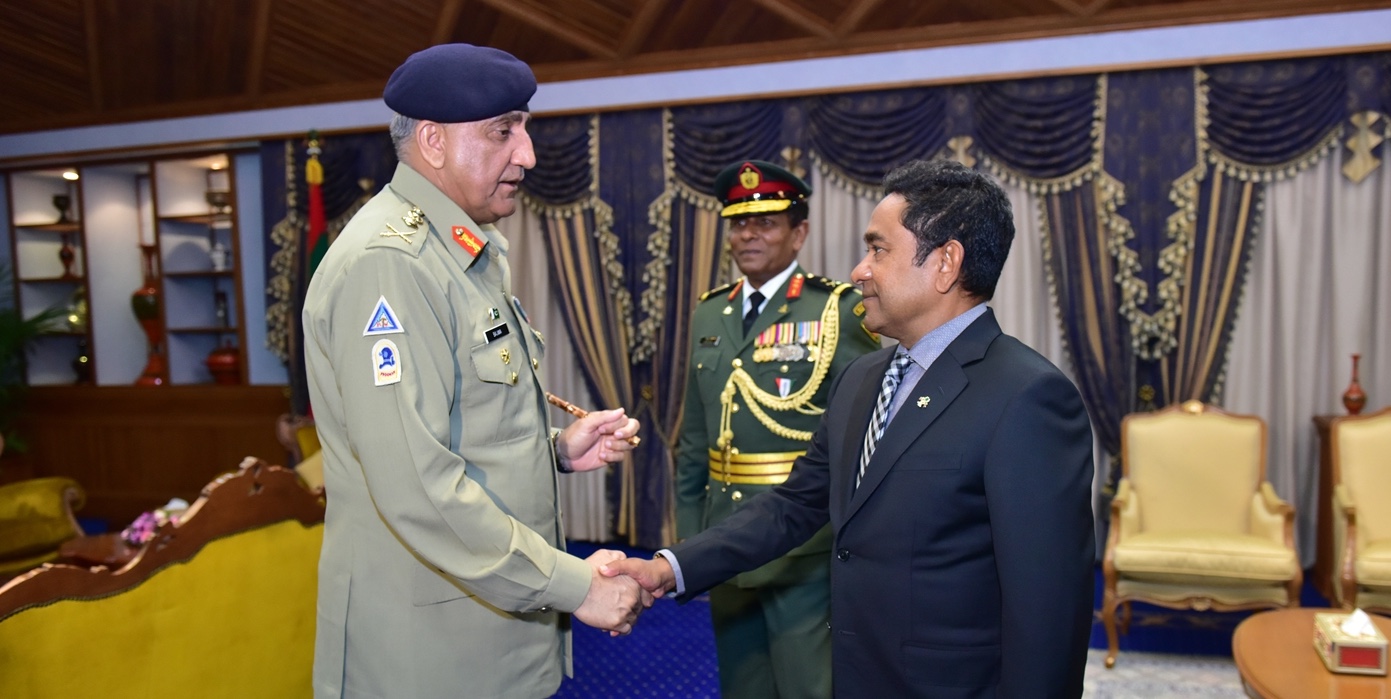 Qamar Javed Bajwa is on a rare visit to the Maldives for a Pakistani chief of army staff – his last two predecessors had not travelled to the archipelago. Credit: Maldives government website

New Delhi: Ringing alarm bells in India, Maldives and Pakistan have discussed the possibility of joint patrol of the vast exclusive economic zone (EEZ) of the strategically-located Indian Ocean state during the visit of the Pakistan army chief Qamar Javed Bajwa.

Bajwa is on a rare visit to the Maldives for a Pakistani chief of army staff – his last two predecessors had not travelled to the archipelago.

He is the highest ranking foreign visitor to Maldivian shores since the imposition of the state of emergency on February 4 and its subsequent lifting after 45 days.

The Wire was the first to report that Pakistan army chief would be flying into Maldives on his first ever visit during this period of volatile political developments in the Maldives.

He was invited by Maldives National Defence Force chief Major General Ahmed Shiyam, who also greeted him on arrival at Malé.

The press communiqué issued by the Maldives president’s office did not mention any specific topics touched during their meeting on April 1 morning.

As per the communiqué, Yameen expressed “hope and confidence that the Maldives and Pakistan will continue working together on bilateral and international issues of common concern, to further strengthen the close ties of friendship and cooperation that exist between the two countries”.

But the key phrase which is raising eyebrows in India is in a read-out of the meeting between the Pakistani visitor and the Maldivian defence minister.

The discussion about joint patrol by Maldivian and Pakistani naval forces in the EEZ would certainly raise the stakes for India.

Pakistan’s defence cooperation with the Maldives had largely been limited to training, port visits and occasional multilateral exercises.

Diplomatic sources indicated that India will certainly seek to verify the extent of the discussion on joint patrolling of Maldivian territory. An official pointed that, if true, the joint patrol between Maldivian and Pakistani naval forces would certainly be a ‘redline’ for India.

So far, India has been the only country with whom Maldives has conducted joint patrols of its EEZ, which covers around 900,000 square km. Indian naval assets, both surface and air, are used to provide assistance to the Maldives for surveillance of their EEZ. A large portion of the Maldives EEZ is adjacent to Indian territorial waters.

As per the 2016 India-Maldives MoU on defence cooperation, India and Maldives were in the process setting up a coastal surveillance radar system for “real-time surveillance of the EEZ of Maldives”. India was also supposed to provide a Dornier aircraft for EEZ surveillance.

India has been assisting in the surveillance of the EEZ of not just Maldives, but also other Indian Ocean island states of Mauritius and Seychelles.

India had earlier assessed the visit of the Pakistani army chief as a “political signal” from Malé to New Delhi. The timing of the visit, just after the state of emergency that had been criticised by US, India and other Western countries, was likely a result of a friendly nudge from a key international supporter of Yameen government, China.

Relations between the two Indian Ocean maritime neighbours have been especially strained since India asked the Maldives to implement the Supreme Court order of February 1 which ultimately led to Yameen imposing a state of emergency.

Maldives opposition leader and former President Mohamed Nasheed had asked India to make a military show of force in order to pressurise the Yameen government to allow more political space in the run-up to the presidential elections this year.

The Maldives government had claimed that the emergency had to be imposed because of a judicial ‘coup’ led by Chief Justice Abdulla Saeed, Judge Ali Hameed and former President Maumoon Abdul Gayoom. During the period of emergency, the truncated three-member Supreme Court had reversed part of the February 1 order which had called for the release of political prisoners. The opposition claims that even after the lifting of the emergency, there are still over 30 detainees behind bars.

The last public diplomatic spat between India and Maldives had been after Yameen announced that the state of emergency was over. The Maldives had described India’s statement that it was only a step towards restoring the constitution and full and independent function of judiciary and parliament as “not helpful”.