The art installation titled 'The Killing Fields of Karachi' paid homage to the 444 victims of the alleged extrajudicial encounters in Pakistan between 2011 and 2018. New Delhi: In an incident which has yet again strained the fragile fabric of artistic freedom, ‘The Killing Fields of Karachi’, an art installation at the Frère Hall of the Karachi Biennale 19 by Pakistani artist and academic Adeela Suleman was forcibly destroyed last month. The work comprised of 444 headstone-like sculptures which commemorated the 444 victims of alleged extrajudicial killings in Pakistan led by former police superintendent Rao Anwar, who is currently facing trial, between 2011 and 2018. The headstone-like sculptures were destroyed by police personnel who entered the event in plainclothes. Photo: Twitter/Mubashir Zaidi

According to ArtAsiaPacific, members of the Pakistan police entered the event in plainclothes on October 27 and attempted to smash the sculptures. When they were stopped by protesters, they vowed to return and smash the rest of the sculptures as well. Suleman said that the authorities also wanted a video on one of the victims, Naqeebullah Mehsud, to be censored. Mehsud’s death in 2018 had set off violent protests across the country.

“A few men had been asking about the work since the morning and inquiring who had made it. At 12 pm, two men in plain clothes pressurised the manager of the Frère Hall to close the room. They had enough power to get the room closed and to threatened that if it was not closed, it would be sealed permanently,” Suleman told The Wire.

“The men also demanded that the tombstone-like pillars outside the room be removed as soon as possible and that if they were not removed, trucks would come and take them away.”

Also read: Venice, the Apocalypse and an Opera

The Karachi Biennale was founded in 2016 as a platform to inspire creativity and innovation in the visual arts. They held their first event in 2017 in which artists were invited to respond to the theme “Witness” with their work. Their second event, the Karachi Biennale 2019, was held on the theme of “Ecology and the Environment”. On October 28, the organisation released an official statement on Facebook, claiming to be against the censorship of art but also alleging that the art installation by Suleman did not conform to the stated theme.

“I think to look at the theme “ecology and environment” through such a narrow lens shows their narrow understanding. I thought the work fit beautifully with the theme as I was talking about the human ecology and the ecology of violence, and its effect on humans and on their physical environment,” Suleman said, responding to the statement.

On the same day, protesters – largely from among the artists at the event – organised a demonstration in the form of a die-in. The protesters lay down between the sculptures to prevent their removal and also pretended to be dead, exhibiting the deaths of the victims of the alleged extrajudicial killings. In spite of the protest, the work was destroyed by unidentified men on the morning of October 29. On October 28, protesters at the event held a die-in to protest against the forcible removal of the art installation. Photo: Twitter/Omar R Quraishi

“On October 29 at 8:15 am, I received images from my friend showing that all the pillars were dismantled, in a way that they could not be resurrected. And then I got the news that 15 to 20 people came and broke the pillars further into small pieces with hammers and took every piece away with them in their trucks,” Suleman said.

“Only they can explain why they did what they did, as my work was about a case whose facts were public knowledge…This case has been discussed by the electronic media, social media, and print media to death. There was nothing in the film that was not known to the general public.”

The Pakistan Academics Collective released a statement condemning  the removal of Suleman’s artwork while supporting the artist’s freedom of expression. It was retweeted multiple times on Twitter.

Please read and share the Progressive Academics’ Collective’s statement in support of Adeela Suleman and against the removal of her installation ‘Karachi’s Killing Fields’, which was part of the Karachi Biennale 2019. pic.twitter.com/U8elvxMNn0

When asked if Suleman knew whether there was any agenda behind the removal of the artwork, she replied that she did not. She said that if it was done to hide her artwork from the public, then they had made a mistake.

“If it was done for the general public to not see the work, then they are sadly mistaken because in this age of social media, nothing can be hidden. If in the Biennale 1,000 people would have seen it, now the work has been shared locally, nationally and internationally,” she added.

Former police superintendent Rao Anwar is currently facing trial for his alleged crimes. He has been accused of carrying out extrajudicial killings and fake encounters from 2011 to 2018, which left as many as 444 people dead. In January 2018, he led a police operation in the town of Shah Latif that led to the deaths of Naqeebullah Mehsud and three others. He claimed that they were members of the Tehrik-i-Taliban Pakistan but Mehsud was later discovered to be an innocent aspiring model. Besides his controversial police career, Anwar has also been notoriously linked to land grabbing and gravel and sand mining in the Malir and Gadap areas of Karachi.

“I was amazed as there was nothing in the film that I thought would arouse such a censorship reaction. It was just narrating a story of a young 27-year-old boy who came to Karachi to open a shop and was aspiring to become a model, and what actually happened to him,” Suleman told The Wire.

Also read: A Song of Love For a Time Filled With Hatred

On being asked if her work was a form of protest, she replied that it was not. “My art was a form of a memorial and not a protest. A work that was telling the general public a story and asking if we don’t do anything about it, won’t we be lying beside them one day? It was a sign to say to the deceased persons that we will not forget you!”

The Karachi-based artist has an impressive repertoire. After the Baldia factory fires of 2012, she had created a monument in 2013 to honour the 256 factory labourers and workers who had died there. The Baldia factory fires are considered to be the worst in Pakistan’s history, with the fires in the garment factories of Lahore and Karachi leaving 289 people dead due to the negligence and non-compliance of the factory owners in following safety protocols. In order to make sure that her message found its mark, she had used similar bricks in the monument that were used to block the windows and the fire exits of the factory. Each brick also had a victim’s name inscribed on it. 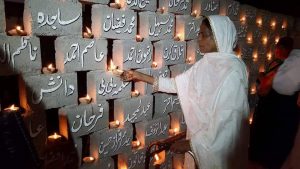 Delhi-based musician Rahul Rajkhowa, whose music has brought relevant issues to the forefront of discussions, expressed his anguish at the turn of events and the act of vandalism that followed.

“In an era where most people are afraid to speak up and present opinions that reflect the real mood of the society, artists are some of the only people who are keeping the balance,” Rajkhowa told The Wire.

If you are destroying paintings, abusing those online that creatively express counter opinions then that behaviour is nothing sort of hooliganism.
You lot are the ones promoting violence and instigating negative behaviour.#KarachiBiennale https://t.co/Qoxf6Ngh5N

Rajkhowa had himself been at the receiving end of online trolling and hate when he had brought the recurring issue of the floods in his home state of Assam into the limelight through his music. He continues to write music which highlights topics that demand detailed deliberation and scrutinised discussion.

The destruction of Suleman’s artwork is, unfortunately, the latest in a long list of instances of artistic freedom being curbed. Many a times, artists find themselves silenced when expressing an opinion which is taken to be a voice of dissent, be it through their work or their words. Even as more often than not society turns a blind eye, perhaps it’s worth taking a closer look at the words on a plaque along Adeela Suleman’s 444 pillars and wilted flowers:

“When confronted with violent terror, we acquiesced, in denial that the same beast of intolerance raged rampant within our own souls. Do you wonder why we lie before you, the countless unmourned? We ourselves are the victim but also the perpetrator of this very terror.”