A group monitoring the Rohingya crisis accused India of trying to shirk responsibility, saying keeping the refugees "at sea put their lives at further risk". 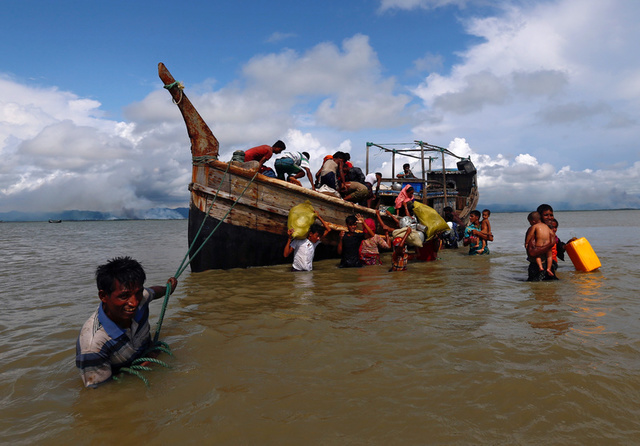 Representative image: Rohingya refugees get off a boat after crossing the Bangladesh-Myanmar border through the Bay of Bengal in Shah Porir Dwip, Bangladesh September 11, 2017. Photo: Reuters

New Delhi/Dhaka: India’s coast guard found 81 survivors and eight dead on a boat crammed with Muslim Rohingya refugees adrift in the Andaman Sea, and were repairing the vessel so that it can return safely to Bangladesh, Indian officials said on Friday.

The Indian government was in discussions with Bangladesh to facilitate the safe return of the vessel, which was found drifting in international waters having left southern Bangladesh about two weeks ago with hopes of reaching Malaysia. The boat had sailed on February 11, 2021 from Cox’s Bazar, Bangladesh carrying 56 women and eight girls as well as 21 men and five boys, officials said.

Many of the survivors, according to Indian officials, were sick and suffering from extreme dehydration, having run out of food and water after the boat’s engine failed four days after leaving Cox’s Bazar, where refugee camps house hundreds of thousands of Rohingya who have fled neighbouring Myanmar.

“The engine of the boat broke down earlier this week and we received an SOS from some Rohingya,” said an Indian coast guard official overseeing the search and rescue effort from New Delhi. “It’s a humanitarian crisis and we are doing the best we can to save their lives,” he said, requesting anonymity as he was not authorised to speak to the media.

Watch: ‘The Fate of the Rohingya Hangs in the Balance’: Avinash Paliwal

“The foreign ministry is working towards sending them back to Bangladesh and India will repair or replace the boat’s engine to ensure they can travel back safely.” The survivors were being provided with food supplies and medicine, and women and children have been given fresh clothes. It was unclear what arrangements were being made for the funeral rites of the people who died, the coast guard official added.

Announcing that the boat had been found, MEA spokesman Anurag Srivastava said on Thursday two Indian coast guard ships were dispatched to search for the vessel following urgent calls for help.

The United Nations refugee agency, UNHCR, had raised the alarm earlier this week over the missing boat.

“We understand that around 47 of the occupants of the boat are in possession of ID cards issued to them by UNHCR office in Bangladesh stating that they are displaced Myanmar nationals,” Srivastava said. Of the 90 people that had set out on the voyage, eight were found dead, and one was missing, he added.

More than 1 million Rohingya refugees from Myanmar are living in teeming camps in Bangladesh, including tens of thousands who fled after Myanmar’s military conducted a deadly crackdown in 2017. Human traffickers often lure Rohingya refugees, promising them work in Southeast Asian countries like Malaysia.

Also read: Argentina Is Taking a Unique Route to Try Myanmar’s Leaders for Crimes on Rohingya

A Bangladeshi foreign ministry statement said the boat had been traced some 1,700 km (1,056 miles) away from Bangladesh and 147 km (91 miles) from India’s Andaman and Nicobar Islands. “Other states, particularly those on whose territorial water the vessel has been found, bear the primary responsibility and they should fulfil their obligation under international law and burden-sharing principle,” it said.

India did not sign the 1951 Refugee Convention, which spells out refugee rights and state responsibilities to protect them. Nor does it have a domestic law protecting refugees, though it currently hosts more than 2,00,000, including some Rohingya.

Chris Lewa, director of the Arakan Project, a group that monitors the Rohingya crisis, accused India of trying to shirk responsibility, saying keeping the refugees “at sea put their lives at further risk”.