Is there a method to this madness? Can the Supreme Court of Pakistan redeem itself at this crucial juncture? If it fails, will opposition parties rise to the occasion? 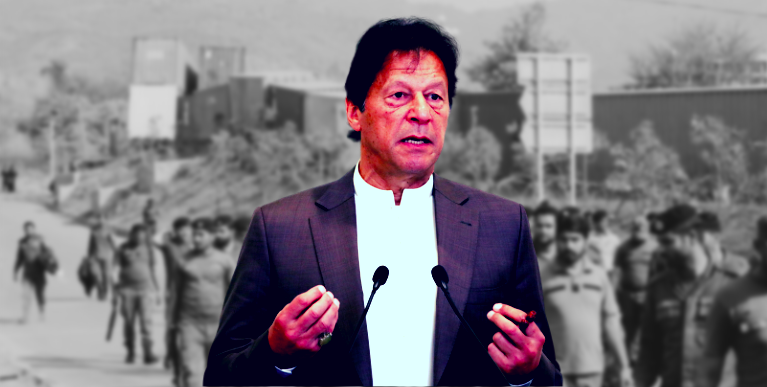 Imran Khan. In the background, police officers walk by shipping containers used to block the road leading towards the Red Zone and parliament building, in Islamabad, Pakistan April 3, 2022. Photos: Reuters

Faced with an imminent defeat in the no-confidence motion brought by a rainbow coalition of the opposition parties, Khan has resorted to a frontal assault on the constitution and democracy in the country.

A cricket superstar once, Khan has now opted for scorched-earth tactics in the most unsportsmanlike manner.

According to the Constitution of Pakistan, a prime minister against whom a no-confidence move has been formally initiated, ceases to have the power to dissolve the national assembly. But what Imran Khan did was no less than a political suicide attack on the constitution and the country’s parliamentary norms. He got the speaker and the deputy speaker to quash the no-confidence motion instead of putting it to vote on a conspiratorial pretext.

The deputy speaker, who was presiding over the session as the speaker too faced a no-confidence motion, declared – in the speaker’s name – that the opposition had brought about the move on behest of foreign powers and prorogued the session. They convolutedly invoked a constitutional clause, which states that loyalty to the state is the basic duty of every citizen, to smear the whole opposition as anti-state.

The opposition parties went on to conduct the session, under another house rule that allows a member from the panel of speakers to conduct the proceedings, and passed the resolution nonetheless, with overwhelming numbers.

Whether the resolution is binding or not, it clearly showed that Imran Khan had lost the majority in the house. But he then advised the President of Pakistan, Dr. Arif Alvi – another known minion of his – to dissolve the national assembly, which he did promptly, plunging the country into multiple constitutional crises of Himalayan proportions.

A military spokesman was swift to proclaim that the army had nothing to do with what had transpired. The Supreme Court of Pakistan (SCP) then stepped in and took cognisance of the happenings in the national assembly, the PM house, and the presidency, under the suo motu powers it carries. The court stopped short of a cease and desist directive but observed that all orders issued by the president and the prime minister are subject to its review and set the hearing by a larger bench for April 4.

Opposition parties, too, have petitioned the SCP to overturn the litany of illegal and unconstitutional orders.

Pakistan is no stranger to Bonapartist generals mounting coups d’état, but with a prime minister taking a wrecking ball to the whole edifice of democratic institutions and constitutionalism, the country is entering uncharted waters. The SCP taking up the matter is a move in the right direction albeit the superior judiciary has a mixed record, where it has given legal cover to putschists more often than not.

Also read: As Imran Khan Faces Confidence Vote, Here’s How Every Former Pakistan PM Was Shunted Out of Power

In a sole instance, when the SCP overturned the dismissal of then prime minister Nawaz Sharif and dissolution of the national assembly by the President Ghulam Ishaq Khan in May 1993, both had to step down weeks later in an army-dictated arrangement ending their standoff. 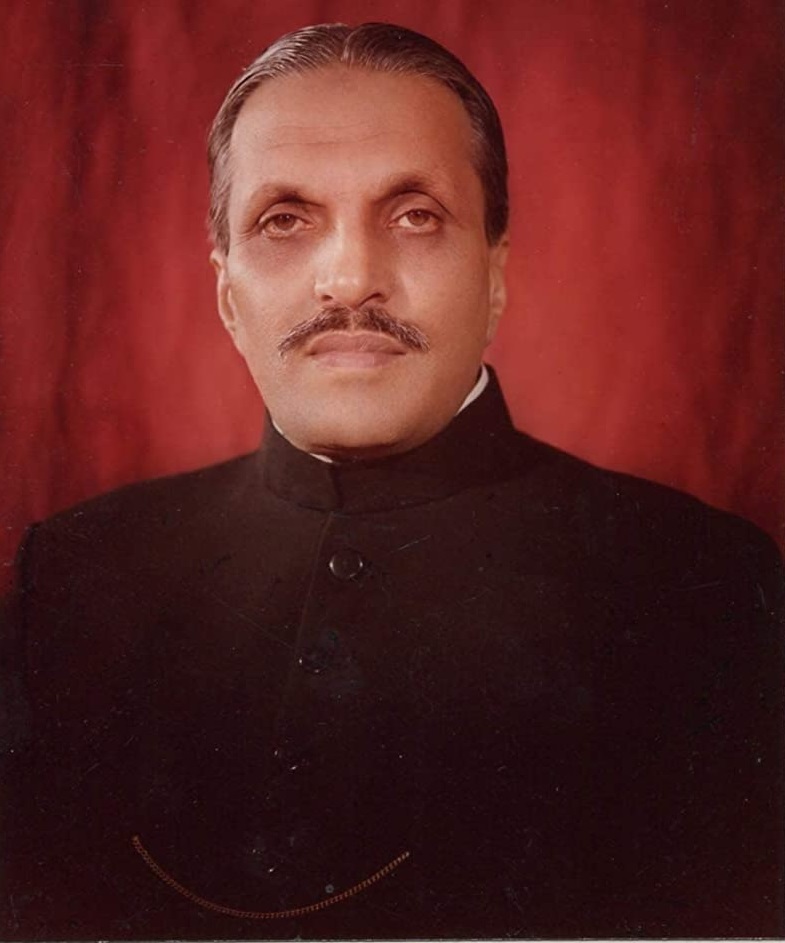 In another instance, the SCP had held the dissolution May 1988 of the national assembly by General Ziaul Haq illegal but did not restore the house. The case became known as Federation of Pakistan vs. Haji Saifullah and might actually be the template that the SCP follows in the current instance. General Ziaul Haq had dismissed the national assembly, which had been elected according to his own diktat on a non-party basis, on several flimsy grounds but the petitions challenging his actions were not filed until after he passed away in an air crash in August 1988.

The interim rulers and the army, then decided to go through with party-based elections slotted for November that year. The SCP ruled in October 1988 that the going ahead with the elections that would restore a multiparty system was in the “supreme national interest” and was the will of the people. While it declared the late general’s orders illegal, the court did not grant relief to restore the assemblies by relying on a British legal principle that the petitions were “barred by laches” i.e., failure to assert one’s rights in timely fashion.

While the opposition parties today have approached the SCP instantaneously, the talk of fresh elections has been in the air. State minister for information also declared that fresh elections would be held in 90 days.

The SCP might thus be inclined to perform a balancing act by declaring the president, prime minister, and the speaker and deputy speaker’s actions illegal, but it may not restore the status quo ante and direct the executive to go through with new elections. But things are both politically and constitutionally much different than they were in 1988.

Back then, the country was transitioning from an overt military dictatorship to multiparty democracy. On the other hand, if the court today does not declare the impugned actions null and void ab initio, it risks rolling the wheels back from a measly democracy to outright fascism.

Also, unlike the British courts, which have to contend with an unwritten constitution anchored in convention, the SCP has a very clearly written document to go by. And everything that happened on this fateful Sunday, flagrantly flies in the face of the letter and spirit of that written constitution.

But even if the court were to take a very lenient view of the extremely poisonous actions by Imran Khan and his cronies, they have set themselves up for a future dispensation prosecuting them for subversion of constitution and possibly high treason. Imran Khan, known for his dictatorial tendencies since cricketing days, has tried to poison the constitutional well. It is never easy to remove the mutations introduced into the polity by civilian or military adventurists, and also quite unpleasant to bring them to book. The rifts and frictions that such odious aberrations create among the organs of state and society at large, have a long-lasting disastrous impact.

Imran Khan, however, has not just sowed the seeds of discords at home; he has tried to chainsaw an already precarious US-Pakistan relationship. The disgraced prime minister has been using anti-US rhetoric to energise his base off and on for decades, but for the past couple of weeks it became particularly venomous.

Khan first insinuated that a foreign power was orchestrating his ouster, and then named the US in a nationally televised address, only to claim that he did it by accident. But after the illegal dissolution of the assembly, Khan named a US State Department official for threatening Pakistan if he were to remain in the office. Imran Khan used a probably hard-nosed conversation between the US official and the former Pakistani envoy to Washington, D.C., to get Pakistan’s National Security Committee (NSC), which includes the services chiefs as well, to express “grave concern” over the alleged threat.

He then used the NSC deliberations as the basis for the speaker or deputy speaker to allege – without an iota of evidence – that the opposition was in cahoots with external powers.

While the US has played it rather cool other than firmly denying making such threats, Imran Khan’s ostensibly estranged patron and the Chief of Army Staff, General Qamar Javed Bajwa took it upon himself to make amends. In his statement at a forum in Islamabad, General Bajwa not only highlighted the importance of cordial ties with the US and the best, but also called for end to the Russian invasion of Ukraine. But is it too little, too late? 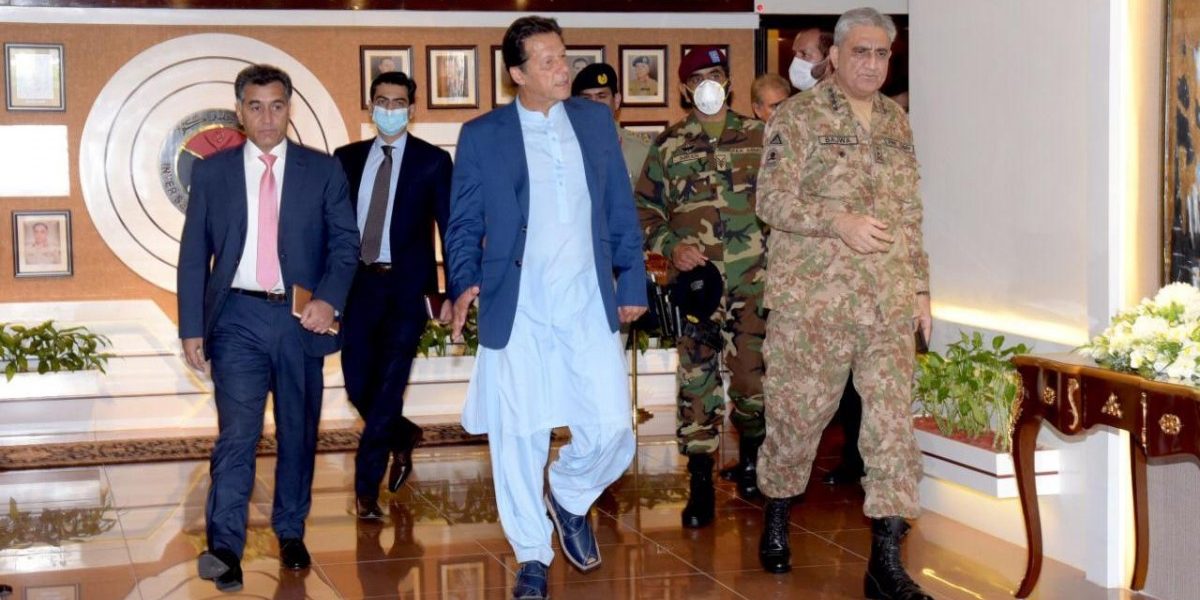 Installing Khan as its puppet prime minister had been the army’s longstanding project, fostered by several army and ISI chiefs. The brass had undermined a rather well-performing government of PM Nawaz Sharif and then stolen the 2018 elections for Imran Khan. The relationship soured last fall only when Imran Khan obstinately insisted on retaining Lieutenant General Faiz Hameed Chaudhry as the Director General of the ISI.

Prior to that, the army brass had tolerated Imran Khan’s thorough incompetence, terrible governance, and extreme mismanagement of the economy, without any qualms. He acted like the army’s spoiled brat and the brass was only too happy to let him. Just like the army had designed the jihadist contagion to attack only outside the country’s border, only to discover that some of the strains had boomeranged and could not be successfully decommissioned, the brass apparently is running into difficulties with controlled demolition of its Imran Khan project.

The army spokesman distancing the outfit from Imran Khan’s actions is fine and dandy but there is also a section, including in the opposition parties, which believes there’s a method to the sore loser’s madness. An opposition leader had gone on record to warn that a man sitting in Peshawar had been threatening their parliamentarians. It was a thinly-veiled reference to General Faiz who now commands the XI Corps headquartered in Peshawar.

With Imran Khan’s reckless attack on the constitution and law, these allegations pointing towards wheels within the wheels have regained currency, which by itself is an ominous prospect. But would the brass learn a lesson from its failed experiment? I wouldn’t hold my breath.

For now, all eyes are on the SCP, and whether it can redeem itself. And should it fail to do so, can the opposition parties rise to the occasion?

On April 4, a five-member bench of the SCP took up the national assembly dissolution issue. Chief Justice of Pakistan, Umar Ata Bandial, declined the opposition parties’ request to constitute a full bench to hear the very issue which could have repercussions for decades to come.

The CJP observed that court would issue a “reasonable order” in the matter. The hearing was adjourned till the next, leaving the country guessing for now.

Mohammad Taqi is a Pakistani-American columnist. He tweets at @mazdaki.