The Pakistan Democratic Movement has launched a three-phased anti-government movement under an "action plan" to oust the Khan-led Pakistan Tehreek-e-Insaaf (PTI) government.

Karachi:  Prime Minister Imran Khan is “incapable and clueless”, and his government is worse than a dictatorship, leaders of the Pakistan Democratic Movement (PDM), an alliance of 11 opposition parties, alleged at its second rally here.

The PDM, which was formed on September 20, 2020, has launched a three-phased anti-government movement under an “action plan” to oust the Khan-led Pakistan Tehreek-e-Insaaf (PTI) government.

Under the plan several rallies public meetings and demonstrations will be held across the country, before a “decisive long march” to Islamabad in January next year. The first of these rallies was held on Friday in Gujranwala near Lahore.

“This incapable and clueless prime minister will have to go home,” Pakistan Peoples Party (PPP) chief Bilawal Bhutto Zardari said at the Bagh-e-Jinnah, which was packed with people including supporters and workers of the alliance’s members.

History has proved that the biggest dictators could not survive and “what standing does this puppet have?”, Zardari said targeting Prime Minister Khan and added that “this is not a new fight but this will be a decisive fight”.

The rally here also marked the 13th anniversary of the twin blasts in Karsaz that targeted the homecoming procession of former prime minister Benazir Bhutto in 2007. The blast left around 200 people dead and several injured.

The PPP also invited Mohsin Dawar, who heads the Pashtun Tahaffuz Movement (PTM), to address the gathering at the Bagh-e-Jinnah.

“When answers are demanded, you say we are traitors,” said the PML-N vice president.

Also read: Pakistani Dissidents in the US Blame the Military for Country’s Multiple Crises

“So do not scare us (by declaring us) traitors,” the PML-N vice president said and added that “when you (Khan) are pressed for answers, you hide behind the armed forces”.

“You bring the army into disrepute. You use them (army) to hide your failures. Who gave you this right? she asked.

“We cannot respect those who violate their oaths. Is Nawaz Sharif wrong in saying that the army should not interfere in politics?” she said.

Sharif has accused the military and Pakistan’s intelligence agency ISI of being behind his ouster as premier and installing their “puppet government” by bringing Imran Khan into power.

He made the accusations while addressing the first power show of the alliance of opposition parties in Gujranwala via video link from London. 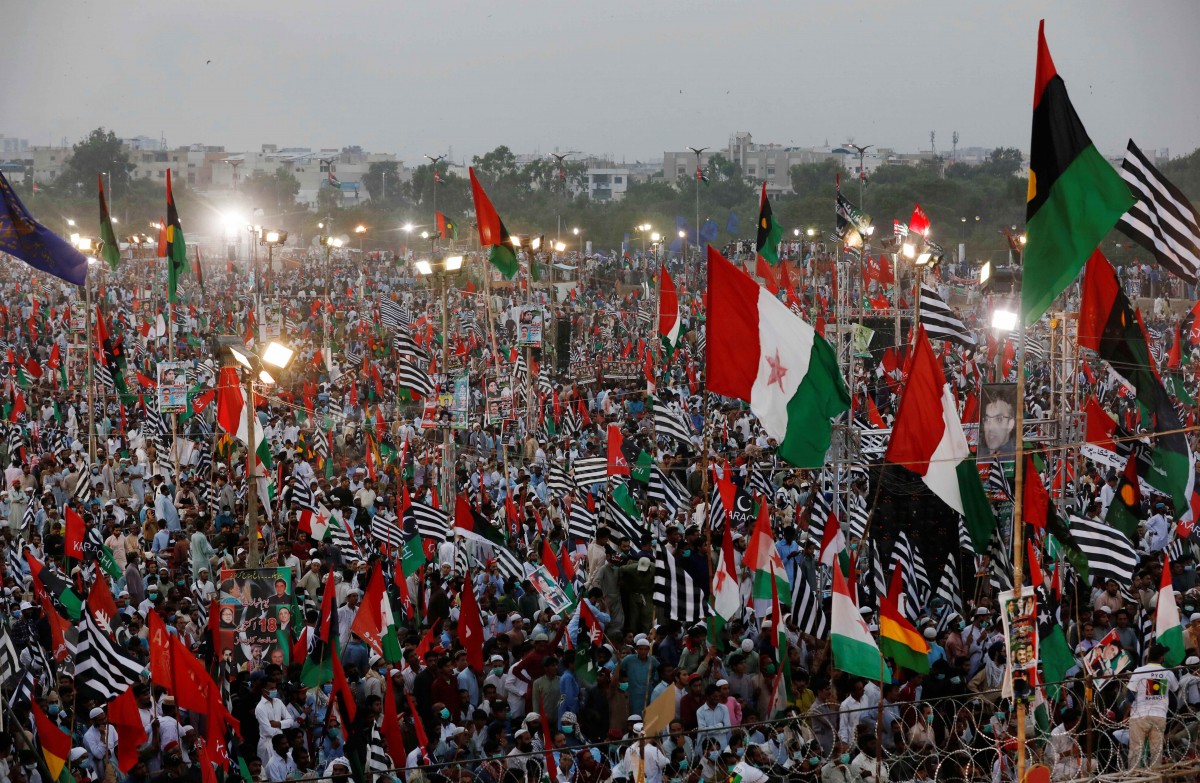 Supporters of Pakistan Democratic Movement (PDM), an alliance of political opposition parties, wave flags as they listen to their leaders during an anti-government protest rally in Karachi, Pakistan October 18, 2020. Photo: Reuters/Akhtar Soomro

Sharif, the 70-year-old leader of the PML-N who was ousted from power in 2017 by the apex court on graft charges, on Friday for the first time directly named army chief General Qamar Javed Bajwa and ISI head Lt. General Faiz Hameed for interfering in the elections of 2018 to ensure the victory of Khan.

Prime Minister Khan warned on Sunday he would be getting tough with the opposition and would ensure Sharif is brought back from London and put in jail for his deeds.

The Islamabad high court through newspaper advertisements has asked Sharif to appear before it by November 24, 2020, to avoid being declared a “proclaimed offender”.

Maryam Nawaz said Khan’s speech was of a defeated man who was worried about the support the PDM had gathered in a short time.

Bilawal, in his speech, lashed out at Khan for “betraying” the people of Pakistan and said the rise of “fascism” in the country had weakened Pakistan’s position on Kashmir and other issues.

Mohsin Dawar, who was one of the first speakers at the rally, termed the PDM as a “beginning for real democracy and civilian supremacy” in the country.

He criticised the incumbent government for filing “baseless cases” against political workers, whether they were from Waziristan, Gilgit Baltistan, Baluchistan or Sindh.

The cases, Dawar claimed, were filed due to political differences. The current regime is “worse than a dictatorship, he said.

“I consider this government to be worse than a dictatorship,” Dawar said.

Opposition leaders have announced that they would use all political and democratic options, including no-confidence motions and mass resignations from Parliament to seek “the selected” prime minister’s resignation.