Referring to the fractious relations between the neighbours, Ashrad Ghani noted that the “common objective” of the visit was to “take a leap of faith to overcome distrust”. 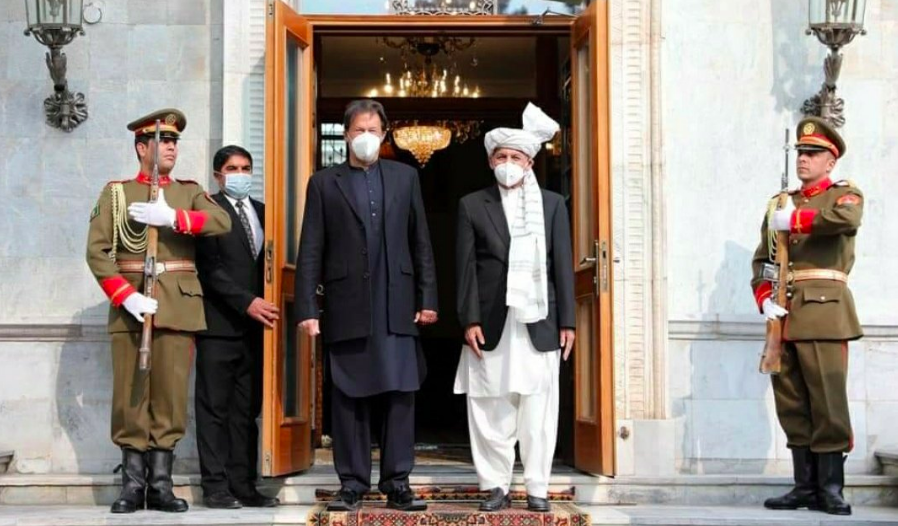 New Delhi: More two years after assuming office, Prime Minister Imran Khan visited Pakistan’s northern neighbour for the first time, with the focus firmly on the rising tide of violence in the country. Intra-Afghan talks have remained stalled for the last eight weeks.

At a joint press conference with Afghan President Ashraf Ghani, on Thursday in Kabul, Khan said, “My idea of choosing this time to come was to assure you that Pakistan will do everything, whatever is possible to help to reduce this violence and move toward ceasefire”.

He asserted that Pakistan “played a role” in getting the Taliban to speak with the Americans and then, join the intra-Afghan talks. “We notice with concern that despite the talks in Qatar, the level of violence was rising”.

He stated that one of the reasons Islamabad was ‘most interested’ in peace in Afghanistan is due to Pakistan’s tribal areas which were devastated by the ‘war on terror’. “Half of the population was internally displaced, their livelihood badly affected. Billions of rupees’ damage was done there. Best way we can help those people, people on both sides of the border, [is] if there is peace, trade and connectivity”.

His host, Ghani, said that Khan had come with a message, “Violence is not the answer to the current situation”. “The demand of Afghan people is a comprehensive ceasefire,” he added.

Referring to the fractious relations between the neighbours, Ghani noted that the “common objective” of the visit was to “take a leap of faith to overcome the distrust that has haunted our relationship”.

The Pakistan prime minister also echoed these remarks when he stated that the aim of his trip was to “to build trust, communicate more and assure that whenever you need help, we will be helping you beyond expectations”.

This year, there had been several instances of cross border firing between Afghan and Pakistan security forces.

Historically, Pakistan’s main strategic pre-occupation in Afghanistan has been to contain Indian influence. This was evident last week, when Pakistani military had announced it had new evidence of India’s alleged role in several terror attacks. Just five days before Khan’s important diplomatic trip, Pakistani military claimed that Indian diplomats based in Kabul were involved in financing and inspecting terror camps on Afghan soil and had also named an Afghan national as the main suspect for the attack on Peshawar Agricultural University in 2017.

Both Afghanistan and India issued strong denials of all the allegations. The Afghan foreign ministry had even pointed out that Pakistan should have raised any concerns through bilateral mechanism, especially since Khan’s visit was imminent.

While the Pakistan foreign ministry has issued a response to India’s denial, it has remained silent on Afghanistan.

Ghani announced that the two leaders had come “to an understanding that a shared vision regarding cooperation is not only essential for relations between Pakistan and Afghanistan, but a harbinger of regional cooperation and connectivity”.

He added that their common focus “is poverty eradication, empowerment of citizens of our countries within the frameworks of our Islamic constitutions”.

Khan’s visit is the first since he got elected in August 2018. The Afghan President has visited Islamabad several times – the last visit was in June 2019.

His trip has come amid an increase in violence this year. Afghanistan also faces the pandemic and began the much-awaited face-to-face talks in Qatar in September.

The quarterly report of the US Special Inspector General for Afghanistan Reconstruction (SIGAR) noted that the “average daily enemy-initiated attacks this quarter were 50% higher compared to last quarter”. Overall, such attacks were “above seasonal norms,” added the report.

Earlier this month, terrorists attacked Kabul University and killed at least 12 students. The Islamic State (IS) had claimed responsibility, but senior Afghan administration officials had continued to point fingers at the Taliban.

The situation is further complicated with the US military on Tuesday announcing that number of American troops in Afghanistan would be cut down by half to just 2,500 by January 15, only five days before Joe Biden is supposed to be sworn in as the next US President.

Also read: No Full Withdrawal Yet, Donald Trump to Sharply Reduce US Forces in Afghanistan

According to Wall Street Journal, top US military leaders had supported reducing the number of forces in Afghanistan early next year, provided a peace deal is signed between the Taliban and Afghan governments.

However, the intra-Afghan talks which were inaugurated on September 12 have not yet led to serious negotiations. The initial discussions were supposed to draw up the framework for negotiating the final peace deal between the representatives of the Afghan government and Taliban. While there were other procedural differences, the key issue that has stalled the talks is which Islamic school of jurisprudence should be used to resolve disputes based on religious texts.