It was no simple feat to get Sheikh Mujib's March 7, 1971 speech on the UNESCO List of Documentary Heritage. 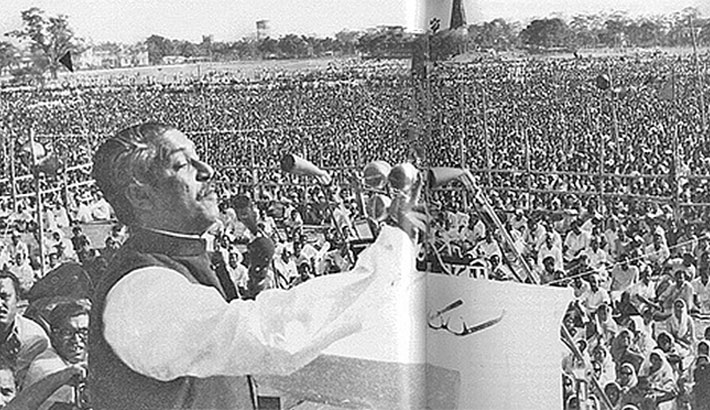 When M. Shahidul Islam, former Bangladeshi ambassador to France, first thought of inking a proposal for including Sheikh Mujibur Rahman’s historic March 7, 1971 speech in the UNESCO’s List of Documentary Heritage, he was – in a first – a tad unsure of himself.

It was April 2016 and Paris was in its late spring, with reddish brown leaves of cherry blossom ornamenting its streets and boulevards. The usual convivial mode of the Parisians enhances this time of the year.

But Islam was not in that mode. He was carefully charting his next move. Confidence has always been Islam’s forte, and by that time, he had already succeeded in getting included the Jamdani saree and the Mongol Shobhajatra in the UNESCO list of Intangible Cultural Heritage of Humanity.

So, he was no stranger to the rigorous process of documentation, fact checking and file preparation needed to include something in the UNESCO’s list. Islam was Bangladesh’s permanent representative to UNESCO headquarters in Paris – an incumbency that usually comes with the responsibility of being the country’s envoy to France.

“It’s not like the other proposals. It’s a sensitive issue to place the proposal of making the March 7 speech a documentary heritage to the UNESCO because, if somehow the proposal get refused, then it will hurt the sentiments of Bangladesh because here we are talking about the father of the nation,” said Islam.

He, after completing a successful tenure of five years in France, had been made the secretary-general of the Bay of Bengal Initiative of Multisectoral Technical and Economic Cooperation (BIMSTEC) in February last year.

As the headquarters of the BIMSTEC are located in Dhaka, Islam is now based in the Bangladeshi capital. Last week, he gave this reporter an exclusive interview at his Gulshan Residence.

An idea was born

The three entrances in UNESCO’s World Heritage Site list were the Historic Mosque City of Bagerhaat, the ruins of Buddhist vihara in Paharpur and the Sundarbans. The three entrants in the UNESCO list of Intangible Cultural Heritage of Humanity were the Mangal Shobhajatra on Pahela Baishakh, the traditional art of Jamdani weaving and Baul music.

“But there was none in the List of Documentary Heritage. So I thought of placing a proposal for two: one for Bangabandhu’s historic March 7 speech and the other for Chorjapod – the old mystical collection of poems. The idea of proposing the name of Chorjapod died in the early stages because the original manuscript of Chorjapod is in Nepal, not in Bangladesh. So I planned to move ahead with March 7 speech,” said Islam.

The main problem that he faced was that there was no original written manuscript of Sheikh Mujib’s speech. Several people, including veteran politician Tofael Ahmed, confirmed that Mujib – a great orator – didn’t deliver that speech in Race Course Maidan based on any written script; instead, he delivered it extempore.

“For preparing a proposal file to include something in UNESCO’s List of Documentary Heritage, you need to have original elements signifying the importance of the historical event that unfolded,” said Islam.

In April 2016, Monjur Hossain, secretary of the Bangladesh National Commission for UNESCO, came to Paris. There, he informed Islam that Mofidul Hoque – one of the trustees of the Liberation War Museum – once prepared an elaborate paper on the March 7 speech to present at a seminar in Cambodia. Hoque prepared that paper basing on an audio recording of the speech on a 45 RPM record.

Also read: UNESCO Heritage Tag for Mumbai’s Architecture Is One Thing, Preserving It Is Another

That 45 RPM record of Mujib’s speech was made by M.A. Khair – a member of the provincial assembly and owner of Dacca Record. The recording of the speech came out as a 45 RPM record on March 17, 1971 – just ten days after the speech had been delivered. That record was in the personal custody of M.A. Khair before it was donated to the Liberation War Museum in 1996.

“I mailed Hoque and he immediately replied with the paper that he prepared. In the meantime, I mailed UNESCO secretariat, asking them whether it accepts audio-visual elements or not. UNESCO replied positively,” said Islam.

After that, Islam went through Hoque’s paper and found it to be comprehensive and, most importantly, suitable for including in the proposal file. “But by that time, we have extensively conducted research works on the previous accepted proposals files of the UNESCO documentary heritage list and we felt that we needed additional documents to make our case strong.”

Islam then contacted Liakot Ali Khan, who works in Bangladesh’s information ministry. “I sent a questionnaire asking him whether he can get us any other relevant supporting documents or not. Ali gave me an excellent reply containing all the necessary information.”

Khan informed Islam that the March 7 speech was first supposed to be broadcasted live by Radio Pakistan’s Dhaka station. The station had all the facilities ready but the military regime, at the last moment, did not allow a live broadcast of the speech and put ban on its recoding.

Despite the ban, Naser Ahmed Chowdhury, a Bengali programme organiser of the Dhaka station, tape-recorded the speech in full. In protest of the cancellation of the live broadcast, all Bengali staff on the station left their work and threatened to stop regular radio broadcasts indefinitely. Finally, the Pakistani administration had to relent. It allowed the broadcast on the following day, March 8.

“Khan informed me that original tape is preserved by Bangladesh Radio in a controlled climatic condition,” said Islam.

Khan also informed Islam of another important fact. Mohibur Rahman Khoyer, chief of the film division of what was then East Pakistan, had arranged a video recording of the entire speech. Upon learning this, Islam arranged to collect Khoyer’s recording.

“We have gathered all those elements and, after a considerable amount of research documentation basing all of those, we finally prepared the proposal and submitted it to the UNESCO committee on April 30, 2016,” said Islam.

After the submission, it was scrutinised in three steps. Firstly, the UNESCO secretariat ascertained whether the file that Bangladesh submitted was technically sound or not. After deciding that it was, the proposal file was sent to a registered subcommittee, which judged the file for historical significance.

“In February 2017, we received a letter stating that they found the speech of great historical significance. But they suggested making some minor changes in the file before placing that in the international advisory committee. We made those changes and finally, on April 17, 2017, we submitted our final file,” Islam recalled.

On October 30, 2017, the hard labour paid dividends. The director-general of UNESCO, Irina Bokova, revealed in Paris that the body had recognised Sheikh Mujibur Rahman’s March 7 speech as part of the world’s documentary heritage.

“I am considering this as one my greatest successes in my career. I believe the inclusion of the March 7 speech has indeed enriched UNESCO’s documentary heritage list,” said Islam.