An unregulated marble processing locality is adversely affecting the health of local residents and children in the neighbourhood while the workers have little to no medical coverage to deal with the long term harmful effects of the industry. 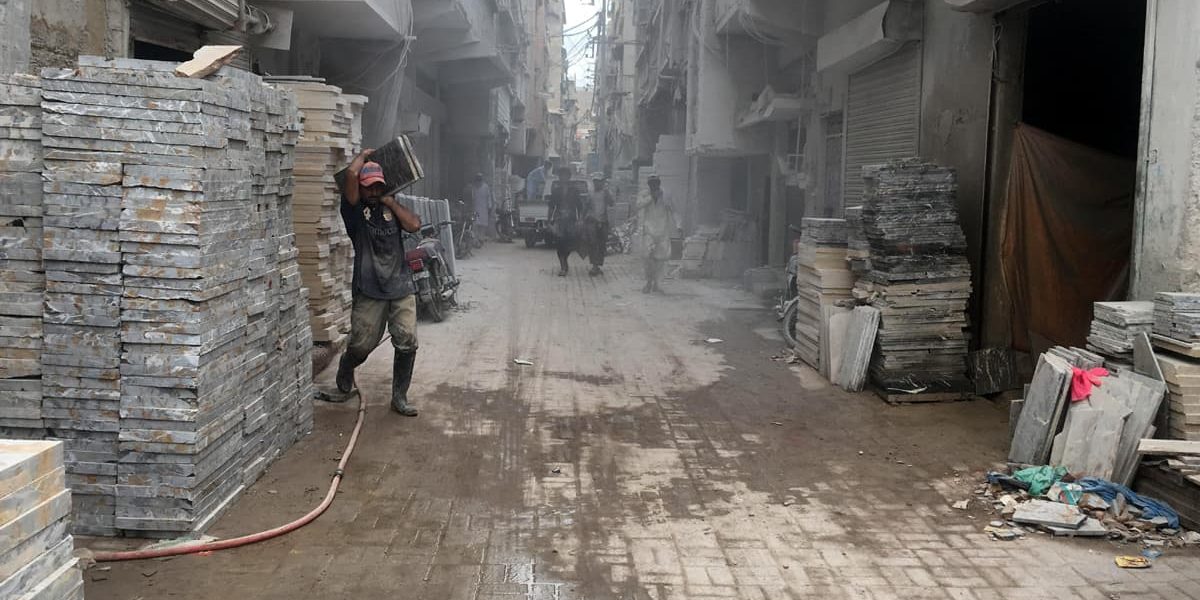 Karachi: A powdery white dust covers everything in a working-class locality on Karachi’s Manghopir Road. It clings to window panes, mixes with food being prepared and sold on the street and coats fixtures and furniture inside homes and other buildings. The noise is also deafening in this part of the city. Electric saws screech, cutters and grinders whirr and sanding machines hiss as fine particles of marble stone being processed at hundreds of workshops here fly and deposit themselves everywhere.

Government Crescent Grammar Boys Secondary School, located in a neighbourhood known as Modern Colony, is drowned in both dust and din – its desks and chairs covered with a thick film of the processed marble’s residue. Even if regularly swept away, according to teachers in the school, it gathers again within ten minutes.

Students are unable to focus on their studies, complains a senior teacher, and, being exposed to marble dust, they suffer from various diseases. When a toothpaste manufacturer conducted their medical check-up recently, she says, most of them were found to be suffering from throat infection.

The management of several educational institutions in the neighbourhood have requested workshop owners to cease their operations during school hours. But long breaks will make these small businesses unviable, says Syed Muhammad Tasleem, who runs a workshop and a showroom of marble artefacts right across the school.

He lives next to his own business concern and realises the health and hygiene problems it is creating. “But what can we do?” he says. “This is our source of income.”

Marble – a strong but fancy stone used in construction, furniture, sculpture and decorative pieces – is cut, grinded, finished and polished into various objects and artefacts at hundreds of small workshops scattered in many low-income neighbourhoods between Old Golimar area on the southern edge of a sewerage disposal plant, known as Gutter Baghicha, and Pak Colony neighbourhood, a few kilometres to the north on Manghopir Road.

The workshops, usually situated on the ground floor of residential buildings in narrow, densely populated streets, hum incessantly and kick up a continual dust storm. If and when their owners and local residents sweep away the dust, they end up dumping it in nearby empty lots, along local roads and, worse still, in the bed of the drying Lyari river that passes nearby. The wind eventually brings most of it back to their neighbourhoods.

Imran Saeed, a 34-year-old resident of Modern Colony, uses medication and inhalers routinely to alleviate his chronic breathing difficulties. “Doctors attribute my illness to the inhalation of marble dust,” he says.

Saeed’s four-year-old son and five-year-old daughter suffer from nose and eye allergies. His wife has also been complaining of shortness of breath for the last couple of years, he says, though she faces no breathing problems whenever she is staying with her parents in another city.

Talha Siraj, another resident of Modern Colony, says his 16-month-old son has to be frequently nebulised. Otherwise, he says, the baby’s pulmonary system gets choked. Such complaints are common throughout the marble processing localities.

Those who work at workshops are even more vulnerable to diseases. “My entire family suffers from shortness of breath,” says the proprietor of a marble processing unit.

Dr Lubna Hafeez Siddiqui, who has been practising medicine in one of these neighbourhoods for the last 11 years, has carried out some surveys locally. Her findings indicate that 70-80% of the local population suffers from respiratory diseases. Inhaling marble dust, according to Siddiqui, can also cause eye and nose allergies among children. It can create kidney-related problems too.

Dr Sohail Akhtar, a senior pulmonologist who works at Karachi’s Indus Hospital, explains marble dust contains particles of calcium carbonate and silica. The exposure to the latter causes silicosis – a lung disease also known as grinder’s asthma. “Possible symptoms of this disease are intense coughing, shortness of breath, chest pain, fever, night sweats and respiratory failure,” Akhtar says and adds that people suffering from silicosis are at an increased risk of contracting tuberculosis.

Doctors often advise local residents to leave the area for the sake of their own health but that is not as easy as it may sound. “Even if I sell my house, I will have to arrange a lot of additional money to buy a new one elsewhere and that is absolutely impossible for me,” says Imran Saeed.

Some local residents have tried to get the workshops closed down because they operate in clear and flagrant violation of environmental laws and urban zoning regulations.

Khalid A. Khalil, a doctor who once lived in a marble processing locality, moved the government and succeeded in having some processing units shut down in 1986. “But they resumed their operations after two or three months with support from some politicians,” he says. “I then left the area.”

A few families that specialised in sculpture and stone carving migrated to Karachi in 1947 from the Indian state of Rajasthan. They settled down in Pak Colony and Modern Colony when these neighbourhoods first emerged in the 1950s. Some years later, they set up a handful of marble processing workshops which soon ballooned into many hundreds as people from other communities also joined the trade, says Abdul Rahim, a local marble trader.

Today, there are 380 workshops and showrooms on main Manghopir Raod and another 190 tucked inside various neighbourhoods, says Syed Mohammad Adnan, general secretary of the All Karachi Marble Industries Association. Around 2,850 workers are associated with these businesses, he says. Each of these workers, according to him, takes home 14,000 rupees to 19,000 rupees a month.

Marble is brought into Pak Colony and its adjoining localities, mostly in the form of slabs, from Peshawar, Mardan and Abbottabad. These slabs are cut with electric saws which have inbuilt water sprinklers to keep marble dust from flying off into the atmosphere. The problem starts with smaller cutters, grinders and other finishing tools that are operated without using water and, thus, produce the dust storm.

There are also around 350 large marble factories along the northwestern part of Manghopir Road that cut huge marble boulders into slabs. Their raw material is usually brought into Karachi from various parts of Balochistan.

These factories use heavy sawing machinery, including vertical saws, bridge saws and gang saws. Each of these saws, according to Sanaullah Khan, chairman of the All Pakistan Marble Mining Processing Industry and Exporters Association, has the capacity to process up to 25 tonnes of marble in 24 hours. Each factory employees around 25 labourers, he says.

Also Read: The Corruption Case That Undid the Sharif Family

The industrial scale saws at these factories use water sprinklers while cutting marble rocks. Each factory has a large overground tank that can contain as much as 30,000 gallons of water which is used multiple times until it assumes the form of a thick sludge that can no longer be pumped from the tank onto the saws.

The problem arises when the sludge is disposed of.

Factory owners outsource the task to tanker operators who charge 3,000 rupees for every tanker of sludge they dispose of, says Adnan. “There are reports that they often dump the sludge near residential areas,” he adds.

The sludge is often found dumped on empty lots and next to rainwater drains all along Manghopir Road. As it becomes dry, it starts disintegrating and soon assumes a powdery form that, in turn, is blown into the atmosphere by the wind.

Muhammad Farhan, a labourer in his early forties, manufactures chess sets in a workshop in a neighbourhood called Wilayatabad. Two other labourers work alongside him. Each of them spends around eight hours in their workshop every day – enough time to manufacture two to three chess sets.

On a September day, Farhan is clad in a t-shirt and dress pants and his head is covered by a P-cap. His bare arms are coated with white marble dust as are his clothes. His colleagues, both dressed in shalwar kameez, are similarly enclosed in marble dust.

None of the three workers is wearing a mask, using goggles or putting on a noise muffler to protect his face, eyes and ears. Even when workshop owners provide them with protective gear – such as plastic aprons, gloves and long boots – they do not use them. Some of them wrap their cotton handkerchiefs around their nose and mouth to protect themselves from dust. Most others are not bothered about taking any precautions at all.

Also Read: The Changing Life of the Wakhi People in Pakistan’s Shimshal

Their workshop is a congested single-room establishment that has only one source of ventilation – a small door that opens onto a narrow street. A large part of the marble dust produced inside the workshop, thus, stays indoors. This exposes the workers to a much greater amount of stone dust than what those living close by have to endure.

The workers also get no medical coverage, no compensation for injuries and no paid leaves. Since they have no control over their working conditions, they often ignore their negative impacts. “I have been working in this field for the last 18 years but have never experienced any medical problems,” says Farhan, smiling. He may be deluding himself.

Jameel Ahmad, 31, who has been working in marble processing workshops for 15 years, is similarly blithe about his health. Yet he looks too old for his age. When asked about his hair that have turned grey prematurely, he says this is because he has been suffering from a cold for years.

Both Farhan and Ahmad say they consume gur – or jaggery – every night before they go to sleep. They believe that gur has the ability to wash off all the dust they have consumed during the day.

Monitoring and preventing environmental problems caused by industrial and commercial activities in Karachi come under the purview of the Sindh Environmental Protection Agency (SEPA). The very existence of highly polluted work environments of marble processing workshops and factories and the deplorable disposal of their waste show that the department has failed to do its job. Cases were filed against 27 factory owners that led to the imposition of a fine of 7,000 rupees on each of them, says a SEPA official. “They were also ordered to get the sludge disposed of through certified contractors,” he says.

That the regulations are inadequate and their implementation lax is shown by the tiny number of cases filed against delinquent factory owners and the minuscule fine imposed on them.

As far as the safety of workers is concerned, the Sindh labour department has done little to ensure that. A joint director of the department argues this is due to the fact that workshops that employ less than 10 workers do not come under the Sindh Factories Act, 2015 – the main legal tool that the government can use to monitor and regulate work environment at industrial concerns.

This, he expects, will change soon as another law, the Sindh Occupational Safety and Health Act, 2017, has been put in place to address issues not covered by the earlier legislation. “Under the new act, the department will gradually take action against those who violate its provisions,” he says, but does not specify when that action will start and what kind of shape it will take.

Out on a street in a marble processing neighbourhood, meanwhile, dust continues to fly around. An old food vendor, who sells buns and fried potatoes, is trying in vain to protect his wares from the hazardous waste. He has asked workshop owners multiple times to do something about it but they say it is not their fault. It is the wind that is to be blamed for the problem, they respond.

The solution for the residents of marble processing localities seems to be simple: stop the wind; the pollution will go away.

This article was originally published in the Herald’s October 2018 issue.