How a Cross-Border Workshop With Over 60 Indian, Pakistani Journalists in Nepal Broke Barriers

Journalists at the week-long workshop discussed issues around cross-border stories and how the relations – or lack thereof – and climate changes affect these areas. 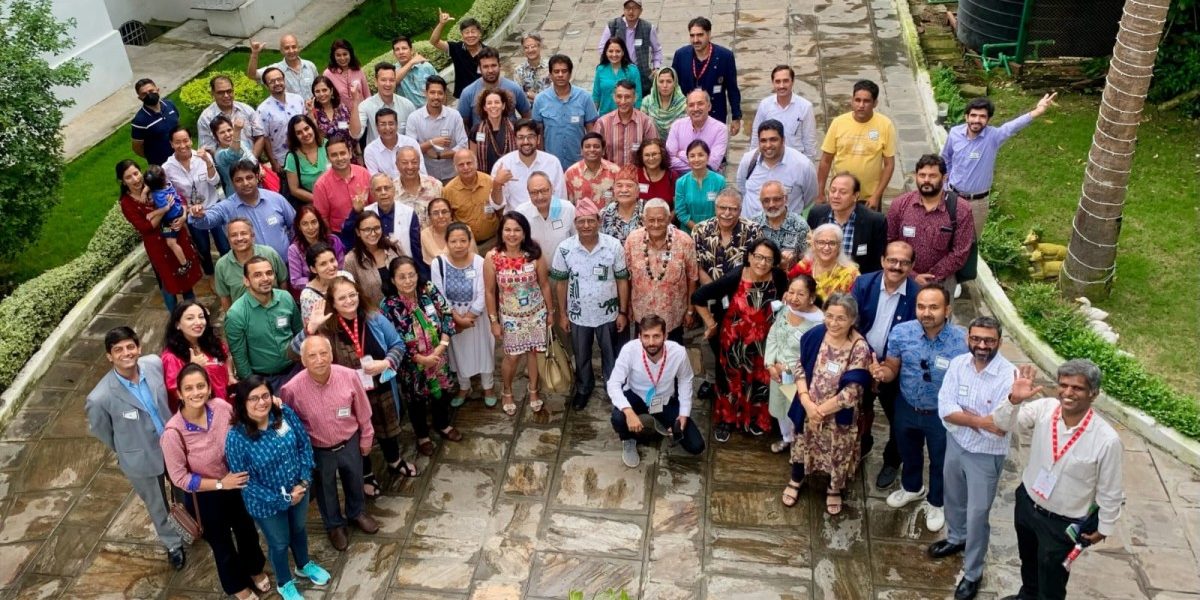 A photo of the East-West Center Alumni, past and present. Credit: author provided

The convoluted journey from Karachi to Kathmandu I undertook recently brought me to a week-long cross-border reporting workshop with 66 journalists from India and Pakistan. This was perhaps the largest such exercise in a long time. Maybe ever.

In a world of virtual interactions, and particularly, in a pandemic-hit world, in-person meetings are rare. Pandemic or no pandemic, for Pakistanis and Indians to meet each other is even rarer.

“If nothing else, to think 60-plus journalists from both countries coming together in itself was a cause célèbre,” award-winning investigative journalist Dilrukshi Handunnetti, a trainer from Sri Lanka, told Sapan News later.

Our interactions at the East West Centre’s cross-border project ‘Reporting on Cross-Border Issues of Mutual Concern’ highlighted the need for such meetings. The Hawaii-based public non-profit organisation has been conducting media programmes between India and Pakistan since 2015. It has over 300 media alumni, including Handunnetti, who heads the Centre for Investigative Reporting in Colombo.

A direct Karachi-Kathmandu flight takes under three hours. But there are no such flights anymore. Pakistanis can’t fly to Nepal via India due to visa issues. So over 30 Pakistani journalists had to travel via the Middle East or Turkey – first flying west, then doubling back east. For most of us, the journey took an average of 8-10 hours each way.

Our colleagues flying in from India made it in 45-90 minutes.

Excessive travel times aside, it was exciting to meet those with whom we had been interacting virtually for over two years since our East-West fellowships began in early 2020. Since then, we have collaborated and forged links while working on stories, interacting through Zoom and WhatsApp.

It was surreal to see the familiarity that had developed, reflected in how participants greeted each other. And yet, given the size of the group, there were also security concerns. Social media posts had to be taken down in order to protect each other from accusations of being traitors or ‘collaborating with the enemy’.

Overall, though, it was “a great experience”, as freelancer Rabia Umaima Ahmed from Lahore put it.

Journalists from both countries need to meet more – this was the general agreement. We need to do this to stop enabling an environment of hate.

Over a cup of tea or a meal, the stories are very different. Journalists from both countries understand that radicalisation, extremism and violence at home or across the border are dangerous not only for each other but also for internal politics and overall society. Indian and Pakistan journalists with their instructors in Nepal. Photo: author provided

On the first day, the instructors had to put in some effort to break up the in-person reunions taking place over breakfast to move us into the sessions.

There was a positivity in the air as we found counterparts from the other side and organically formed four focus groups to work in – health, environment, economy and trade, agriculture and water management – for collaborative stories to be completed by December this year.

The devastating floods in Pakistan were discussed in all the groups. The Indian journalists were deeply concerned, keenly aware that this is not an isolated situation. It will affect the whole region.

Discussions over the week ranged from issues around cross-border social and human rights stories and digital startups launched by women entrepreneurs, to environment, agriculture and trade, and how the relations, or lack thereof, and climate changes affect these areas.

“It was inspiring to see these supposed enemies working together as professional journalists while simultaneously developing friendships in the process. After collaborating with these peace-builders, it’s hard to not be optimistic about the future in South Asia,” commented Steven Youngblood, founding director, Centre for Global Peace Journalism, Park University, Parkville, Missouri.

When Pakistanis and Indians meet, their similarities often make them forget that they are from different countries. Even contentious issues like Kashmir can be discussed civilly. Participants from the area felt that their region is mostly ignored and the media does not report on what is actually happening there.

“In the end, it will not be the speeches or training that will make the biggest and most lasting impact,” as Randall Smith, a business journalist teaching at the Missouri School of Journalism and one of the instructors heading the economy and trade group, told Sapan News later.

“The most important legacy of the gathering is the lifelong relationships formed by journalists from Pakistan and India. Those relationships will translate into fact-based reporting on issues important to the future of both countries.”

Good journalism is particularly essential in a world wrestling with the complexities of climate, health, trade and food security, he added.

Also read: How to Beat Fake News? ‘Vaccination’ Could Be the Answer

Dilrukshi Handunnetti, who has covered civil war in her country, conducted a session on ‘Cross-border Investigative Reporting in an Age of Misinformation’. Misinformation is not only dangerous during times of conflict but also in peace time. She stressed the importance of people-to-people communication and connections and how journalists can help build peace.

“The hostile relations between India and Pakistan prevent people-to-people connectivity. To build understanding and identify mutual concerns and the vast possibilities for both nation states, journalists from both countries should have opportunities to connect and collaborate. In fact, it contributes to strengthening ties within the South Asian community,” she said.

“Narrative sharing and exploring new narratives through joint collaboration” by journalists from around India and Pakistan will show what’s possible to achieve when reporting together, she said. It will also highlight the challenges journalists need to overcome when working together.

Steve Rice, professor emeritus at the Missouri School of Journalism, in his plenary session talked about the importance of incorporating multimedia in cross-border projects and integrating text with multimedia and social media.

The keynote was by acclaimed Nepali journalist Kanak Mani Dixit, founder Himal Southasian magazine and cofounder Himal Media, Kathmandu, talking about the ‘Importance and challenges of cross-border media collaboration in the region’.

His older brother Kunda Dixit, editor and publisher, Nepali Times, Kathmandu, moderated a session on the Importance and Challenges of Cross-Border Media Collaboration in South Asia. Peace journalism, he said, includes proactive reporting that helps humanize “the other” and gives voice to everyday people.

He talked about a project he worked on, later compiled into a book titled A People War: Images of the Nepal Conflict 1996-2006. Two sequels take the idea forward with photographs and stories of those who faced war and conflict in Nepal. The session highlighted the role of journalists during and after conflicts and war, and how to tell these stories.

In another plenary session, Steven Youngblood, founding director, Centre for Global Peace Journalism, Park University, Parkville, Missouri, talked about ‘Peace Journalism in Nepal and South Asia’. Among the ideas that came up was covering similar stories and highlighting solutions from one country to find solutions in the other.

Sessions and activities included field trips for participants of all four groups, visiting sites relevant to their areas of interest.

Independent journalist Priyadarshini Sen from New Delhi was in the environment group that visited a recycling plant and met with workers there.

The overall workshop, she said, exposed her to many ideas, connections, multimedia skills, and peace-building methodologies that reaffirmed her belief in going beyond the tried-and-tested to work for a more peaceful and inclusive subcontinent.

“In a world where prejudices, bigotry, and pettiness are tearing people apart, programmes like these hold the possibility of building freer and more loving connections,” she said.

Umaima was part of the health group that visited Khokhana Vision Centre and Kirtipur Hospital in Kathmandu. The visit, she said, was a reminder of the state of healthcare in our region and the problems doctors and staff face to provide basic healthcare to the people.

The Vision Centre is set up in the heart of an indigenous community, Nirvari, in the Khokana area, at a small village about eight kilometers south of Kathmandu. The Vision Centre organises eye camps in various areas, including schools for regular checkups, and provides basic treatment. Serious cases go to the Nepal Eye Hospital in the capital, paying a minimum amount for checkups and surgical procedures. 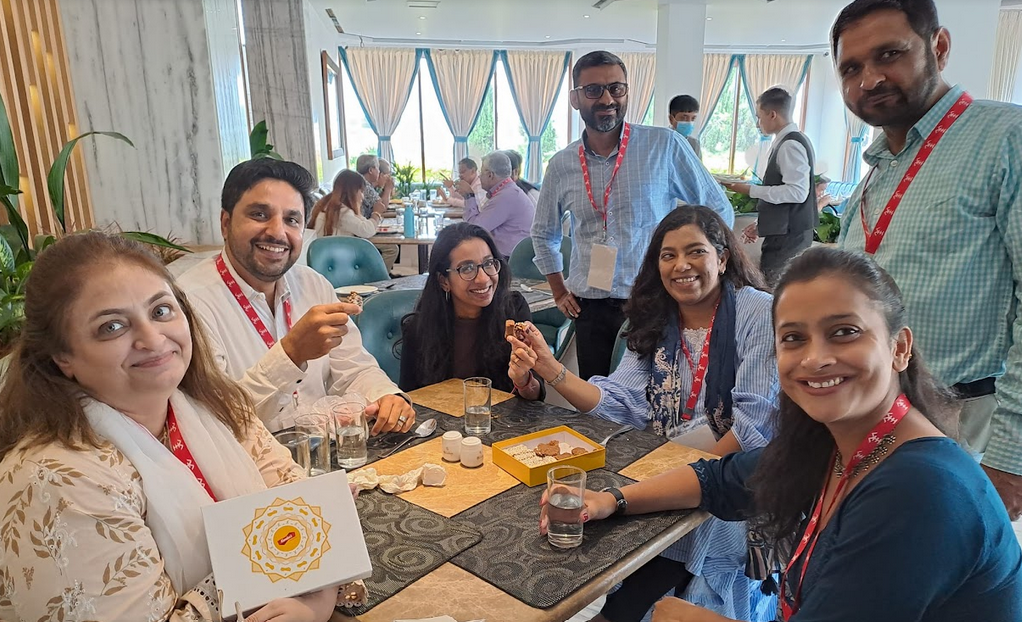 Indian and Pakistani journalists sharing sweets with each other at the workshop. Photo: author provided

“It was truly a great experience and exposure,” said George Kallivayalill, associate editor and chief of bureau, Deepika newspaper, New Delhi, who was part of the agriculture group. “The best thing about this workshop was getting to know more about our neighbours and the feeling of togetherness.” It gave him hope for “a bright peaceful future for the next generations in both countries.”

The week gave Sai Manish, a business journalist in New Delhi in the economy group, “a better understanding of cross-border issues, fresh perspectives, knowledge of new journalistic tools,” and most importantly, “a sense of joy at having met fantastic colleagues and forging good personal and professional bonds.”

As Kunda Dixit said, “It’s wonderful seeing journalists from both sides together in Kathmandu as if there were no sides. Makes you recall John Lennon singing, Imagine there’s no countries…”

It is time to break down the barriers and allow peace to make a path through the region.

The writer is a freelance journalist based in Karachi. She is gender coordinator – Pakistan for the International Federation of Journalists, vice-president of Karachi Union of Journalists, a member of IFJ’s Gender Council, and East West Center Fellow 2022.

This article was originally published on Sapan News Network.