Prime Minister Narendra Modi has envisaged the satellite as a 'gift' to increase regional cooperation outside the SAARC framework using India's status as a space power. 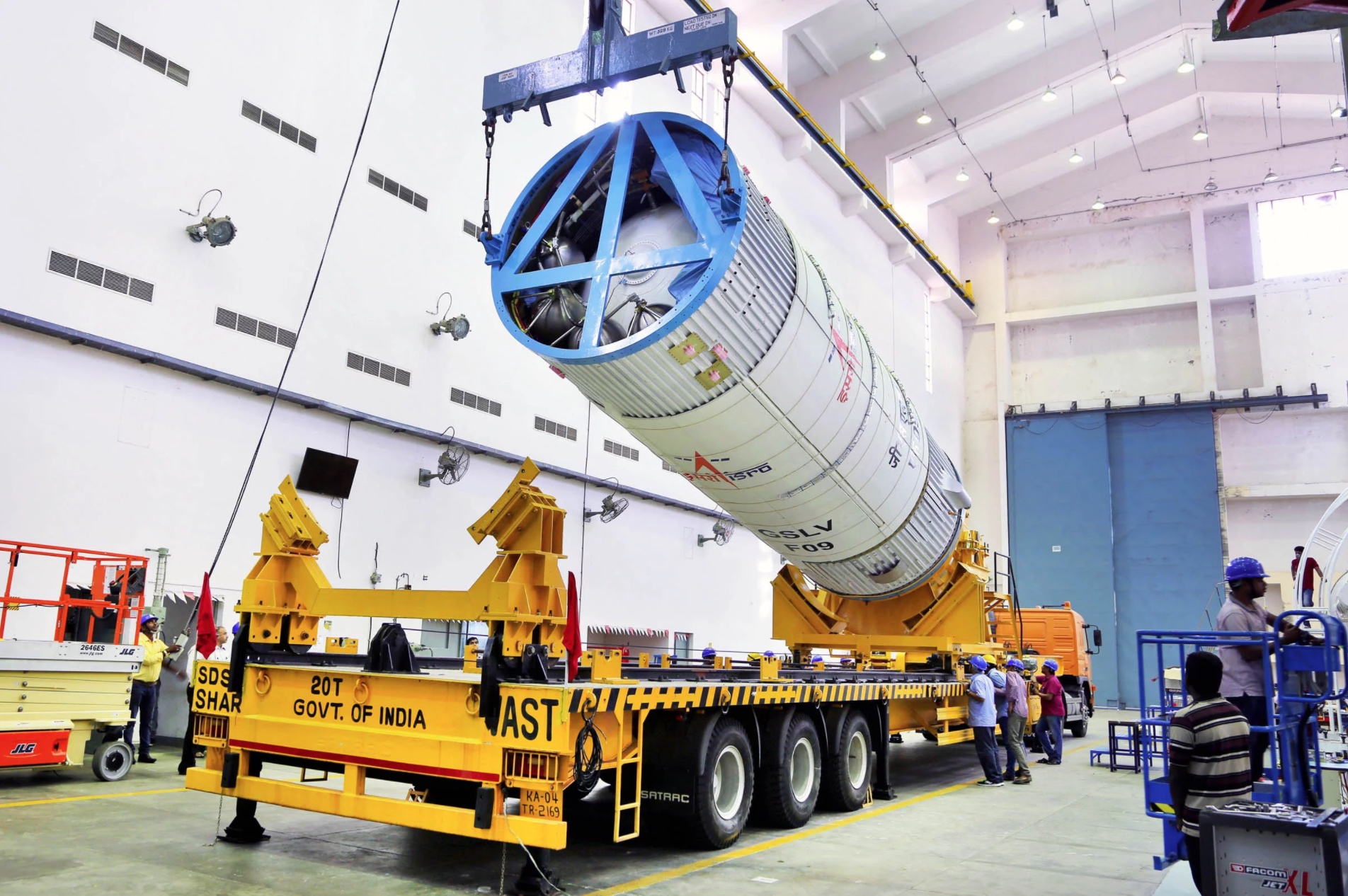 The second stage of the GSLV F09 during vehicle integration. The rocket will place the South Asia Satellite in a geosynchronous orbit at 48º E. Credit: ISRO

Update, May 5: In a break from tradition, ISRO will not be live-casting the launch event, scheduled to happen around 5 pm on May 5, nor will there be any media presence at the launch site. The Hindu‘s Prasad Ravindranath also reported on his blog that ISRO scientists had been prohibited from speaking about the launch until after its success had been confirmed.

This article will be updated as and when more details become available.

May 1: On May 5, the Indian Space Research Organisation (ISRO) will attempt to launch the GSLV F09 mission. It will be the ninth flight of the Geosynchronous Satellite Launch Vehicle (GSLV), and the fourth consecutive with the indigenous cryogenic engine powering the upper stage. The rocket will be carrying the GSAT-9 communications satellite and an electric propulsion system.

GSAT-9 will be strategically more important than the other GSATs because it is the one called the South Asia Satellite. The idea behind the satellite was mooted by Prime Minister Narendra Modi in June 2014 after talks with SAARC country leaders right after his swearing-in ceremony a month earlier. However, the scientists and engineers at ISRO prefer calling it GSAT-9.

The South Asia Satellite is part of Modi’s ‘Neighbourhood First’ policy focusing on India’s South Asian neighbours. It has been called the ‘Satellite for SAARC’ earlier and the ‘SAARC Satellite’ before that. The name was changed after Pakistan backed out of the project and Afghanistan and Bangladesh also seemed ambivalent.

A satellite named for SAARC would have had to be developed through the understaffed SAARC secretariat. India opposed this for fear of delays as well as to retain full control over the satellite.

Pakistan was wary of India being able to eavesdrop on its strategic communications. So officials had suggested Pakistan use GSAT-9 exclusively for civilian communications while India agreed that countries would be able to autonomously control their ground stations. However, Pakistan has remained reluctant.

Afghanistan wanted more transponders than planned because it had recently leased a satellite from Eutelsat – and which it was going to place in the same longitude as GSAT-9. Incidentally, though Nepal is on board, it also has plans to acquire two communications satellites of its own.

Bangladesh had been worried about a clash in frequency allocations with its impending Bangabandhu 1 communications satellite. But it signed up for the South Asia Satellite shortly ahead of Prime Minister Sheikh Hasina’s visit to India in March 2017. Sri Lanka also signed up after India agreed to not prevent it from launching its own communications satellite in the future.

GSAT-9 will carry 12 Ku-band transponders and have a planned mission life of 12 years. It will weigh 2,230 kg and have a payload power of 2,300 W at the time of launch. Only the GSLV Mk-II can lift this mass to the geosynchronous orbit. ISRO’s other launcher, the Polar Satellite Launch Vehicle (PSLV), can’t lift more than about 1,400 kg to the same orbit. The satellite will be placed at the 48º E longitude.

Each participating country will be able to use a dedicated transponder, in the 36-54 MHz range, as it wishes. These countries are Bangladesh, Bhutan, Nepal, Maldives and Sri Lanka – apart from India. They will only have to pay for their ground stations; all other costs will be borne by India. GSAT-9 itself has cost about Rs 250 crore to build, while ISRO has projected the 12-year enterprise to cost around Rs 9,600 crore. According to ISRO, GSAT-9 will enhance direct-to-home services, inter-state disaster management, telemedicine, knowledge-sharing, etc. in the region.

Modi has envisaged the South Asia Satellite as a ‘gift’ to India’s neighbourhood, to increase regional cooperation outside the SAARC framework using its status as a space power. This is reminiscent of how Vikram Sarabhai catapulted India into modernity using space technologies. India has done a notable job of integrating the possibilities of space with its developmental goals. And if Modi’s vision for the region is truly of cooperation over domination, then his government can leverage ISRO’s capabilities to achieve more.

For example, India can also share the know-how and knowledge from its Indian Regional Navigation Satellite System (IRNSS), the GPS-Aided GEO-Augmented Navigation (GaGAN) networks and the CartoSat imaging satellites with its neighbours (in a way that doesn’t compromise its own strategic interests). Since these apparatuses are already operational, India may not incur additional hardware costs.

Finally, before we forget: the electric propulsion system. ISRO is experimenting with this system as a satellite station-keeping measure. This means the system will be responsible for adjusting the South Asia Satellite’s position while it is in orbit. This saves it from carrying a certain amount of fuel and allows it to carry a heavier payload. The system can provide 75 milli-newtons of thrust.