In a ruling earlier this year, the Pakistan Supreme Court allowed Islamabad to amend a 2018 administrative order to conduct general elections in the region. 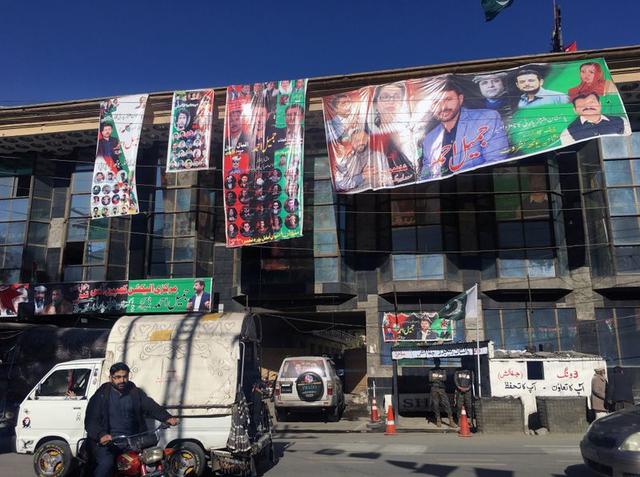 Election campaign banners of different political parties are seen on a building ahead of the legislative assembly elections in the city of Gilgit, Gilgit Baltistan, November 8, 2020. Photo: Reuters/Umar Farooq

Islamabad: Wearing face masks and observing social distancing to stop the spread of COVID-19, the people of Gilgit-Baltistan in northern Pakistan voted on Sunday in the third legislative assembly election amidst tight security.

The voting started at 8 am and ended at 5 pm. The voters present inside the polling stations would be allowed to cast ballots even after the end of polling time, polling officials said.

There were 24 seats for the contest but polling on one seat was postponed, leaving 23 seats up for grabs. As many as 330 candidates, including four women, are in the contest, they said.

India has slammed Pakistan for its decision to hold election in Gilgit-Baltistan and said any action to alter the status of the militarily-occupied region has no legal basis. “Any action by Pakistan to alter the status of the militarily-occupied so-called ‘Gilgit-Baltistan’ has no legal basis whatsoever and is totally void ab-initio,” said Spokesperson Anurag Srivastava  from the Ministry of External Affairs (MEA) at a virtual media briefing in September.

“Our position has always been clear and consistent. The entire territories of the UTs of Jammu and Kashmir and Ladakh have been and are an integral part of India and would remain so,” Srivastava had said. It is the third election for the current legislative assembly after political reform introduced in 2010.

A fierce triangular contest involving Pakistan Muslim League-Nawaz (PML-N), Pakistan Peoples Party (PPP) and Pakistan Tehreel-i-Insaf (PTI) has been predicted by experts. Traditionally, the party ruling in Islamabad has won the Gilgit-Baltistan polls. The first election was won by the PPP when it got 15 seats, followed by PML-N, the then ruling party in 2015 when it won 16 seats.

The PPP has fielded 23 candidates, while the PML-N has 21 aspirants. Both parties are contesting solo while the PTI has made a seat adjustment on two constituencies with Majlis-i-Wahdatul Muslimeen, a Shiite party. Shiite Muslims have a big presence in the region.

Lately Tehreek-i-Nifaz-i-Fiqh-i-Jafria, another Shiite party, announced its support for the PPP in the elections but there were no seat arrangements. This has boosted the PPP’s prospects.

The ruling PTI, of Prime Minister Imran Khan, was initially considered as a favourite, but PPP chief Bilawal Bhutto Zardari and PML-N leader Maryam Nawaz actively campaigned in the region with several well-attended rallies. Their extensive campaign has left the outcome as open-ended.

However, a recent survey by the Gallup Pakistan group showed that the PTI was in a strong position to win the polls, followed by the PPP. The central issue is granting the status of a province to the region. Prime Minister Khan, during the height of the campaign, personally visited and announced interim provincial status.

PPP chief, Bilawal Zardari, announced to give the full status of the province if his party won, with seats for Gilgit-Baltistan in Parliament of Pakistan. Maryam also promised to grant the status of a province by saying that it was her party that set up a special committee in 2015 led by then advisor on foreign affairs Sartaj Aziz to propose reform for the region, including elevating its status to a province.

Regardless of who wins the polls, it is expected that some changes in the status of the region would be announced after the new government was formed in the region.

In a ruling earlier this year, the Pakistan Supreme Court allowed Islamabad to amend a 2018 administrative order to conduct general elections in the region. The Gilgit-Baltistan Order of 2018 provided for administrative changes, including authorising the prime minister of Pakistan to legislate on an array of subjects. Following the verdict, India issued a demarche to a senior Pakistani diplomat here and lodged a strong protest over the apex court ruling.

India also clearly conveyed to Pakistan that the entire Union territories of Jammu, Kashmir and Ladakh, including the areas of Gilgit and Baltistan, are an integral part of the country.

The polls in Gilgit-Baltistan were to be held on August 18, but Pakistan’s election commission on July 11 postponed them due to the coronavirus pandemic. The five-year term of the previous assembly had ended on June 24, bringing an end to the five-year rule of the Pakistan Muslim League-Nawaz (PML-N).