By holding elections in the region, the Pakistan government seems inclined to make it a fifth province. However, people's desires for autonomy and development are still unheard. 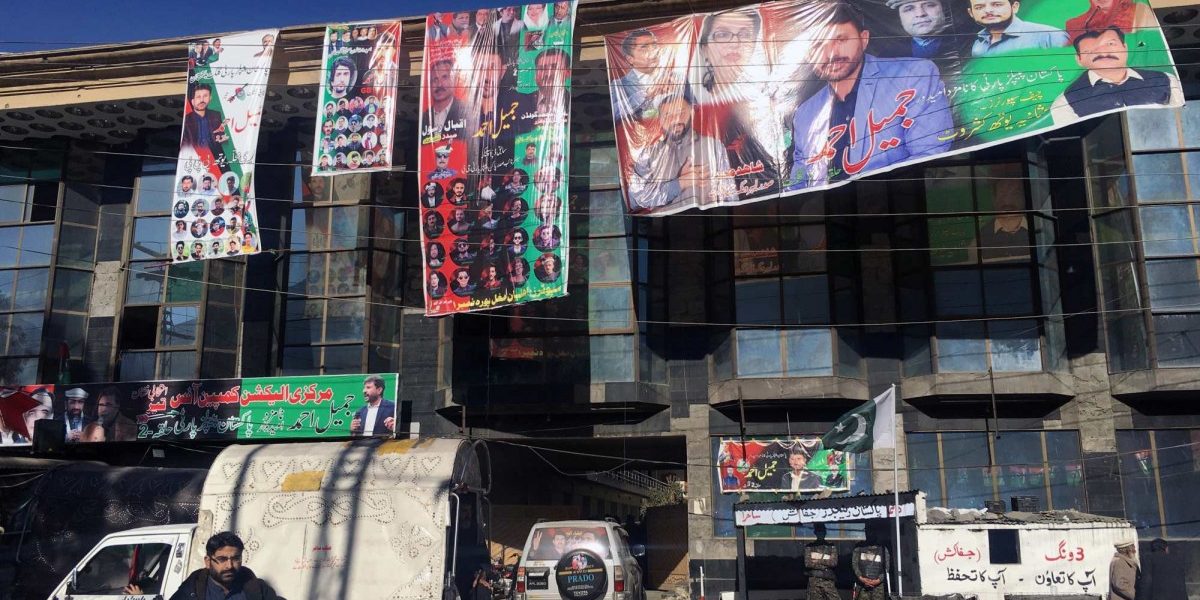 Election campaign banners of different political parties are seen on a building ahead of the legislative assembly elections in the city of Gilgit, Gilgit Baltistan, Pakistan, November 8, 2020. Photo: Reuters/Umar Farooq

With unequal sovereignty accorded to Pakistan-occupied Kashmir (PoK) and within it especially so to Gilgit Baltistan (GB), the region finds itself in a state of constitutional limbo.

The constitution of Pakistan does not refer to either GB or Aazad Jammu & Kashmir (AJK) as part of the state’s territory, yet the Survey of Pakistan depicts GB as Pakistani territory. Political leaders in Shia-dominated GB have demanded that either the area be integrated as Pakistan’s fifth province or be considered for actual autonomy. And a minority demands that GB becomes a part of AJK. But the Pakistani state has responded to these demands with nominal reforms.

On November 15, 2020, elections were held in 23 of the 24 constituencies of GB. There is speculation that with the holding of elections, Imran Khan government intends to integrate occupied GB into Pakistan, making it the fifth province. This stems from statements made by Pakistani minister of Kashmir and Gilgit-Baltistan Affairs’ Ali Amin Gandapur, who was quoted as stating that Khan’s government has decided to “elevate Gilgit-Baltistan to the status of a full-fledged province with all constitutional rights, including its representation in the Senate and the National Assembly.” India has “rejected” Pakistan’s proposal to upgrade GB’s status to a provisional province, slamming the polls as farcical and aimed at hiding Pakistan’s illegal occupation of its territory.

The current election round was the region’s third since reforms established a legislative assembly in GB with very limited legislative powers. The Pakistan People’s Party (PPP) won the first elections held in 2009, followed by the Pakistan Muslim League-Nawaz (PML-N) in 2015. Earlier this year, when the PML-N government completed its five-year term, the government appointed former deputy inspector general of police (DIG) Mir Afzal, as the caretaker chief minister for GB.

The third Gilgit-Baltistan Legislative Assembly (GBLA) will have 33 members. The seven districts which held election for 23 of the 24 constituencies are Gilgit, Hunza-Naga, Skardu, Astore, Diamir, Ghizer and Ghanche. With six constituencies, Skardu has the largest representation. Six seats are reserved for women and three for technocrats and other professional members.

Unusual delays in vote counting caused large-scale protests across GB, with allegations of vote-rigging and accusations by candidates that the local election commission has delayed and manipulated the results. With five of the six victorious independent candidates joining the Pakistan Tehreek-e-Insaf (PTI), Imran Khan’s party is all set to form the government. P

PP chairman Bilawal Bhutto Zardari alleges large-scale poll rigging, “We will tell the people that the slogan of Vote per daaka namanzoor is gaining momentum in GB.” PML-N vice-president Maryam Nawaz claimed PTI won the seats through ‘rigging’, ‘bullying’ and with the help of turncoats. Rigging accusations compelled vote recounts for certain constituencies. There are reports that paramilitary reinforcements have had to be called in after protesters took to the streets in Gilgit.

The GBLA first came unto effect on September 9, 2009, when then President Asif Ali Zardari signed the Gilgit-Baltistan (Empowerment and Self-Governance) Order. The order officially changed the name of the so-called ‘Northern Areas’ to GB and provided for a 33-member legislative assembly with an elected chief minister. The assembly was prohibited from discussing any matters relating to foreign affairs, defence, internal security and fiscal plans of the government of Pakistan and the conduct of the any judge of the Gilgit-Baltistan Supreme Appellate Court, with powers to make laws on 61 subjects. The act also constituted a GB Supreme Appellate Court, to be the region’s highest Court of Appeal.

Covering an estimated 72,971 square km, GB celebrates its independence from Kashmir’s ruling Dogra family on November 1, after a mutiny in the Maharaja’s forces, and Pakistan has had control over GB since 1948. Previously called the Federally Administered Northern Areas (FANA), GB was separated from AJK in 1970 and never had any kind of self-governance. While people of the region aspired to have legislative powers in tune with other provinces of Pakistan, its administration has always been separate.

The first significant step towards political empowerment of the region was the promulgation of the ‘Gilgit Baltistan (GB) Empowerment and Self-Governance Order of 2009’ which provided for a Legislative Assembly. But the subsequent GB order promulgated by Imran Khan’s government on May 21, 2018, withdrew whatever “negligible powers” that had been delegated to the region under the 2009 order. The order imparted more power to the prime minister, giving him final authority on legislation.

Severely criticised by rights groups, this act which was designed to deprive the people of GB of their basic constitutional and political rights was dubbed as the ‘GB Emperor Order’ on social media. The order states, “The Prime Minister shall have the powers to adopt an amendment in the existing laws or any new law in force.” As the administrative head of Pakistan, the prime minister does not have the power to legislate, nor does he enjoy any such power in the other four provinces. Considering that the people of GB don’t have any representation in Pakistan’s federal legislature or any say in choosing the prime minister, this extension of his role is fundamentally ultra-constitutional.

A UN Security Council resolution recognises GB as part of the disputed territory. Yet Pakistan has proceeded with the China-Pakistan Economic Corridor (CPEC) and promises GB’s people great economic returns from the corridor, which covers almost 600 square km in that territory. The GB orders are meant to side-step any demand for self-determination by the people of the region; with hardly any powers to legislate on key issues. The GB order of 2018 is in no manner a genuine compromise. All real powers over all legislative affairs were given to the GB Council in Islamabad, headed by the prime minister of Pakistan. This too was further restrained by the 2018 order, by which the powers of the GB Council too were taken away and it was assigned merely an advisory role.

Although two decades passed since the locals of GB filed a petition in Pakistan Supreme Court, drawing attention to the region’s political marginalisation, it was only in 2015, when India raised objections to the CPEC passing through PoK, that the then PML-N led government formed a committee headed by then National Security Advisor Sartaj Aziz in 2015 to look into GB’s constitutional future. The region’s “disputed” categorisation has acted as a trigger for the current regime to impel the Supreme Court’s January 2019 judgement explicitly restoring the GB order of 2018, which was suspended by the GB Supreme Appellate Court. The judgement has paved the way for increased control by Islamabad over GB administration by increasing the quota of Pakistani civil servants to be posted there and even the judges of GB’s apex court are to be drawn from among the retired judges in Pakistan.

By holding elections in GB, Pakistan is trying to strengthen its claim on the region without addressing the region’s demand for self-determination. If it is to be a fifth province of Pakistan, will it be treated at par with the other provinces, and if not does Pakistan accept that it remains a “disputed province”? The jurisdiction of the GB courts remains limited to the region, restricting their authority. This leaves cases involving violations of the fundamental rights of the GB people unchecked. Schedule IV and the Anti-Terrorism Act are used to crush civil dissent by arresting people and censoring them if they express their political views.

This year in his address to the people on November 1, Imran Khan spoke about the beauty of GB’s majestic mountains and its awe-inspiring landscape, amidst criticism from the opposition and Indian Prime Minister Narendra Modi. In his narrative, Khan purposely sidestepped addressing real issues and the lack of political liberties plaguing the people of GB. His government’s narrative attempts to proffer the CPEC as the remedy for all that troubles GB, without any corresponding political development.

The timing for this assertion over GB and interest in declaring it as a fifth province, conjoins with the Chinese CPEC whose starting point is the region. The disputed legal status of the region is a bane for both Pakistan and China in effecting the CPEC.

As a stakeholder to the Kashmir conflict, Prime Minister of Pakistan-administered Kashmir, Raja Farooq Haider, feels that merger of Gilgit-Baltistan with Pakistan as its province will frustrate the Kashmiri struggle for self-determination. Former Pakistani ambassador Abdul Basit recently tweeted a cautionary advice to Khan’s government, “My advice to Islamabad – think hard on GB. A step taken in reaction to what India did to IOK will engender avoidable controversies. Don’t stir up hornet’s nest and weaken Pakistan’s principled position on dispute.”

Both the Indian and Pakistani governments had assented to the text of the UN Security Council resolutions on Kashmir, which has been endorsed repeatedly by the Council and by successive UN representatives. For India, the Pakistani demilitarisation of the occupied territory is the precondition for the implementation of the UN resolution.

Although the decision to integrate GB as Pakistan’s fifth province has been announced, much ambiguity remains regarding its future. If it is “disputed”, is it subject to any future plebiscites, and if it is a fifth province, is its constitutional status at par with the rest of Pakistan?

Vaishali Basu Sharma has worked as a consultant with the National Security Council Secretariat (NSCS) for several years, and is presently associated with the New Delhi based think tank Policy Perspectives Foundation.