Two demonstrations involving Indians and Pakistanis in Massachusetts once again foregrounded the common issues that the people of the two countries face. 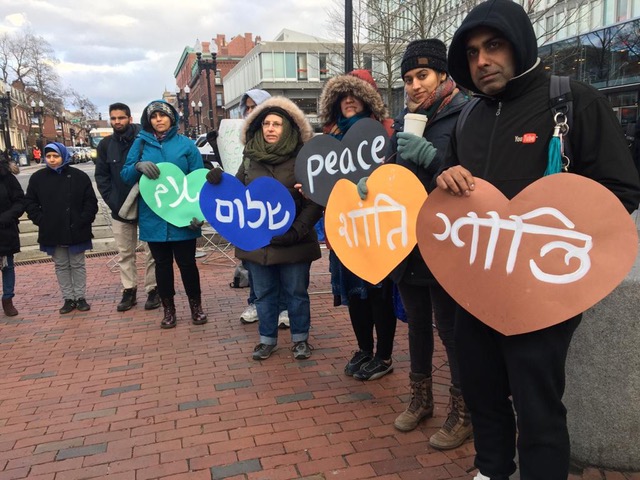 The round red brick pit at Harvard Square in Cambridge, Massachusetts, is a favourite venue for street musicians, meet-ups, and demonstrations. Two recent demonstrations there involved Indians and Pakistanis, on February 29 and March 8 respectively, shortly before the coronavirus scare limited public gatherings.

The Indian demonstration was a multi-faith prayer and a protest against the violence in Delhi targeted against Indian Muslims. The Pakistani one was in solidarity with the women’s demonstrations, Aurat March, held in cities around Pakistan for International Women’s Day.

Having just returned from Pakistan, I attended both demonstrations. Winter still eclipsed spring. In below freezing air dissecting gloves, boots, hats and coats, people stood their ground doggedly with placards calling for peace and justice.

“Dravidians against Brahmanism” read a placard at the first event. Other placards proclaimed the word “peace” in different languages including Urdu, Hindi, Bangla, Hebrew.

I wrote ‘Mubarak ho, larki hai’ (Congratulations, it’s a girl) on my placard, a slogan used by a young woman and her husband at the Islamabad Aurat March. She has been putting off getting pregnant because she’s an athlete. The couple held up this placard celebrating a daughter’s birth in a society that pressurises women to start families but doesn’t rejoice if the baby is a girl.

Another mantra, ‘Dil mein beti, will mein beti’ (daughter in heart, daughter in the will) sounded good so I added that to my placard too. Then drew a clenched fist with bangles and came up with this slogan: ‘ChooriyaN hain, beri nahi’ (they’re bangles, not shackles). A familiar taunt flung at men perceived to be behaving in a ‘feminine way is ‘Chooriyan pehni hain?’ (wearing bangles?) 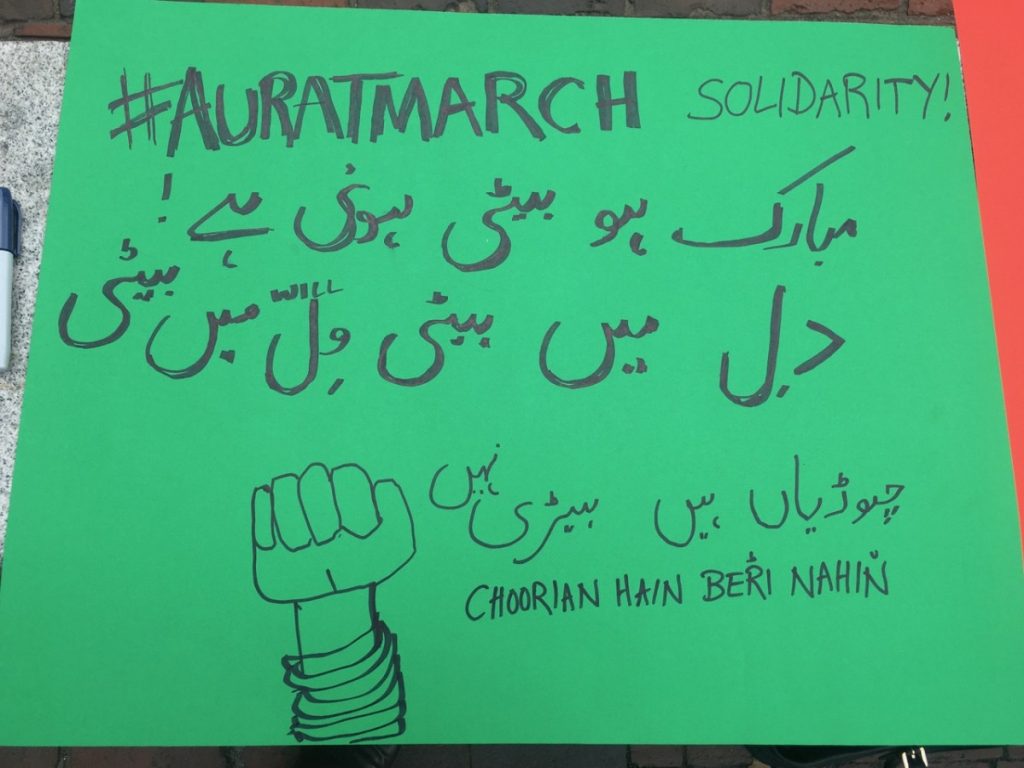 At the Indian event, I was one of the few Pakistanis, standing in solidarity with activists fighting the menace of retrogressive forces in India. Pakistanis have been fighting the mirror images of these forces for the past three decades or more. Yet many on either side prefer to point fingers across the border, looking away from oppression at home. It’s a matter of degrees, at different times.

The rights movements are inclusive, for and by people of different faiths, professions, ethnicities, genders, and socio-economic classes. In a broader sense, they counter injustice, oppression and fascism in various guises.

In India, rights activists stand not just for Muslims but also Dalits, Kashmiris, and other oppressed communities. One activist, born a South Indian Hindu, posts a countdown of the days since the Kashmir lockdown to WhatsApp groups and Facebook pages. He does this on a daily basis despite “warnings” (the platforms are now accessible to people in Kashmir). A couple of years ago, he got a little girl in Kerala to sing Pakistan’s national anthem, and a little girl in Lahore to sing India’s national anthem. How subversive can you get?

In Cambridge, two women at the February 29 demonstration recite the powerful poem ‘Sab Yaad Rakha Jayega’ (Everything Will Be Remembered). Aarti Sethi and Rajita Menon are not Muslim but they passionately owned the words written by the Indian Muslim poet Aamir Aziz after the mob violence against Jawaharlal Nehru University students in January 2020.

Hypernationalists in India call rights activists traitors and “Pakistan-lovers” (that’s a bad thing?). There is similar propaganda against rights activists in Pakistan, including the Aurat March organisers.

Controversial the slogan may be, but it was visible at Aurat Marches in several cities around Pakistan. The cheeky rallying cry recently inspired a rap song by the Chitrali-origin singer FiFi.

This defiance through music, humour and peaceful collective action is up against the status quo everywhere, including patriarchal systems of injustice and hypernationalist, militarist narratives. The upholders of these narratives like to point fingers at the ‘other’ while ignoring excesses and injustices at home.

And now they are in denial about the coronavirus outbreak. Whatever their religion, each claims their faith gives them immunity from the illness.

Lol. We have our version, you have yours. At the end of the day they’re the same. Science–deniers, misogynists, racist, homophobic, anti-democracy. Did I miss out anything?

The coronavirus doesn’t discriminate between religion, gender or other divisions. It has brought home a universal truth: Human beings are created equal. It is the power elites and the power structures they create that oppress. At the end of the day, it is this Goliath of oppression that the Davids of the world are up against.