According to a Mizoram police official, at least 2,223 Myanmar nationals have crossed the border and are currently taking shelter in different parts of the state. 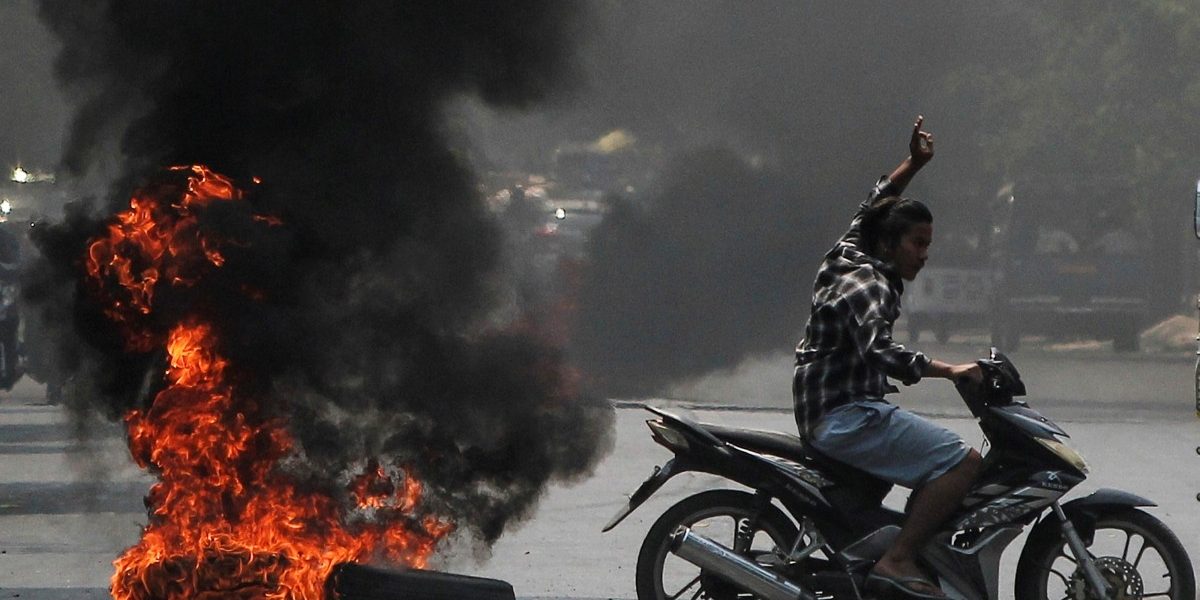 A man flashes the three-finger salute as he passes burning tires during a protest against the military coup, in Mandalay, Myanmar April 1, 2021. Photo: Reuters/Stringer

New Delhi: Two and half months after the military coup and crackdown on protests, over 2,200 Myanmar nationals have so far fled into India, including 14 elected members of parliament belonging to Aung San Suu Kyi’s National League of Democracy.

On February 1, the Myanmar military, known as Tatmadaw, declared a state of emergency and arrested all elected leaders, including State Councillor Suu Kyi and President Win Myint. The Tatmadaw had refused to accept the November 2020 general elections results, in which NLD won a majority of the seats.

Since the coup, protests and civil boycotts have spread across the country. The military responded with a crackdown which has left over 700 people dead so far.

The crisis in Myanmar spilled over its border, with refugees fleeing into Thailand and India.

According to a Mizoram police official, at least 2,223 Myanmar nationals have crossed the border and are currently taking shelter in different parts of the state, PTI reported on Tuesday.

This number includes 14 members of parliament who won on an NLD ticket in the November 2020 elections. These lawmakers are from Myanmar’s provinces of Chin and Sagaing.

About 80% of Myanmar nationals who have fled into India are police personnel, while the rest are government employees, the police official told PTI.

Local volunteer groups have been helping the refugees by providing them shelters and food. Several village communities have also contributed to the care of the Myanmar nationals.

Out of the nine districts where Myanmar nationals have taken refuge, the larges number are in Champhai, followed by Siaha. Most of these districts share a 510-kilometre long border with Myanmar. “There are 310 Myanmar natives in the state capital Aizawl,” the police official stated.

Myanmar media reported that the military had raided the town of Tamu, which lies on the border with India, with accounts stating that a seven-year-old girl was shot by allegedly shot by soldiers.

The presence of Myanmar nationals has led to friction between the Central and state governments.

Mizoram government had been earlier forced to withdraw its guidelines on providing shelter to those coming to Myanmar, following the Union home ministry’s intervention.

Mizoram chief minister Zoramthanga, however, has expressed his support for the democratically elected government in Myanmar. He even held a video meeting with Myanmar’s ‘Foreign Minister’ Zin Mar Aung, who is the member of a ‘cabinet’ appointed by the government-in-exile, made of National League for Democracy lawmakers who were ousted in the February 1 military coup.

Meanwhile, North East Students Organisation (NESO), an umbrella body of various student organisations in the Northeast, has urged the Central government to pressurise the Myanmar military to stop the crackdown inside the country. It also urged the Centre to seek immediate restoration of democracy.

It demanded that the Centre help refugees who are entering the north-eastern states. “The NESO decided to urge the Central Government of India with the consent of state governments of Mizoram, Manipur, Nagaland and Arunachal Pradesh to properly address the plight of the Myanmarese nationals who are seeking shelter in these four states,” the student’s body said in a statement, as quoted by PTI.

The Indian government has officially “condemned the violence” and mourned the “loss of lives”. However, it has not specifically named the Myanmar military as the perpetrator of the violence.

Following the coup, India had expressed “deep concern” at the situation and reiterated its support for the “democratic transition”. However, New Delhi remains opposed to Western countries’ sanctions strategy, asserting that “greater engagement, not less” is required with the military junta to resolve the crisis.

India had been among eight countries that had attended the annual Myanmar armed forces day parade, boycotted by several western nations. All five neighbours of Myanmar – India, China, Bangladesh, Thailand and Laos – had attended the parade.