Last week's controversial memo came as the government negotiates a power-sharing deal with the Taliban, and critics said it recalled rules the group imposed during its 1990s rule, when it banned girls from school. 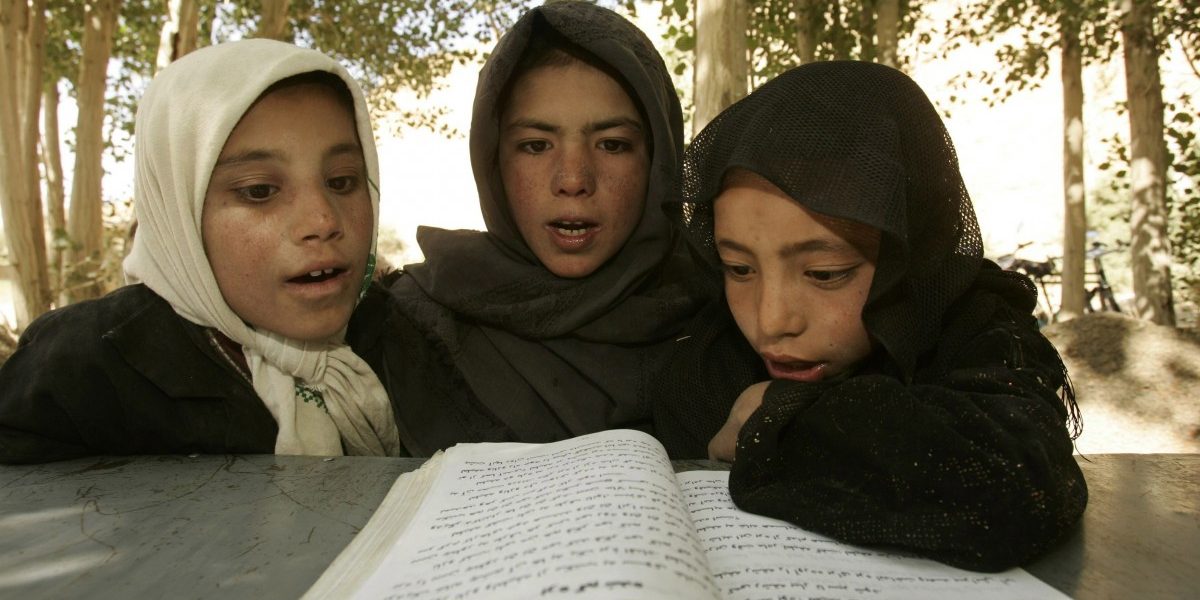 Afghan schoolgirls read in chorus at a class at the Bariky Chaedam primary school in the outskirts of Bamiyan August 31, 2005. Women were banned from studying during the Taliban regime. Photo: Reuters/Zohra Bensemra

Kabul: Afghanistan’s government has backtracked on an attempt to ban schoolgirls over the age of 12 from reciting poems or singing at public events, following public outcry and criticism from cultural figures and rights campaigners.

Days after critics said a directive sent to schools in the capital marked a backwards step on girls’ rights, the education ministry said it was committed to allowing all students – male and female – to take part in cultural and sporting activities. It said the memo had been issued by the head of Kabul’s education directorate and “does not reflect the policy of the Ministry of Education”. The ministry added in a March 13, 2021 statement, “The Ministry of Education is addressing the issue and afterwards, the evaluation of the findings will be shared with the countrymen.”

Last week’s controversial memo came as the government negotiates a power-sharing deal with the Taliban, and critics said it recalled rules imposed by the hard-line Islamist group during its 1990s rule, when it banned girls from school.

The education ministry originally defended the measure on the grounds that parents had asked for their daughters to be excluded from public performances and said some students complained that such commitments hindered their studies.

The memo said female students aged over 12 would only be permitted to read poetry or sing at all-female gatherings.

Also read: Women in Afghanistan Worry Peace Accord With Taliban Could Cost Them Hard-Won Rights

Under the Taliban, singing was banned in public, but since the end of the group’s rule in 2001, groups of girls and boys have revived the tradition of reciting well-known poems and singing anthems at school events or on national days.

The country’s independent human rights commission, which was among organisations that spoke out against the ministry’s directive, said public pressure had prompted the U-turn. “The protests from various quarters forced the education ministry to reconsider its decision, but questions and concerns remain in regard to human rights, particularly women and children’s rights,” said spokesperson Zabihullah Farhang. “We are especially concerned about human rights in regard to the ongoing peace process [with the Taliban],” he told the Thomson Reuters Foundation.

Among well-known cultural figures who criticised the ban was Ahmad Sarmast, founding director of the country’s national music institute, who launched the #IAmMySong social media protest campaign. He urged the campaign’s supporters to remain on alert until the ministry issued a new decree officially reversing the ban. “We should not rest until [the] needed decree is issued. Back to action in full force,” Sarmast, who established a national women’s orchestra, tweeted on Monday.

The effort to restrict schoolgirls’ cultural activities came against a background of increasing violence in Afghanistan, mainly targeted assassinations of rights defenders, journalists and civilian government employees – many of them women.

Foreign donors have poured billions of dollars into Afghanistan in the last two decades to help create a more open and equal society, and the education ministry’s move sparked international concern, too. A spokesperson for Britain’s Foreign Commonwealth and Development Office said last week it was “seeking clarification from the Afghan Ministry of Education on these reports, and any potential implications for UK-funded education work”.