‘Everything Has Been Destroyed’: Myanmar Artists on the Coup’s Impact

Rocker Kyar Pauk and heartthrob actor Daung denounced the coup from the outset. Now in hiding, they still find ways to resist the regime.

The Myanmar military’s coup turns eight months old on Friday, and the takeover has had a resounding impact on the country and its people. The regime’s follow-up crackdowns on protesters over the last seven months have seen more than 1,000 people killed and several thousand others detained. For all its brutality, the junta still can’t control the country due to various forms of ongoing popular anti-regime resistance. While some people have taken up arms, some of the country’s most popular artists are using their skills and fame to rally people to the cause and keep the revolution going strong.

Meet Kyar Pauk, one of Myanmar’s most famous rockers, and heartthrob actor Daung.

Both artists have denounced the coup from the outset. Now in hiding, they still find ways to resist the regime. The lead singer of the band Big Bag produces podcasts chronicling unfolding resistance-related events, with the aim of keeping people motivated without giving them “false hope”.

The 31-year-old actor Daung actively lobbied for the Civil Disobedient Movement (CDM) against the regime following the coup. For his activism, he was targeted with false rumors that he had a relationship with the regime leader’s daughter—claims he strenuously denies in the interview below. Currently, he said he is supporting the revolution as best as he can but is reluctant to go into details due to security concerns.

They talked to The Irrawaddy about the reasons behind their opposition to the junta, as well as their hopes.

What led you to participate in the revolution against the military dictatorship?

Kyar Pauk: I joined the movement neither as a rock star nor an artist. I reject military rule as a citizen. The people have the right to speak if they do not like the person who rules them. You need to make your voice heard. It has nothing to do with having many followers. You have to stand on the side that you think is right and show the right side of what you stand for. I do play that role. Another reason is I want to share my message. It doesn’t matter if they block my views one way or another, or whether my songs are not allowed to be sung on stage or be aired on the radio. We have to think about how often we speak out through our own platform. That is the key.

For eight months since the Feb. 1 coup, you have played your part by motivating others. In this revolution, if some feel depressed and frustrated, what would be your message to them?

KP: The main thing is that we need to know the real situation. The real situation is it will take time, because a lot of things are out of our control. Things can’t be done based on our decisions alone. It depends on the decisions of other people, so patience is key.

No one can say at this time how long it will take. You have to choose what role you will play. But if we get too excited and work so hard every day, we will get tired and burn out. We must strike a balance. We have to know our situation. We must keep that in mind.

How has the coup affected you?

Before the coup, you must have had plans for the future. How were you preparing for 2021 before the coup? Are those plans all gone now?

KP: In fact, life is ruined. Everything you believed in and built has been destroyed. I am not alone. As you know, it has happened to all of us, more or less.

What prompted you to be outspoken against injustice and stand up for truth? And what do you want now?

KP: Before 2010, throughout our lives, we did not know much about education or social problems. Then the political transition came, the doors were opened. I knew I did not have freedom under previous military regimes. Then under the civilian governments, we did have relative freedom, if it was not absolute freedom. But when the coup happened, these freedoms were immediately revoked. That’s it. That is the inspiration for all of us. It’s not just me who is motivated to defy the military regime. Everyone knows that loss of freedom is losing a part of our life. Everyone feels empty.

Could you tell us about the beliefs that led you, as an artist, to get involved in the Spring Revolution and the current anti-dictatorship movement?

Daung: When this [coup] happened, it went without saying that our future was ruined. This is not fair. If we did not respond, we would not be human. Because we live in a society. As a citizen, I cannot accept it at all. That’s why I resist.

I am an artist and the artists belong to the people. We stand with the people to show that we, the artists, do not accept the coup. That’s how I got involved in this revolution. In the beginning, I rejected injustice, and then resisted.

For the past eight months since the coup, you have continuously shown defiance and relentless opposition to the military dictatorship. Some express doubt about how long the revolution will last. How do you keep your spirits up?

Daung: Simply put, the time has passed while we’ve been contributing our part. Before this coup, I posted on Facebook that we, the people, voted [for the National League for Democracy in last November’s election]. The next day, when the military staged the coup, I felt so sad. I think that feeling is still going strong.

From then on, I asked myself, ‘What can I do?’ I will do my best as a citizen. I’ve been working based on my beliefs and decisions step by step until now.

My purpose is simple. I will continue to work until this dictator is overthrown. I don’t think I could work on creating any art other than revolutionary art. I wouldn’t want to. I don’t know why. 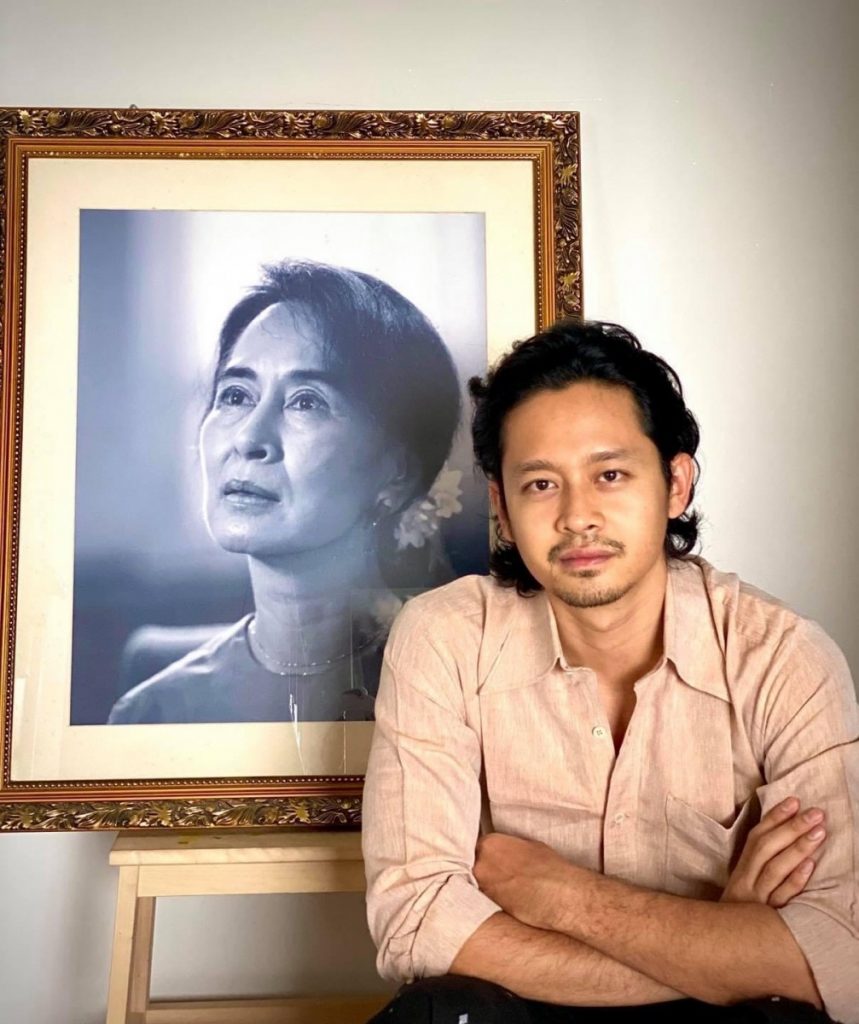 Yourself and many young people were born and raised during the previous military dictatorships. Then, we had this era of democracy for 10 years. How did you feel when you heard about the military coup on that day?

Daung: Let me give you an analogy: It’s like the electricity going out while you are watching a very interesting movie. There is anger when you’re plunged into darkness. Everyone feels empty and [in Burmese] we say the word “ha” in unison. It was not just me who felt that way: It happened to the whole country.

As you said, we grew up under the dictatorships. We lived like a bird in a cage that did not know we could fly in the sky. Then, the cage door opened [with the democratic transition] and we got half way, flying in the sky. Suddenly, we are now put back in a cage. Such a situation is unacceptable. We are not only fighting the coup leaders and the regime; we are fighting with the intention of making our country the best it can be. I think we all need to understand that.

We must fight them, to deter their destruction. They must be destroyed, demolished and eradicated.

Since you have many supporters as an actor, have there been any personal attacks against you or threats for joining this revolution?

Daung: Now I’m being accused of extra-marital relations with someone I do not know. I have never talked to her. I only shot one film with that production company [Seven Senses]. I did not know that it was led by them [Khin Thiri Thet Mon, the daughter of coup leader and commander-in-chief Senior General Min Aung Hlaing]. I think a few actors and actresses took a group photograph with her once at the launch of that film production. That’s it. I’ve received lots of criticism since then. I have already made a decision since then that I would not make contracts with that company. That’s how I’ve rebelled.

It hurts so much to be accused of having a relationship with this woman. I don’t have any such relationship. There are such attacks.

Next time, when our country gets back on the path to democracy, I will practice my art again. I value my art a lot. I believe that art will return in a new form. Because of the experience we are going through now, it will be a lot more mature than before. The people, all of us, want to contribute our best for our country. I believe we can make more beautiful creations. We put our hope in that. That is why we are continuing the revolution.

This article was first published on The Irrawaddy.