Biden vowed to go after the perpetrators of Thursday's bombing and said he had ordered the Pentagon to plan how to strike ISIS-K, the Islamic State affiliate that claimed responsibility. 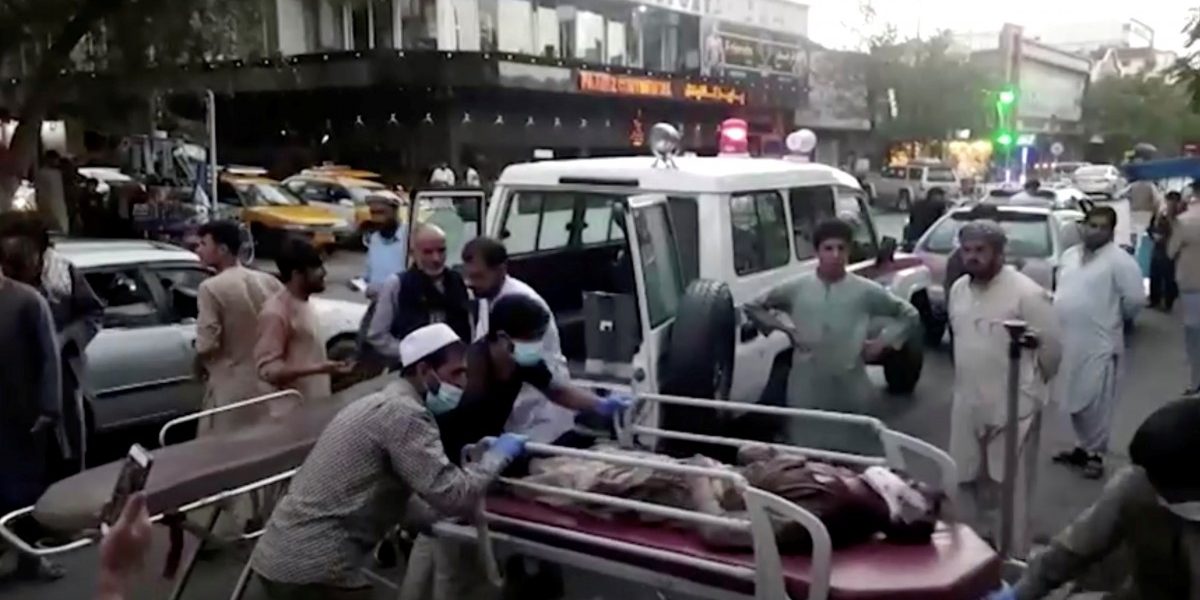 A screen grab shows people carrying an injured person to a hospital after an attack at Kabul airport, Afghanistan, August 26, 2021. Photo: Reuters TV/1TV

US forces helping to evacuate Afghans desperate to flee Taliban rule were on alert for more attacks on Friday after at least one Islamic State suicide bomber killed 85 people including 13 US soldiers outside the gates of Kabul airport.

Two blasts and gunfire rocked the area outside the airport on Thursday evening, witnesses said. Video shot by Afghan journalists showed dozens of bodies strewn around a canal on the edge of the airport.

A health official and a Taliban official said the toll of Afghans killed had risen to 72, including 28 Taliban members, although a Taliban spokesman later denied that any of their fighters guarding the airport perimeter had been killed.

The US military said 13 of its service members were killed in what it described as a complex attack.

Islamic State (ISIS), an enemy of the Islamist Taliban as well as the West, said one of its suicide bombers targeted “translators and collaborators with the American army”.

It was not clear if suicide bombers detonated both blasts or if one was a planted bomb. It was also not clear if ISIS gunmen were involved in the attack or if the firing that followed the blasts was Taliban guards firing into the air to control crowds.

The attack was carried out as US forces raced to complete their withdrawal from Afghanistan, after President Joe Biden said the United States had long ago achieved its original rationale for invading the country in 2001: to root out al Qaeda militants and prevent a repeat of the September 11 attacks on the United States.

Biden vowed to go after the perpetrators of Thursday’s bombing and said he had ordered the Pentagon to plan how to strike ISIS-K, the Islamic State affiliate that claimed responsibility.

Corpses were in the canal by the airport fence, video from the scene showed, some being fished out and laid in heaps while wailing civilians searched for loved ones.

“For a moment I thought my eardrums were blasted and I lost my sense of hearing. I saw bodies and body parts flying in the air like a tornado blowing plastic bags. I saw bodies, body parts, elders and injured men, women and children scattered,” said one Afghan who had been trying to reach the airport. “That little water flowing in the sewage canal had turned into blood.”

The US deaths were the first in action in Afghanistan in 18 months, a fact likely to be cited by critics who accuse Biden of recklessly abandoning a stable and hard-won status quo by ordering an abrupt pullout.

General Frank McKenzie, head of US Central Command, said the United States would press on with evacuations, noting that there were still around 1,000 US citizens in Afghanistan. But several Western countries said the mass airlift of civilians was coming to an end, likely to leave no way out for tens of thousands of Afghans who worked for the West through two decades of war.

McKenzie said US commanders were bracing for more attacks by Islamic State, including possibly rockets or vehicle-borne bombs targeting the airport.

“We’re doing everything we can to be prepared,” he said.

Violence by Islamic State is a challenge for the Taliban, who have promised Afghans they will bring peace to the country they swiftly conquered. A Taliban spokesman described the attack as the work of “evil circles” who would be suppressed once foreign troops leave.

Western countries fear that the Taliban, who once sheltered Osama bin Laden’s al Qaeda, will allow Afghanistan to turn again into a haven for militants. The Taliban say they will not let the country be used by terrorists. 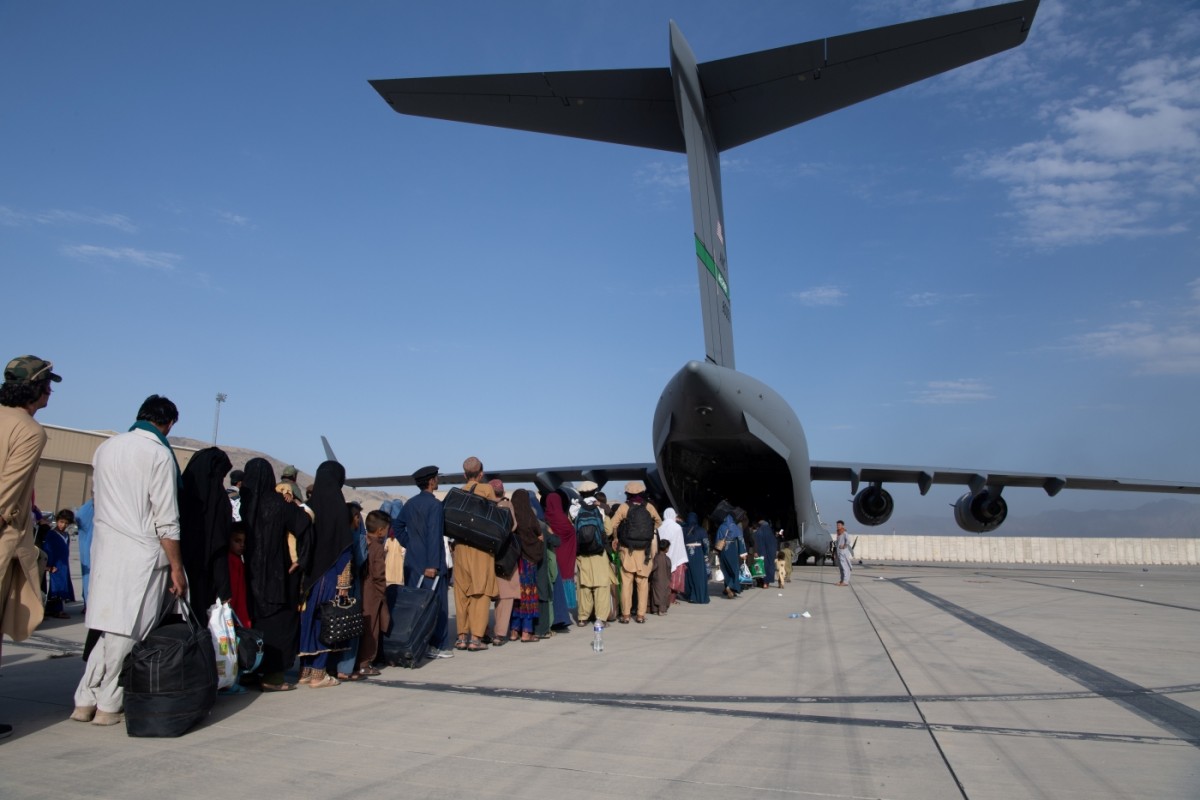 Zubair, a 24 year-old civil engineer, who had been trying for nearly a week to get inside the airport with a cousin who had papers authorising him to travel to the United States, said he was 50 metres from a suicide bomber who detonated explosives at the gate.

Washington and its allies had been urging civilians to stay away from the airport, citing the threat from Islamic State.

In the past 12 days, Western countries have evacuated nearly 100,000 people. But they acknowledge that thousands will be left behind following Biden’s order to pull out all troops by Aug 31.

The last few days of the airlift will mostly be used to withdraw the remaining troops. Canada and some European countries have already announced the end of their airlifts.

Biden ordered all troops out of Afghanistan by the end of the month to comply with a withdrawal agreement with the Taliban negotiated by his predecessor Donald Trump. Biden spurned calls this week from European allies for more time.

The collapse of the Western-backed government in Afghanistan caught US officials by surprise and risks reversing gains, especially in the rights of women and girls, millions of whom have been going to school and work, once forbidden under the Taliban.

Biden has defended the decision to leave, saying US forces could not stay indefinitely. But his critics say the US force, which once numbered more than 100,000, had been reduced in recent years to just a few thousand, no longer involved in fighting on the ground and mainly confined to an air base. It was a fraction of the size of US military contingents that have stayed in places such as Korea for decades.

Fighters claiming allegiance to Islamic State began appearing in eastern Afghanistan at the end of 2014 and have established a reputation for extreme brutality. They have claimed responsibility for suicide attacks on civilians, government targets and ethnic and sectarian minorities.