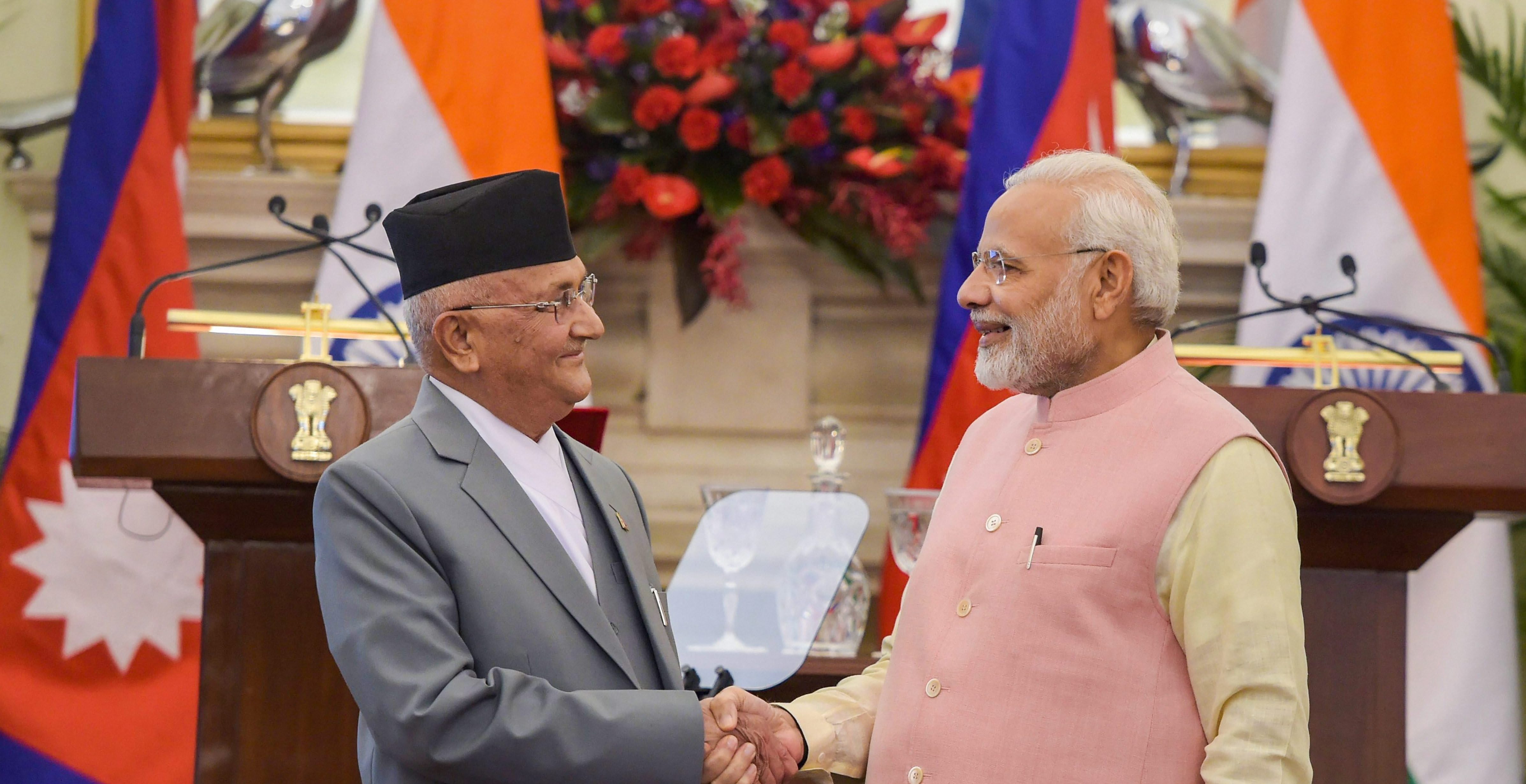 New Delhi: Nepali prime minister K.P. Oli reiterated on Saturday that cross-border electricity trade with India has to be on the basis of the 2014 bilateral agreement, and not as per the guidelines framed by the Indian power ministry.

Oli is currently on his second visit to India as prime minister of Nepal. This is his first foreign trip since taking over the office again in February this year.

After arriving on Friday morning, he met with Congress president Rahul Gandhi and held discussions with captains of Indian industry.

On Saturday, the 66-year-old veteran communist leader held formal talks with Prime Minister Narendra Modi, following which they inaugurated an integrated check post and launched the construction of a petroleum products pipeline.

In his media statement after the discussions, Oli brought up the issue of not restricting cross-border electricity trade due to the nature of ownership of the power plant.

I appreciated the government of India’s initiative to have guidelines and rules for cross border trade of electricity. It is definitely a step ahead. However, I conveyed Nepal’s desire to see an early realisation of the open market provision of the power trade agreement which was concluded between us in 2014, thanks largely to Modiji’s positive direction.

Oli was referring to the Indian power ministry’s guidelines issued in December 2016 for cross-border trade in electricity. According to those rules, power plants owned or with majority stake by Indian public-sector companies and host government will require a one-time approval for electricity trade. All other projects can take part in cross-border power trade with India, but will be approved only on a case to case basis. This provision effectively shuts out all power plants in India’s neighbourhood operated by the private sector or by third countries.

After the 2016 guidelines were announced, Nepal had argued that the new rules were discriminatory and went against the spirit of the power trade agreement signed with India in 2014. This was reiterated publicly by Oli on Saturday.

The reference was to article 2(b) in the 2014 agreement on electric power trade, cross-border transmission interconnection and grid connectivity –

The parties shall allow non-discriminatory access to the cross-border interconnection(s) for all authorised/licensed participants in the common electricity market.

While India has been involved in the hydropower sector in Nepal, Chinese firms have also picked up several contracts. India is certainly not keen on Chinese firms being able to take advantage of Kathmandu’s relationship with New Delhi so as to get a market for the power produced, even as Indian firms faced political roadblocks in completing projects.

The Indian foreign secretary emphatically told the media that China “did not figure in the talks” between the two leaders.

The last time that Oli was here in February 2016, he visited New Delhi in the aftermath of the ‘blockade’ in which Madheshis effectively shutdown cross-border trade to protest what they said were discriminatory provisions in the newly-promulgated constitution. People in Kathmandu were  convinced the blockade was backed, if not engineered by India, a charge New Delhi denied.

Since then, Oli has returned to the helm on the basis of a strong mandate at the federal elections, which has arguably put the Nepal government on a stronger footing vis-à-vis its giant neighbour to the south.

“I think the circumstances in 2016 and today are different. The government of Nepal has been elected on the basis of constitution that has been passed,” said foreign secretary Vijay Gokhale on a question about the takeaways from India’s strained ties with Nepal during Oli’s last trip to New Delhi.

“Efforts of both leaders at today’s meetings were to have a forward-looking approach and to see how we can deepen and strengthen the relationship not only by completing, progressing existing initiatives but also some game-changing initiatives to build those relations,” he added.

There was, however, a slight feeling of déjà vu as the two prime ministers remotely inaugurated the integrated check post at Birgunj in Nepal and the ground-breaking ceremony for the Motihari-Amlekhgunj cross-border petroleum products pipeline at Motihari, India.

The nine-month long blockade in 2016 had impacted the border post at Birgunj severely, with long lines of trucks waiting for clearance for days as Madheshi activists picketed the trade junction. The blockade had led to a severe fuel shortage in Nepal as India was the sole source of petroleum products transported through tankers.

Oli also raised the issue of the trade deficit with India, which a top Indian diplomat said will be discussed during the next meeting of the commerce secretaries of both countries.

The initiatives approved during this visit is a new agreement on use of India’s waterways and a rail link from Raxaul to Kathmandu.

“An important result of our commitment to this cooperation is the decision of cooperation in inland waterways. With our assistance, Nepal will get an extra connectivity to the sea. And the country of Sagarmatha (Everest) will be able to connect directly to the sagar (ocean). I believe that this is a historical beginning,” said Modi.

The protocol for the Treaty of Transit between India and Nepal will be modified to include inland waterways as an additional means of transport.

For the new line from Raxaul in India to Kathmandu in Nepal, a preparatory survey will be carried out within one year, following which the two sides will finalise the implementation and funding modalities for the project.

Further, a new partnership in agriculture was also launched, which will include cooperation in organic farming and soil health.

The Nepali prime minister apparently raised the issue of resuming the SAARC summit. Pakistan was supposed to host the summit in 2016, but it was postponed after India, Bangladesh and Afghanistan refused to take part. The Indian prime minister made clear that New Delhi was still not ready to participate in a Pakistan-hosted summit.

“…the views expressed by the [Indian] prime minister were that that Prime Minister Oli is aware of the circumstances… The prime minister mentioned that he had very enthusiastically participated in the Kathmandu summit. Given the current state of play where there is cross-border terrorism and where this is a disruptive force in the region, it is difficult in such circumstances to proceed with such initiatives. There was some discussion on this, yes,” said Gokhale.

On the issue of security, Modi said that both leaders agreed “to prevent the abuse of our open border, and to pursue our shared security interests”. Oli also accepted that security concerns of both sides should be taken into consideration.

Before leaving for India, Oli had said that he would take up the matter of finding a solution to the long-standing unresolved issue of exchange of demonetised Indian currency. However, this topic did not come up during discussions, as per Gokhale.