The Nepali security forces did not allow the workers to cross over, and their Indian counterparts who had let them cross the Indian border did not want them back. The migrant workers’ ordeal is far from over. 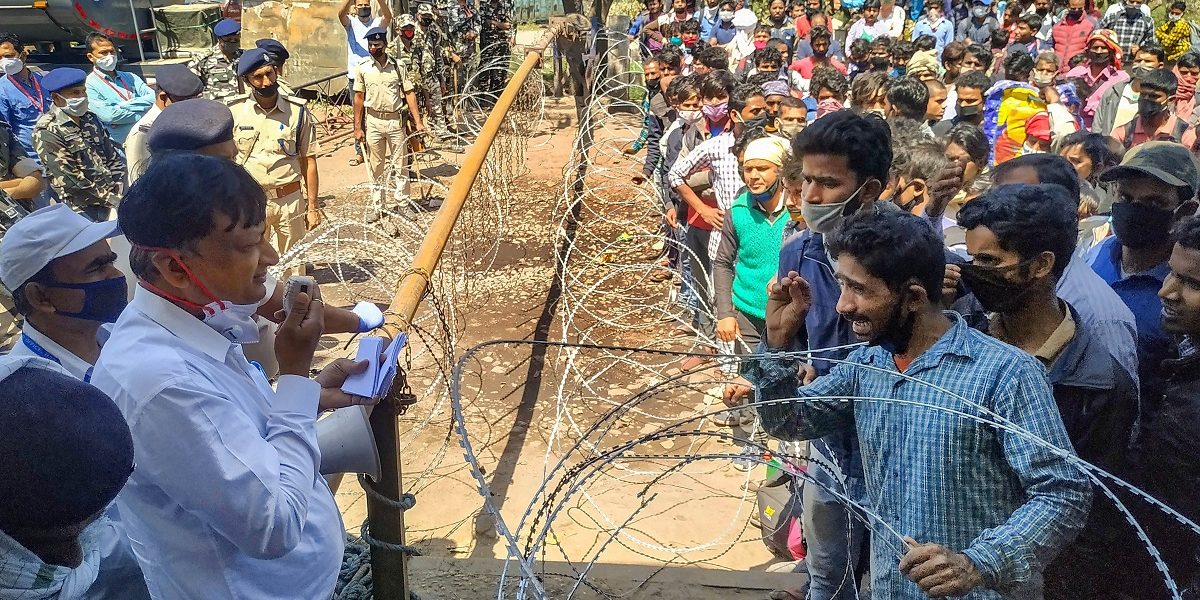 Migrants interact with Indian authorities as they block the India-Nepal border with barbed wires during the complete national lockdown at Raxaul in East Champaran, Monday, March 30, 2020. Photo: PTI

Gorakhpur: In the wake of the nationwide lockdown imposed in India to tackle the COVID-19 pandemic, the country’s international borders have been sealed. Consequently, 326 Nepali migrant workers who had set off from India for Nepal found themselves trapped for 22 hours in no man’s land.

For those 22 hours, Nepal’s security forces did not allow them to enter Nepal. Nor were they able to enter India. On March 30, when the migrant workers attempted to cross over to Nepal, they were lathi-charged by the security forces. Angered, they had raised slogans against them.

Finally, at about 8:30 pm on March 31, the labourers were admitted into India and sent to the Nautanwa Inter College in Maharajganj district. On the other hand, about 100 Indians who were similarly stranded at the Nepal border, were moved from there and taken to a destination inside Nepal. These steps were taken as day-long discussions between officials of both countries to send the stranded people to their respective countries proved inconclusive.

India has been under lockdown since March 25. Nepal announced a lockdown from March 24-31 – subsequently extended to April 1 – which the Nepali security forces have been trying to implement strictly. Because of this situation on both sides of the border, all movement has come to a stop at the Sonauli border crossing on the Indian side, in Maharajganj district (Uttar Pradesh). The barriers are up on both sides.

There are some exceptions: vehicles carrying essential items like vegetables and cooking gas from India to Nepal are being allowed. Under normal circumstances, the Sonauli border crossing sees a heavy movement of people as well as freight vehicles in that direction.

On March 29, when the Uttar Pradesh government ran a thousand buses for migrant workers stranded in various places, Nepali migrant labourers who had been working in Noida, Faridabad and Gurgaon also set off for their country. Some who had started their journey even earlier, travelling by bus and any transport they could find, had started reaching Sonauli by the morning of March 29. Squatting in the shade of the Sonauli bus stand they waited for the border to open.

At about 9:30 pm on March 30, the labourers started walking towards the border. Security forces from the police and Sashastra Seema Bal who were manning the border, allowed them to pass, but their Nepali counterparts, citing the lockdown, prevented them from crossing over to the Nepal side.

After waiting for a long time, the workers started raising slogans against the Nepali security forces and even tried to push their way through, at which point they were lathi-charged and pushed back to no man’s land (a 30-feet stretch demarcating the borders on both sides where the countries locate their customs, police, immigration and security forces’ posts). The barricades went up at the Nepal border and then on the Indian side, too. From the night of March 30 to about 8:30 pm on March 31, the Nepali migrant workers remained stranded on no-man’s land.

On March 31, the whole day was spent in discussions between officials of both countries to see that people stranded on both sides reached their respective countries, but the issue was not resolved. The district magistrate and superintendent of police of Maharajganj district also paid a visit to the border in an attempt to resolve the issue.

Since no agreement had been reached until the night of March 31, the 326 Nepali migrant workers trapped in no-man’s land were taken to Nautanwa Inter College and, on the other side of the border, the stranded Indians were taken to a shelter home in Nepal by officials.

Manoj Singh is the editor of the website Gorakhpur Newsline.