The Imran Khan government has decided to privatise the state-run Steel Mills in order to steer it out of financial losses. More than 9,000 workers, who are already affected by the COVID-19 crisis, will be rendered jobless. 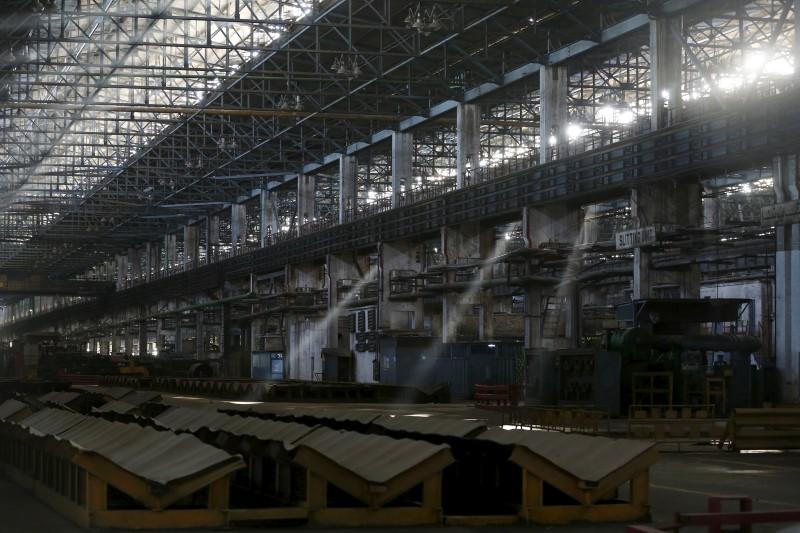 A general view of the deserted hot strip mill department of the Pakistan Steel Mills on the outskirts of Karachi, February 8, 2016. Photo: Reuters/Akhtar Soomro

Shaikh Irshad, a 39-year-old weaver in Faisalabad city, can’t make ends meet due to the coronavirus crisis, which has paralysed the country’s industrial sector.

“Even with my meagre income before the pandemic, I could hardly manage to feed my family. Now we can barely survive,” Irshad told DW.

Pakistan’s economy was in tatters even before the emergence of coronavirus, but the pandemic has added to the South Asian country’s economic woes.

Nearly 90,000 people have tested positive for the virus, with more than 1,800 related deaths. The country has recorded a huge spike in COVID-19 cases since Prime Minister Imran Khan’s government lifted lockdown restrictions in mid-May.

Khan insists the revival of the economy is more important than containing the spread of coronavirus.

“Unfortunately, the [previous] lockdown has already hit the poor people. We no longer can afford that,” Khan told media in the capital, Islamabad. “Therefore, except for a few sectors, all other sectors will stay open,” he recently said, adding that the government wants to “save people from coronavirus and hunger simultaneously.”

“Coronavirus is going nowhere, at least this year. That means we have to live with it following safety guidelines,” Khan said.

But in order to revive the economy, Khan’s government is shifting the onus to the private sector, which experts say could result in thousands of public job cuts.

Amid the coronavirus crisis, the government is planning to shed a number of state-run enterprises.

Hammad Azhar, the minister for industries and production, said Friday the government has decided to privatise Pakistan Steel Mills in order to revive and steer it out of losses.

About 9,000 employees of the Steel Mills will be sacked in two phases after payment of their dues and one-month salary, Azhar told media.

The Human Rights Commission of Pakistan (HRCP), an NGO, said it was “horrified at reports that 9,300 plus Pakistan Steel Mills employees may be laid off.”

“Both the government and ECC (Economic Coordination Council) have a moral responsibility to ensure employees’ long-term welfare when the labor sector is already under immense pressure as a result of the COVID-19 crisis,” the HRCP, which is a membership-based independent organisation, said in statement.

“Employment and the right to work must take precedence over profits, especially in absence of well-entrenched safety nets and prospect of hyperinflation,” the rights organisation added.

The government says it has been pumping billions of rupees into state-owned entities for years, which has added to its financial woes.

State-run commercial and industrial entities have been marred by corruption, nepotism and gross incompetence, for which Khan’s administration blames previous governments. 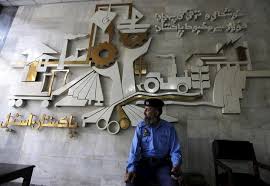 A security guard sits in front of a wall with signs and slogans at the operation building at the Pakistan Steel Mills, Karachi. Photo: Reuters/Akhtar Soomro/Files

Labor organisations are planning to hold demonstrations across the country to protest against the government’s planned privatisation drive.

“Prime Minister Imran Khan and some of his cabinet members are involved in a plot to unleash a wave of unemployment and chaos and create a situation to sell off state-owned enterprises for peanuts to their invisible partners,” he said in a statement on Wednesday.

Businessmen and industrialists say they are forced to lay off workers due to the economic situation. Qaiser Ahmed Shaikh, a prominent industrialist and member of parliament’s finance committee, said several sectors have borne the brunt of the pandemic.

When Khan took power in 2018, Pakistan’s GDP growth was around 5.8%; now it is 1.9% and is likely to decline further. The country’s fiscal deficit is almost 10% and revenues have plummeted in the past two years.

“I do not see any chance of improvement,” Shaikh told DW, adding that the global economy is facing recession due to coronavirus. “All we can do is wait for the coronavirus vaccine and the normalisation of economic activities around the globe.”

Salman Shah, a former finance minister and current adviser to Punjab province’s chief minister on economic affairs, admits “more than 20 million people have lost their jobs” due to the health crisis.

“Only 2.5% of GDP is being spent on providing social safety to the working class; it should be 10% at least. We want to increase it but International Monetary Fund’s conditions don’t allow us to do that,” Shah underlined.

Planning and Development Minister Asad Umar said last month around 18 million people in Pakistan could lose their jobs because of the pandemic, whereas 20 to 70 million people might fall below the poverty line this year.