Sam Rainsy plans to enter the country on its Independence Day on Saturday. 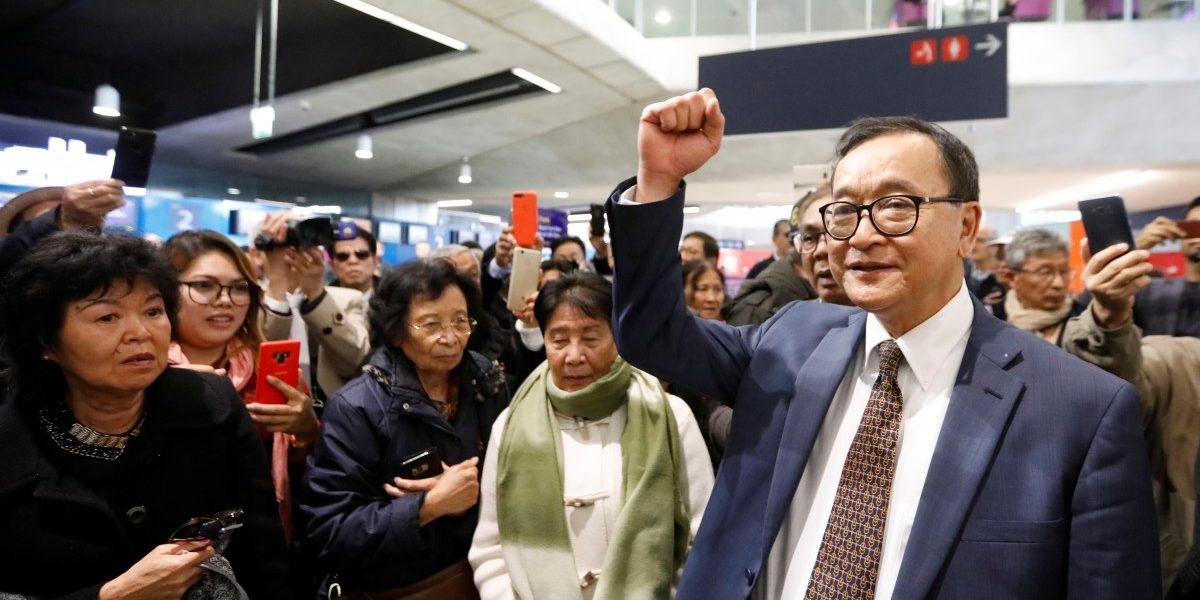 Cambodia's self-exiled opposition party founder Sam Rainsy, who has vowed to return to his home country, gestures to supporters after being prevented from checking-in for a flight from Paris to Bangkok at Roissy Airport in Paris, France November 7, 2019. Photo: Reuters/Charles Platiau

Sam Rainsy has been in exile in France, where his family settled in the 1960s.

He is an arch rival of Hun Sen, Cambodia’s authoritarian leader in power since 1985.

But Hun Sen vowed not to allow Rainsy to return, saying he would be arrested on sight and sought support from regional neighbours to thwart the opposition’s plans.

Mu Sochua was also detained at the Kuala Lumpur airport in Malaysia on Thursday.

A homecoming in sight?

Rainsy spoke to RFI a short while before attempting to board his plane to Thailand.

“I will enter Cambodia on 9 November with a group of people who share my ideas”, he asserted.

Despite the Thai PM’s assurance that he would not let him enter Bangkok, Rainsy seemed optimistic.

“His position might change,” Rainsy said. “We do not intend to cause any trouble in Thailand. Once we cross over into Cambodia, it’ll be a matter between Cambodians.”

Rainsy also seemed convinced that the Cambodian border patrol would let him and his supporters in.

“The soldiers are there to defend our territory, not to shoot civilians,” Rainsy told RFI

His intentions, he claimed, are motivated by a desire to change the current status quo in Cambodia.

“The country is spiralling into extreme poverty, people are losing their lands, there is deforestation…. We are one of the poorest and most corrupt countries in the world”, Rainsy said.

“Right now, the Chinese are buying up everything “ he told RFI.

“Hun Sen is letting Chinese neo-colonialism make its way into Cambodia. This is a threat to peace and stability in the region.”

According to Rainsy, Cambodia should be neutral vis-a-vis China, and not be an ally of what he calls China’s current “aggressive” and “expansionist” policies.

A People Power movement on the way ?

Asked by RFI if he wanted to stir up the masses against the regime, Rainsy replied that there was “no other choice”.

Cambodia is currently a one-party regime under Hun Sen, Rainsy claims. This, he says, goes against the 1991 Peace Agreement signed in Paris, which “called for a democratic, liberal and multi-party system for Cambodia”.

“There cannot be democracy without opposition”, Rainsy said. “And in Cambodia, you can’t have an opposition without the National Rescue party which I represent.”

However, Rainsy emphasised that the “public pressure’ that his party desires would be peaceful and non-violent, like the 1986 ‘People Power’ protests in the Philippines that restored democracy to the country.

“Hun Sen is scared”, Rainsy said. “He’s dissolved our party and we’re not supposed to be active at all. Now If he that scared of us, it means that the opposition is legitimate enough to bring about the democratic change that the people want.” Rainsy concludes.