The attack came after a lull of at least a year in violence against the mainly Shi'ite Hazara minority in Balochistan, though there have been isolated shootings. 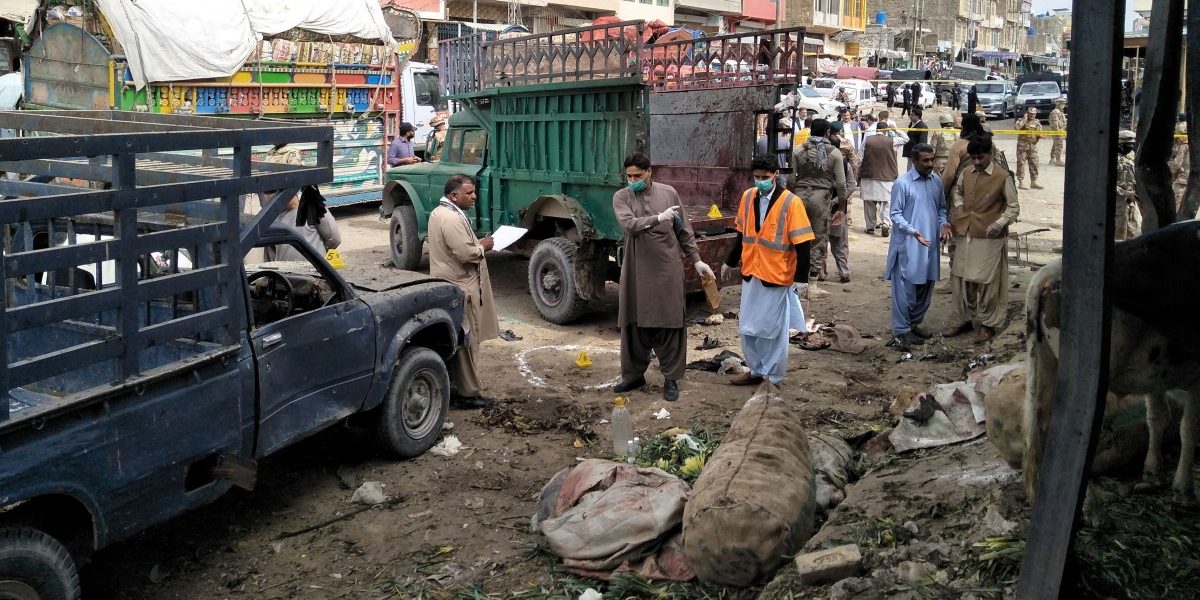 Members of the bomb disposal unit survey the site after a blast at a vegetable market in Quetta, Pakistan April 12, 2019. Credit: Reuters/Naseer Ahmed

Quetta, Pakistan: A bomb hidden between bags of potatoes at an outdoor Pakistani market killed at least 16 people on Friday, half of them ethnic Hazaras, officials said, in an attack apparently aimed at minority Shi’ite Muslims.

At least 30 people were wounded in the blast in the southwestern city of Quetta, the capital of resource-rich Balochistan province, officials said.

Baluchistan is the focus of the $57-billion China Pakistan Economic Corridor, a transport and energy link planned between western China and Pakistan’s southern deepwater port of Gwadar.

The attack came after a lull of at least a year in violence against the mainly Shi’ite Hazara minority in Balochistan, though there have been isolated shootings.

The blast took place at Hazar Ganji, a fruit and vegetable market on the outskirts of Quetta.

“I have confirmation of 16 martyrs – eight belong to the Hazara community, seven others who worked here, and one is from the Frontier Constabulary,” a city police official, Abdul Razzaq Cheema, told reporters.

The explosive device was hidden between sacks of potatoes, he said.

Mengal had been detained for three months under maintenance of public order regulations, he said.

The LeJ has worked both with al Qaeda and Islamic State in Pakistan and has claimed several coordinated attacks in Balochistan against what it terms Shi’ite heretics.

Ethnic Baloch separatists are also battling what they call unfair exploitation of the province’s gas and other resources.

In 2013, three bombings killed more than 200 people in Hazara neighbourhoods, prompting security forces to escort Hazara buses to the market. The same practice was followed on Friday, but the blast took place in the market.

“Targeted for their religion by sectarian armed groups, (Hazaras) have suffered many such tragedies over several years. Each time there are promises that more will be done to protect them, and each time those promises have failed to materialise,”

Omar Waraich, an official of rights group Amnesty International, said in a statement.

“Prime Minister Imran Khan’s government has made important commitments to protect all religious groups. Those commitments must translate now into policies to effectively protect the Hazaras of Quetta, ending more than a decade of bloodshed.”