At the heart of the conflict between Islamist and the Awami League is a disagreement over whether the statues are 'un-Islamic and anti-Shariat' or 'works of sculpture'. 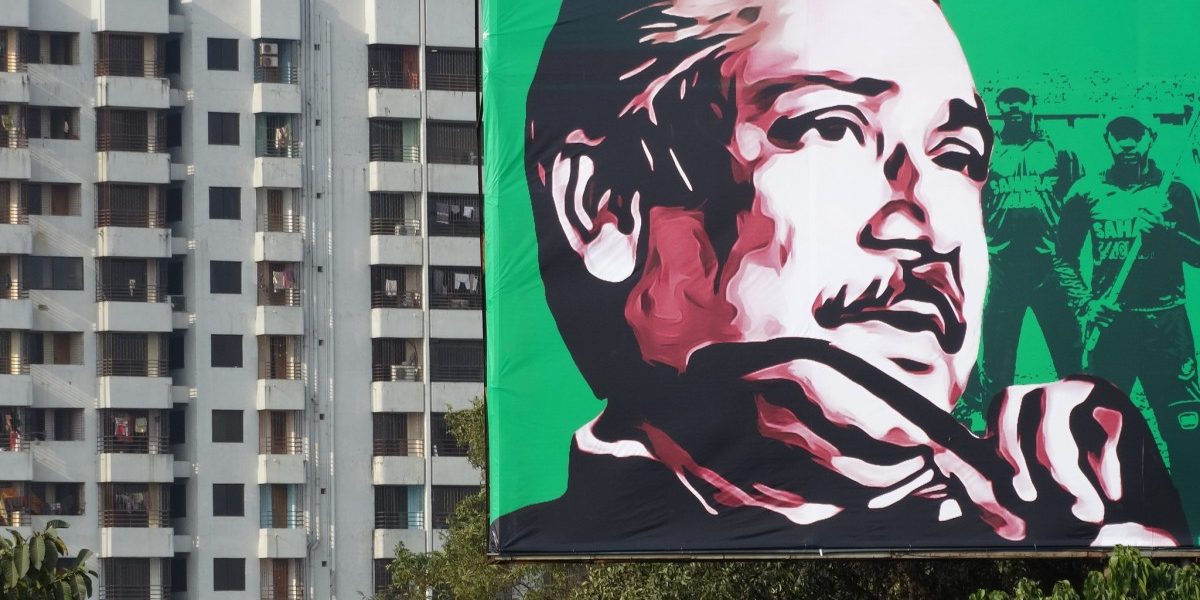 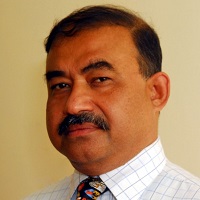 A statue of Bangladesh’s founding father Sheikh Mujibur Rahman was found defaced in the country’s western city of Kushtia on December 5, sparking possibilities of violence in an escalating confrontation between Islamist radicals and the ruling Awami League and its secularist allies.

The Islamist radicals oppose the installation of Mujib statues that the Awami League and other secularist groups are installing in various parts of Bangladesh to honour the country’s great leader in his centenary year. They say statues and idols are ‘un-Islamic and anti-Shariat’ but the Awamis argue these are ‘works of sculpture’, many of which exist even in front of mosques elsewhere in Islamic countries from Turkey to Pakistan.

“Those who have defaced the statue at Kushtia will not be spared, we have asked the police to track them down and punish them,” said Mahbubul Alam Hanif, joint general secretary of the Awami League who represents Kushtia in parliament.

The present confrontation was sparked off by Islamist opposition to the installation of a Mujib statue at Dholaipar in the suburbs of capital Dhaka. It followed the countrywide anti-France protest rallies by Hifazat-e-Islam, a powerful radical group heading a coalition of Islamist groups that pushes for a blasphemy law in Bangladesh.

The Awami League and secular groups close to it are determined to see the statue installed – backing off now would be tantamount to surrender of the ‘1971 Liberation War values’, they say.

Hifazat supremo Junaid Babunagari said recently that the Awami League will have to abide by Muslim values enshrined in Shariat or face violent resistance. “We will not object to a minar honouring Sheikh Mujib, but I will pull down a statue even if it was that of my father,” Babunagari told mediapersons.

Babunagari also aksed for declaring the Ahmadiyyas as ‘non-Muslims’, closure of the French embassy, expulsion of the French ambassador and a parliament resolution against the ‘anti-Muslim measures’ by the French government. 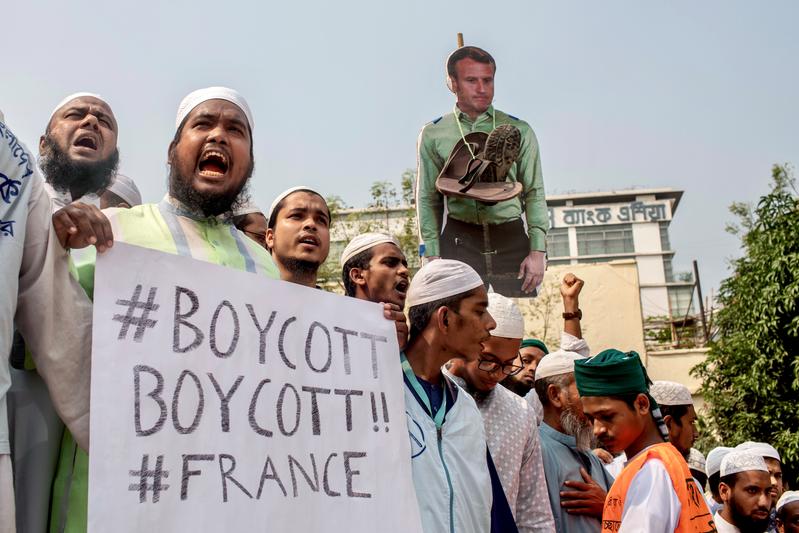 “It is indeed a tragic irony, but well-timed, that this Islamist surge was peaking in the Mujib centenary year – and a year before Bangladesh celebrates the Golden Jubilee of its hard-earned Independence from Islamist Pakistan,” said veteran Bangladesh-watcher Sukhoranjan Dasgupta, author of  Midnight Massacre on the 1975 military coup that led to Mujibur Rahman’s assassination with much of his family.

Only two of his daughters escaped the coup – one of them, Sheikh Hasina, is now the country’s prime minister.

Hasina’s son and her infotech advisor Sajeeb Wazed Joy said at a ceremony that Bangladesh will never move away from the “values of the 1971 Liberation War” that are anchored on secular, linguistic Bengali nationalism.

Also Read: Revisiting the Battle of Garibpur, a Precursor to the 1971 Bangladesh Liberation War

Bangladesh information minister Hassan Mahmud, on a slightly softer note, asked the Islamists to treat the Mujib statue as a ‘work of sculpture, as not as an idol’. “Trouble starts when the difference is not realised.”

The police has so far controlled the Islamist agitation marked by protest rallies, some violence and burning of public buses. But with the defacing of the Mujib statue at Kushtia, passions are running high in the secularist camp.

Three leading secular organisations have already taken to the streets in a show of strength, holding more than a dozen rallies across the country, calling for the immediate arrest of Babunagari and another Muslim cleric Mamunul Haque, who are accused of delivering ‘inflammatory speeches, incitement to communal violence and showing disrespect towards the country’s founding father’,

With two ministers of the Awami League government now threatening to similarly take on the radicals, the stage appears set for escalation.

A.K. Mozzamel Haque, minister for liberation war affairs, recently told mediapersons: “We will not only install the statue of our dear leader at Dholaipar but will also  erect one at Suhrawardy Udyan in Dhaka. We will see who stops us.”

Bangladesh is observing the birth centenary this year of Mujibur Rahman, whose call for freedom in March 1971 led to an eight-month civil war that ended Pakistan’s control over its eastern wing and Bangladesh’s emergence as an independent nation.

Suhrawardy Udhyan (formerly Ramna Maidan) is the sprawling ground in Dhaka, from where Mujibur Rahman announced Bangladesh’s independence on March 7, 1971.

“Anybody trying to cross their limits will bargain for broken necks,” said deputy education minister Mahibul Alam Chowdhury Naufel in a veiled threat to the Islamists. “Mujib statues will be installed wherever people want it .” 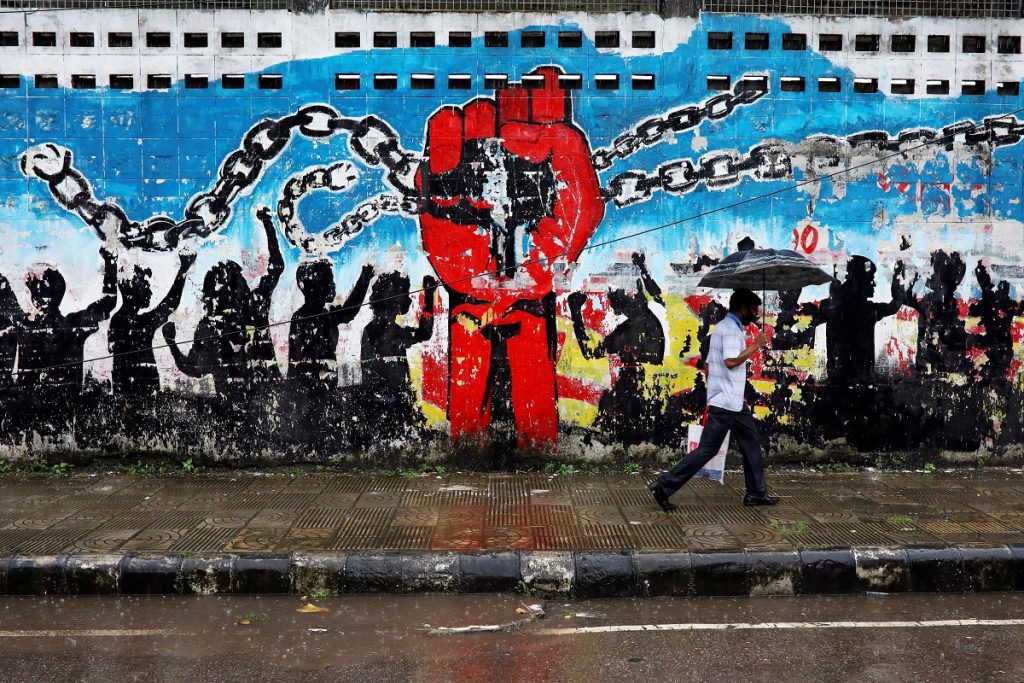 Pro-Awami League Facebook pages like ‘Supporters of Awami League’ have started a determined social media campaign to justify a Mujib statue, pointing to scores of statues that exist even in front of mosques in Muslim countries like Turkey and Pakistan.

Its supporters threatened to throw the Islamists ‘into the sea’ if they tried stopping the installation of the Mujib statue. “Go back to your dear Pakistan, if you are not happy here,” said one post in FB page ‘Supporters of Awami League’.

The League and its secularist allies usually see a ‘Pakistani hand’ behind Islamist upsurges since Islamabad opposed the 1971 War Crimes Trials and Islamist violence followed in Bangladesh.

Bangladesh is the world’s third-largest Muslim majority country after Indonesia and Pakistan.

But most Muslims in the country take immense pride in their Bengali linguistic and cultural identity that is syncretic and secular. But a belated swing towards radical Islam, partly fuelled by the rising Hindutva pitch in India, has raised the chances of a bloody confrontation like the one during the 2012-14 1971 War Crimes trials.

Scores of secular bloggers, publishers, folk artists, writers and intellectuals have been killed or injured in attacks by Islamist radicals over the past decade of Awami League rule, mostly after the violence erupted over the War Crimes trials.

On 1 July 2016, five Islamist radicals stormed a popular eatery in Dhaka and killed more than 20 diners, mostly non-Muslim foreigners but some Muslim Bangladeshis, who tried to protect them.

One Islamist fanatic was recently arrested for issuing a death threat to Bangladesh’s most popular cricketer Shakib Al Hassan for inaugurating a ‘Kali Puja’ in Kolkata.

Shakib denied doing that and apologised for ‘any hurt sentiment’.

But his former captain Mashrafe Mortaza, now a presidium member of the Awami League’s youth wing, took to the streets with his supporters to stop an Islamist rally on the Mujib statue issue in his area.

“Since the days of Pakistan, these Islamists have attacked the icons of our secular Bengali culture. It is a long-running ideological battle in which our home-grown radicals are backed by foreign militant groups and Pakistani intelligence agencies,” said Tarana Halim, a former actress-lawyer and until recently the country’s junior information minister.

Halim survived an Islamist attack on her life in 2001 and recently faced a flurry of cases for ‘defaming’ Bangladesh’s first military dictator Zia-ur-Rahman for directing a stage theatre Indemnity. Zia legitimised the pro-Pakistani Jamaat-e-Islami during his tenure and his wife Khaleda tied up an electoral alliance with the Jamaat.

Three years ago, the Hasina government removed a statue of the Greek goddess Themis from the premises of Bangladesh’s Supreme Court after the Islamist groups raised a furore. “That may have encouraged Islamist radicals,” says Dasgupta.

Awami League critics say that after strong action against the Hifazat during their 2013 agitation for a blasphemy law, the ruling party softened up and tried wooing it, perhaps to neutralise the Jamaat-e-Islami-Bangladesh National Party (BNP) coalition.

Even PM Hasina addressed their congregation before the 2019 parliament elections, a gesture Sukhoranjan Dasgupta likens to former Indian president (and Congress leader) Pranab Mukherjee’s visit to the RSS headquarters in Nagpur. “It is all about legitimacy.”

But now, the ruling party appears determined to neutralise an emboldened Hifazat leading an Islamist agitation against Mujib statues.

Home minister Asaduzzaman Khan Kamal has said that his government was ‘re-activating’ the 80-plus cases filed against Hifazat activists during their 2013 violent campaign.

The police has so far filed chargesheets in only 15 of these cases. Kamal admitted that ‘delay in prosecuting the Hifazat activists has been a big mistake.’

Mujib statues have come up in many places in Bangladesh before. Plans are afoot to build a 100-feet Mujib statue in the western town of Chuadanga, one of the rallying points of the 1971 liberation war.

“A statue is the best way to honour our tallest leader, this defies a religious interpretation. If we surrender before these radicals, we would have failed to defend the spirit that brought us freedom,” said barrister Tureen Afroz, a member of the legal team that prosecuted pro-Pakistani Islamist leaders responsible for the 1971 war crimes.

Afroz says that one of the charges against these leaders, some already hanged, was forcibly converting non-Muslims to Islam.

“That is only possible in a secular country like Bangladesh. I back Awami leaders who insist our basic values like secularism cannot be compromised. We will fight them in courts, on the streets, in the villages and towns.”

But the Islamists see these ‘basic values’ as a threat to their pan-Islamist project spanning Bangladesh and neighbouring Indian states.

“The Islamists are now raising this issue to mobilise opinion against the ruling Awami League after failing to bring them down in two successive elections. This is part of a conspiracy to destabilise the Awami League government,” said home minister Kamal.

Also Read: Sheikh Hasina Welcomes Pak Envoy to Residence in Yet Another Sign of Thaw in Frosty Relations

Once written off as a ‘basket case’ by former US secretary of state Henry Kissinger and its people derided as ‘termites’ by Indian home minister Amit Shah, Bangladesh has achieved rapid economic and social progress. Its human development indicators like infant and child mortality rates and educational gender disparity better than India. The IMF projects that Bangladesh’s per capita GDP will go past India this year.

“That has been possible because Bangladesh under the Awami League has remained grounded on secularism and democracy, but if Islamist radicalism gains ground, we will go the Pakistan way,” says former minister Tarana Halim. “That has to be avoided at all cost.”

“Or else the country will throw these trouble-seeking clerics into the dustbin of history,” he warned.

The country’s leading secular campaigner Shahriyar Kabir describes the confrontation over the Mujib statues as ‘the battle for Bangladesh’s soul’, a fight to keep Bangladesh secular and democratic and avert creating a ‘Bengali Pakistan’. Understandably, stakes are high.

Subir Bhaumik is a writer and columnist.